That Time the French Intentionally Bombed a Civilian Ship 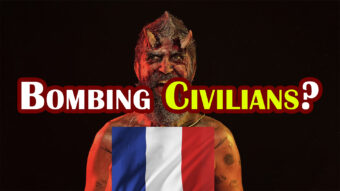 France detonated its first atomic bomb, codenamed Blue Jerboa, on February 13, 1960, becoming the fourth nation to do so after the United States, the Soviet Union, and Great Britain. At first the French tested their nuclear weapons in their then-colony of Algeria, but after the country gained its independence in 1962 testing moved to French Polynesia. These tests heavily contaminated Moruroa and neighbouring islands with Plutonium and other radioactive fallout. Particularly dirty was a September 11, 1966 test codenamed Betelgeuse. According to eyewitness accounts, visiting French President Charles de Gaulle grew so impatient that the device was detonated prematurely before atmospheric conditions were ideal, causing a large cloud of fallout to drift over American Samoa, Fiji, and the Cook Islands. Two years later, the Canopus shot, which tested France’s first thermonuclear or hydrogen bomb, left the island of Fangataufa so contaminated that it had to be abandoned for the next six years.

These tests sparked widespread protests in France and around the world, particularly from the Government of New Zealand, which for years had been campaigning for a nuclear-free south Pacific. Also heavily involved in the protest efforts was environmentalist group Greenpeace, which had recently been formed to protest American nuclear tests on the Alaskan island of Amchitka in 1971. In 1972, founding member David McTaggart answered a call by the organization for private vessels to sail to Moruroa to interfere with the French nuclear tests. Sailing from New Zealand in his yacht Vega, which he had rechristened Greenpeace III, McTaggart spent a month in the exclusion zone before being rammed by a French minesweeper and arrested. In the Press, the French Government reported that the Navy had rescued McTaggart from an accident at sea, while behind closed doors they offered him a $5000 bribe to stay away. Undeterred, McTaggart returned to Moruroa the following year, but met with an even more violent reception. French Marines stormed the yacht and badly beat McTaggart and his crew – nearly putting out McTaggart’s eye with a baton – and threw the group’s camera equipment and film overboard. However, one crew member managed to hide a camera under the boat, and when the pictures were finally smuggled out and released, they sparked an international outcry. Under intense political pressure, the French Government finally agreed to abandon atmospheric nuclear detonations, and in 1975 testing moved underground.

However, this did little to assuage environmentalists. The underground blasts caused significant fracturing of the basalt and coral foundations of the island, leading to fears that radioactive contamination trapped beneath the atoll would eventually leak into the environment. These fears were confirmed on July 25, 1979, when the 100kt Yvonne II device got stuck halfway down its 800 metre test shaft. With no way of forcing it deeper, the bomb was detonated anyway, blasting a large chunk out of the atoll rim, setting off an underwater landslide and tsunami that injured six people, and opening a large crack in the island 2 kilometres long and 40 centimetres wide.

The 1981 election of socialist President Francois Mitterand brought with it hopes that the testing would at last be ended. But contrary to his campaign promises, Mitterand ordered the testing to continue, and more nuclear weapons were tested under his tenure than any other French President. This betrayal sparked a new wave of global protests, and in 1985 Greenpeace dispatched its newest flagship, the Rainbow Warrior, to New Zealand to lead a flotilla back to Moruroa.

Built as a fishing trawler in 1955, Rainbow Warrior was acquired by Greenpeace in 1977 and participated in numerous anti-whaling and anti-sealing protests between 1978 and 1983. In 1984, in anticipation of the Pacific mission, she was fitted with a two-masted sailing rig, giving her nearly unlimited range and endurance. The voyage from Jacksonville, Florida, to Auckland, New Zealand took nearly four months, during which Rainbow Warrior undertook an extraordinary rescue mission. On March 1, 1954, the United States had detonated its first hydrogen bomb, codenamed Castle Bravo, on Bikini Atoll in the Marshall Islands. Due to a miscalculation, the bomb’s yield was nearly three times larger than predicted, sending a massive cloud of fallout drifting over the south Pacific including the neighbouring Marshallese island of Rongelap. In the thirty years since, the inhabitants of Rongelap had suffered from extremely high rates of cancer, birth defects, and other illnesses, and after unsuccessfully petitioning both their own and the United States Government, finally called on Greenpeace to evacuate them from the island. In May 1985 Rainbow Warrior transported 300 residents and their houses from Rongelap to Majetto and Ebeye islands in Kwajalein Atoll before continuing on to New Zealand. Unfortunately, this relocation proved to be a less than ideal solution, and overcrowding, unemployment, alcoholism, and suicide continue to plague the people of Kwajalein to this day.

Rainbow Warrior arrived at Auckland Harbour on August 7, 1985 and waited for the rest of the protest flotilla to assemble. But little did her crew know, events were already in motion to ensure Rainbow Warrior would never reach Moruroa. In early 1985, before the ship had even left Jacksonville, a plot was hatched by the General Directorate for External Security or DGSE – the action branch of the French Secret Service – to sink her at her moorings. The scheme, straight out of a James Bond movie, was codenamed Operation Satanic.

In total, nine agents participated in the operation. The first to arrive in New Zealand was French Army Captain Christine Cabon. Posing as environmental activist Frederique Bonlieu, in April 1985 she secured a job at Greenpeace’s Auckland headquarters and spent the next three months reporting on the Rainbow Warrior’s movements in the Pacific. On June 29, the charter yacht Ouvéa arrived at the remote Parengarenga harbour on the North Island, carrying DGSE combat divers Roland Verge, Jean-Michel Berthelot, and Gerald Adries, diving physician Dr. Xavier Maniguet, and their equipment: scuba gear, an inflatable zodiac boat, and explosive limpet mines. On the same day, Major Alain Mafart and Captain Dominique Prieur – posing as Swiss honeymooners Alain and Sophie Turenge, landed at Auckland airport. Rounding out the team were Lieutenant Colonel Louis-Pierre Dillais, the commander of the operation, and backup team Alain Tonel and Jacques Camurier.

On August 8, while the Rainbow Warrior was open for public viewing, Mafart and Prieur, still posing as tourists, toured the ship to conduct last-minute reconnaissance. Later that night, the nine conspirators met up and Mafart and Prieur, using a rented camper van, transferred the diving equipment and limpet mines to Tonel and Camurier, who had been chosen as the primary attack team. Then, on the evening of August 10, Tonel and Camurier swam up to the Rainbow Warrior, fixed two mines to its hull, then slipped away into the dark harbour and waited.

The first mine went off at 11:38 PM, sending a massive shudder across the deck. Wishing to avoid casualties, the bombers had timed the explosives to go off ten minutes apart so that the crew would have sufficient time to evacuate. But while the ship was initially evacuated, several crew members soon returned in order to assess the damage. Among these was Greenpeace photographer Fernando Pereira, who had gone below to recover his camera equipment when the second mine went off. He drowned as the Rainbow Warrior rapidly flooded and sank to the bottom of the harbour.

While at first the explosions were thought to be the result of an accident, an examination of the wreck soon revealed two large holes blown in from the outside. The bombing sent shockwaves through the international community, and the New Zealand Government quickly launched a nationwide manhunt. Ironically, despite their careful preparations the French agents were remarkably careless in covering their tracks, leading one newspaper to compare them to bumbling fictional inspector Clouseau and declare “All that was missing was a beret, a baguette, and a bottle of Beaujolais.” In particular, the yacht Ouvéa had come under suspicion by New Zealand Customs the moment it had arrived, and on August 15 police raided the yacht and questioned the crew. However, as the agents had already ditched all incriminating equipment, the police had insufficient evidence to detain them. The Ouvéa thus fled New Zealand and met up with the French attack submarine Rubis, which took the agents aboard and scuttled the yacht. Most of the other conspirators also managed to flee the country. The sole exceptions were Alain Mafart and Dominique Prieur, who, in an attempt to maintain their cover, had continued on their fictional honeymoon, sightseeing and skiing on the South Island before finally being arrested and charged with conspiracy, arson, and murder.

For the French Government, the bombing was a public relations disaster. While at first they denied involvement, the French embassy in Wellington declaring “The French Government does not deal with its opponents in such ways,” as the evidence continued to mount DGSE director Pierre Lacoste and Defence Minister Charles Hernu were forced to resign. Finally, on September 22, Prime Minister Laurent Fabius held a press conference in which he officially admitted France’s role in the bombing.

The New Zealand Government was shocked that a supposedly friendly nation could carry out such an operation on an ally’s soil, Prime Minister David Longe denouncing the bombing as an act of state-sponsored terrorism. On November 22, 1985 agents Mafart and Prieur plead guilty to manslaughter and were sentence to 10 years in prison. But the Mitterand government, determined not to face the consequences of its actions, threatened to impose a crippling trade embargo against New Zealand unless the agents were returned. In June 1986 the UN brokered an agreement whereby France agreed to apologize and pay $21 million in compensation to New Zealand and detain Mafart and Prieur on the French island of Hao for three years. However, the two agents spent less than two years on Hao before being released to France and returning to active service. None of the other conspirators ever faced justice.

Ironically, far from preventing further protests, the sinking of the Rainbow Warrior galvanized world opinion against French nuclear testing. In 1992, after nearly a decade of sustained protests – many lead by Greenpeace’s new flagship Rainbow Warrior II – the French Government agreed to abide by a testing moratorium put forward by Russia and the United States, which would eventually become the Comprehensive Test Ban Treaty. However, in 1995, barely three years into the moratorium, newly-elected President Jacques Chirac announced the resumption of testing at Moruroa. This decision was made due to doubts regarding the the TN-75 warheads carried by France’s submarine-launched ballistic missiles. According to the Government, the planned series of eight detonations would allow enough data to be collected for future warheads to be designed entirely using computers, making further physical tests unnecessary. Nonetheless, the announcement sparked a fresh wave of protests, most notably in Tahiti where protestors burned down the airport terminal at Papeete and caused $40 million in damage. In June 1995 Rainbow Warrior II lead another protest flotilla to Moruroa, which resulted in French Marines storming the ship with tear gas and smashing its radio. But as promised, on January 27, 1996 the last French nuclear weapon, codenamed Xouthos, was detonated beneath Moruora. Nine months later, France finally signed the Comprehensive Nuclear Test Ban Treaty, bringing 30 years of nuclear testing in the Pacific to an end.

After the bombing the Rainbow Warrior was found to be damaged beyond repair, and on December 12, 1987 was towed to Matauri Bay and sunk as an artificial reef. There she lies to this day, a powerful reminder not only of what acts Governments are capable of committing in the name of military supremacy, but also of the great things persistent, passionate protest campaigns can accomplish.