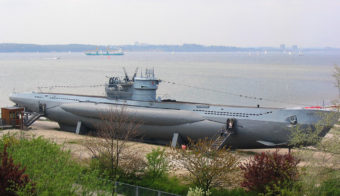 In the 1970s, BP oil pipeline workers came across a curious item about 12 miles southwest of Cruden Bay, Aberdeenshire sitting about 86 meters under the surface- an old German U-Boat. In fact, one of the last U-Boats ever sunk in WWII. Unlike so many of its fellow subs, however, this one’s demise came about owing to a sequence of events all stemming from someone flushing the toilet incorrectly… So what exactly happened here?

U-1206, a Type VIIC submarine, was officially ordered on April 2, 1942 and ultimately launched on December 30, 1943. About a year and a half later, On April 6, 1945, the shiny new craft with its crew of 50 men departed from Kristiansand, Norway on its first non-training patrol machine.

Pertinent to the topic at hand is that while most submarines at the time used a storage tank to stow the product of flushing on board toilets and other waste water, with stereotypical German engineering efficiency, U-boat designers went the other way and decided to eject the waste directly into the ocean.

On the plus side, this saved valuable space within the submarine while also reducing weight. The downside, of course, was that ejecting anything into the ocean required greater pressure inside than out. As a result, U-boats had long required that, in order to use the toilets, the ship would have to be near the surface

Of course, being so close to or on the surface is generally to be avoided when on patrol if a sub captain wants to see his ship not blown up. This resulted in crewmen who needed to purge their orifices while submerged needing to do so in containers, which would then be stored appropriately until the sub needed to surface and the offending substances could be ditched over board.

As you can imagine, this didn’t exactly improve the already less than ideal smell of the air within the sub while it was plodding away down under. But there was nothing much that could be done about this…

That is, until some unknown German engineers designed a high pressure evacuation system. As to how this system worked, in a nutshell, the contents of the toilet were piped into an airlock of sorts. Once the offending matter found its way into said airlock, this would be sealed and subsequently pressurized, at which point a valve could be opened which would eject the fecal matter and fluids into the sea.

Now, before we get into this, it should be noted that there are two versions of the story of what happened next- one version is stated by literally every single source we could find discussing this event on the interwebs, as well as repeated on the show QI and found in countless books on the subject. As for the other version, if you dig a little deeper, thanks to the good people at the Deutsches U-Boot Museum Archive, you can actually find the official account from 27 year old Captain Karl-Adolf Schlitt, who, minus a couple letters in his last name, couldn’t have been more aptly named for what was about to occur.

All this said, in both cases, the root cause of the sub’s sinking were the same- improper use of the toilet’s flushing mechanism.

That caveat out of the way, as the vessel was cruising along at around 70 meters below the surface and about eight miles from Peterhead, Aberdeenshire, Scotland, the popular version states that Captain Schlitt had need of evacuating his bowels and so, no doubt with dignity befitting a man of his stature and rank, did his business in the toilet. That done, he was now left to try to flush the thing.

Unable to figure out the complicated contraption, Captain Schlitt called in help from the “W.C. Waste Disposal Unit Manager”- literally the only guy on board officially trained in how to flush the toilet, apparently also known among the crew as (translated), “the shit-man”.

Unfortunately for the men that would soon die as a result, for whatever reason the crewman who was supposed to know how to flush the toilet made a mistake and turned the wrong valve…

That’s the popular version to which we could not find any primary document to support it, despite it being widely parroted. As for the official version, Captain Schlitt himself claimed,

In April 1945 U-1206 was in the North Sea off Britain. On board the diesel engines were faulty. We could not charge our batteries by the snorkel any more. In order to get the diesels working again we had put down about 8-10 miles from the British coast at 70mts, unseen by British patrols… I was in the engine room, when at the front of the boat there was a water leak. What I have learned is that a mechanic had tried to repair the forward WC’s outboard vent. I would say – although I do not have any proof – that the outer vent indicator either gave false readings or none at all.

As to why said mechanic was attempting to work on the toilet’s outboard vent while deeply submerged, that’s every bit as much of a mystery as to why an engineer trained in how to properly flush the toilet would have screwed it up so badly in the Captain Schlitt pooping version of the story.

Of course, it is always possible that the good Captain made up his version of things to avoid personal embarrassment and perhaps the other version came from crew members giving a very different account, but we could not locate any crew member’s version of events to verify that.

Whichever story is true, the result in either case was the contents of the toilet, if any, and the ocean outside shooting like a jet stream into the submarine.

Things were about to get a whole lot worse.

You see, as alluded to in Captain Schlitt’s account, the U-1206 was a diesel electric sub, featuring twin Germaniawerft F46 four-stroke engines, which charged a bank of batteries which, in turn, powered two electric motors capable of producing 750 horsepower combined. The problem was that the batteries were directly below the toilet area. According to Captain Schlitt, when the water rushed in, “…the batteries were covered with seawater. Chlorine gas started to fill the boat.”

As this was all happening, Captain Schlitt ordered the vessel to be surfaced. He then states, “The engineer who was in the control room at the time managed to make the boat buoyant and surfaced, despite severe flooding.”

So here they were, diesel engines down for maintenance, batteries soaking in seawater, having taken on a significant amount of said water, chlorine gas filling the ship, and on the surface just off the coast of enemy territory.

The nightmare for Captain Schlitt was about to get worse. As he noted in his account of events, “We were then incapable of diving or moving. At this point, British planes and patrols discovered us…”

With few options available, Captain Schlitt ordered various valves on the U-1206 be opened in order for it to fill with water, after which the crew abandoned the sub, with it shortly thereafter sinking.

The crew made their way to the Scottish coast on rubber rafts, but things didn’t go well here either. Schlitt states, “In the attempt to negotiate the steep coast in heavy seas, three crew members tragically died. Several men were taken onboard a British sloop. The dead were Hans Berkhauer, Karl Koren, and Emil Kupper.”

Ultimately 10 crewmen did make it shore, but just like their surviving compatriots at sea, were promptly captured.

In the aftermath, thankfully for just about everyone, just 16 days later, on April 30, 1945, Hitler bravely, and with no regard for his own personal safety, infiltrated the Führerbunker and single handedly managed to rid the world of one of the most notorious individuals of all time by putting a bullet through his own brain. About a week after that, Germany finally surrendered.

As for what happened to Captain Schlitt after, this isn’t clear, other than he appears to have lived to the ripe old age of 90, dying on April 7, 2009.