How Did WWI Pilots Shoot Through Their Aircraft Propeller? 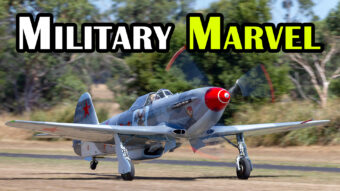 On June 7, 1912, Lieutenant Roy Kirtland took off from a field outside College Park, Maryland in a Wright Model B, the first aircraft ever purchased by the American Army Air Services. To his right sat Captain Charles Chandler, a Lewis light machine gun cradled between his legs. As Kirtland banked the aircraft 300 feet over the field, Chandler took aim at a white cloth banner staked out on the ground below and opened fire. It was the first time in history a machine gun had ever been fired from an aircraft, and it proved frighteningly effective, with a full 12% of the 47 rounds fired finding their target. The age of aerial warfare had begun, and the world would never be the same again.

Yet despite this promising start, when the Great War broke out in 1914 few armies knew quite what to do with their newfangled flying machines. At first aircraft were mainly used for aerial reconnaissance and artillery spotting, serving alongside tethered observation balloons. But many pilots carried pistols and rifles in case they were shot down behind enemy lines, and inevitably they turned these weapons on each other, leading to the first aerial duels. On August 25, 1914 Frenchman Roland Garros became the first pilot to damage another aircraft in combat, wounding a German airman with his pistol, while on September 7 Russian pilot Pyotr Nesterov scored the first ever aerial victory by ramming his French Morane aircraft into an Austrian Albatros, his action leading to the deaths of both aircrew.

As the Great War ground on and the strategic importance of air power grew, designers on both sides set about creating dedicated fighter aircraft with which to defend their airspace. But almost immediately they ran into a major problem. By 1914 most aircraft were of tractor configuration, with the engine and propeller in front of the pilot, and attempting to fire a machine gun through the propeller arc was likely to end in said pilot having a very bad day.

At first designers simply worked around the problem, building pusher-style aircraft with the propeller in the rear and the gunner in the front, such as the Vickers F.B. 5 Gun Bus, the first purpose-built fighter aircraft to enter service. But this solution proved awkward and unwieldy, pusher aircraft at the time being too slow and unmaneuverable to keep up with their targets. The very worst among these early fighters was French SPAD SA1, which placed the engine and propeller in between the pilot and gunner so that in a crash landing the unfortunate gunner would either be crushed or cut to pieces.

Other aircraft like the Bristol F.2 Fighter placed the gunner in a rear cockpit firing a flexibly-mounted machine gun at an angle, while still others like the Avro 504 mounted guns atop the wing to clear the propeller arc. But none of these solutions were ideal for a variety of reasons, and the ultimate goal remained to mount an aircraft’s guns forward of the cockpit, where they could be aimed by pointing the entire aircraft and reached by the pilot for reloading or to clear jams.

One early method of doing this was invented by none other than Roland Garros, who in December 1914 had the propeller of his Morane-Saulnier Type L monoplane fitted with metal wedges to deflect stray bullets. While crude, this installation proved surprisingly effective, with Garros scoring the first aerial victory using a machine gun fired through a propeller on April 1, 1915. Garros would score two more victories with this aircraft before being forced down behind enemy lines on April 18. While he attempted to burn his aircraft before being captured, he was unsuccessful, and his deflector-equipped propeller fell intact into German hands. But by this time the Germans had already developed their own solution to the propeller problem, and it was about to turn the tide of the air war.

In June 1915, a revolutionary new aircraft appeared in the skies over the Western Front: the nimble German Fokker E.1 Eindecker monoplane. Almost overnight, every other fighter aircraft became obsolete, and for nearly six months the German Imperial Air Service enjoyed near total air superiority over Allied forces, a period that came to be known as the Fokker Scourge. Much of the Eindecker’s effectiveness lay in its machine gun, which could fire safely and reliably through the propeller thanks to a clever device invented by Dutch engineer Anthony Fokker: the gun synchronizer.

Gun synchronizers are sometimes erroneously referred to as interrupter gear, implying that the mechanism interrupts the firing of the guns whenever the propeller is in the way. But this is not the case. WWI machine guns such as the German MG.08 had a firing rate of around seven rounds per second while aircraft propellers rotated at around 20 revolutions per second, meaning that even a two-bladed propeller would interrupt the gun up to six times per firing cycle, preventing it from ever firing. Instead, Fokker’s synchronizer used the rotation of the engine itself to fire the gun. In this system, a circular metal plate with two protruding cam lobes is fixed to the rear of the engine, the lobes being arranged at right angles to the propeller blades. To fire the guns, the pilot pulls a lever that lowers a cam follower onto the rotating plate. Whenever the propeller blades are horizontal and out of the way, one of the lobes strikes the follower, which in turn activates a mechanical linkage that fires the gun. Thus the gun operates not as a true machine gun but rather as a semi-automatic rifle whose trigger is pulled by the engine whenever the propeller is clear.

But even with this system, variations in engine speed and ammunition quality can still cause the synchronization to drift, leading to the inevitable destruction of the propeller and the aforementioned bad day for the pilot. Synchronizer mechanisms thus had to be adjusted for each individual aircraft. This was done by fitting a wooden disc to the propeller hub and firing the guns through it. The pattern of bullet holes was then used to adjust the angle of the firing cams so that the pattern of shot fell safely between the propeller blades.

While Fokker’s original design gave the German fighter aircraft a huge advantage in the latter half of 1916, it was a limited design that could only be made to work with a single machine gun, and proved fragile and difficult to maintain in combat. Fokker thus designed an improved system which moved the firing cams to the guns themselves and transferred the engine’s rotation to the cams using flexible drive shafts. As the firing cam on each gun could be adjusted individually, two or even three guns could now be mounted on the same aircraft. Introduced in the summer of 1917, the new system would remain the standard for the German Imperial Air Service until the end of the war.

Following the appearance of the Fokker Eindecker in June 1915, the British scrambled to develop synchronizer gear of their own. Their first attempt, the Vickers-Challenger Gear, wasn’t exactly the most elegant system, requiring the machine gun to be mounted to the left side of the engine. But sometimes good enough is, well, good enough, and the Vickers-Challenger Gear at least gave the Allies a fighting chance against the Fokker Scourge until April 1916, when the capture of a German synchronizer gear allowed the Sopwith Aircraft Company to reverse-engineer their own version.

But all these early British systems were rendered obsolete by the introduction of the C.C. Synchronizer, named after its inventors, Munitions Officer Major Colley and Romanian inventor George Constantinescu. Based on Constantinescu’s work on wave propagation through fluids, the C.C. Synchronizer used hydraulic oil to transmit sound pulses from the engine to the guns. Not only was the system universally adaptable to any engine and aircraft type, it proved far more reliable and easily adjustable than all other systems, and starting in November 1917 became the standard for all British fighter aircraft. Though the Germans captured many examples of the C.C. gear, they were never able to reverse-engineer it as they erroneously assumed it to be a standard hydraulic system. But by this time other factors like the British naval blockade of German shipping and the entry of America into the war had already turned the tide of battle in the Allies’ favour, and German pilots were never again to enjoy the same air supremacy as they had in 1915.

After the war mechanical and hydraulic synchronizers were largely replaced by electric types, but by the 1930s the use of synchronizers had largely fallen out of favour. The traditional fighter armament of two rifle-caliber machine guns mounted in the nose was becoming increasingly ineffective against the new generation of all-metal bomber aircraft, and aircraft designers began moving towards harder-hitting arrangements of large-caliber guns mounted in the wings. However, several nations such as Germany, Italy, Japan, and the Soviet Union, continued to use synchronized nose-mounted guns throughout the Second World War. Many of the war’s top-scoring aces, like Germany’s Erich Hartmann and Hans-Joachim Marseille, preferred nose guns as they did not lose accuracy with range, unlike wing-mounted guns which had to be harmonized to converge at a certain distance ahead of the aircraft.

The last aircraft to use synchronizers were Soviet Lavochkin La-11s and Yakovlev Yak-9s flown by North Korean pilots during the 1950-1952 Korean war. By this time propeller-powered fighters had finally given way to jets, eliminating the need for synchronization gear altogether. While the heyday of gun synchronizers was relatively brief, their impact on warfare is incalculable. Synchronizers were the key technology that turned the airplane from a marginally useful curiosity into a deadly and indispensable weapon.