March 13, 2020 Daven Hiskey 10 comments
JOJOs asks: I think we all want to know right now- what did people use to wipe before toilet paper? 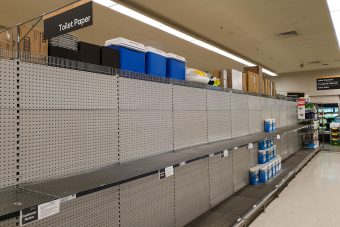 The first references of people using toilet paper dates back to the 6th century AD in the Chinese Imperial courts and amongst the other wealthy citizens of China.  This eventually spread throughout China and by the 14th century there was an annual manufacturing of around ten million packages of toilet paper in the Zhejiang province alone.

This however, did not catch on with the rest of the world for some time.  Indeed, a Muslim traveler to China in the 8th century noted “They (the Chinese) are not careful about cleanliness, and they do not wash themselves with water when they have done their necessities; but they only wipe themselves with paper.”

This brings us to the question of the hour- what did people use for wiping before toilet paper?

What was popular depended greatly on region, personal preference, and wealth.  Rich people often used hemp, lace, or wool;  poor people, on the other hand, would often simply poop in rivers and clean off with water, rags, wood shavings, leaves, hay, rocks, sand, moss, sea weed, apple husks, seashells, ferns, and pretty much whatever else was at hand and cheap or free.

As for the Ancient Romans, one of their favorite wiping items, including in public restrooms, was a sponge on a stick that would sit in salt water and be placed back in the salt water when done… waiting for the next person… Definitely don’t want to get the wrong end of the stick on that one… Ancient Greeks, on the other hand, often used stones and pieces of clay.

Fast-forwarding to more modern times, America’s favorite wiping item tended to be things like corn cobs and other such plant items, and, later, the pages of Sears and Roebucks, Farmers Almanac, and other catalogs.  The Farmers Almanac even came with a hole in it so it could be easily hung in bathrooms for just this purpose. Reading and wiping material in one.

On the other hand, the 16th century French writer Francois Rabelais, in his work Gargantua and Pantagruel, notes that after pooping, paper, he felt, was useless, “Who his foul tail with paper wipes, shall at his ballocks leave some chips.”  He instead recommended that “the neck of a goose, that is well downed” worked best.

In India and other middle eastern countries, the preferred method was, and in some cases still is, to wipe using nothing but your left hand and water and then, of course, wash your hand well afterward and don’t handle any food or the like with your left hand.

For seaman, the common thing was to use old frayed anchor cables, a bit of seawater for rinsing,  or other such things readily available.   The Inuit’s and other peoples living in frigid regions tended to go with clumps of snow to wipe with, which, other than the coldness factor, is actually one of the better options it seems compared to many other of the aforementioned methods.

The seeds of advancements in this arena started to be planted in the mid-19th century, however.

For example, around 1857, Joseph Gayetty came up with the first commercially available toilet paper in the United States.  His paper “The greatest necessity of the age!  Gayetty’s medicated paper for the water-closet” was sold in packages of flat sheets that were moistened and soaked with aloe (about 130 years ahead of his time as it wasn’t until the 1990s that toilet paper companies started doing this again).  Gayetty’s toilet paper sold for about 50 cents a pack (about $14 today), with 500 sheets per package.  This wasn’t terribly popular, presumably because up to this point most people got their wiping materials for free from whatever was at hand and didn’t find anything weird or gross about the way they were doing things.

Around 1867, brothers Edward, Clarence, and Thomas Scott, who sold products from a push cart, started making and selling toilet paper as well.  They did a lot better than Gayetty, presumably because their original toilet paper wasn’t coated with aloe and moistened, thus was much cheaper. Whatever the case, their product was just rolls of somewhat soft paper (though including splinters as manufacturing wasn’t awesome at this point. Of note here on this, in 1935, Northern Tissue boasted a “splinter free” toilet tissue in an advertisement, which would seem to imply that it was still somewhat common for toilet tissue to have the occasional splinter before that.)

Whatever the case there, the Scott company also had the somewhat innovative idea of putting the names of the companies that were buying the toilet paper on the paper, such as with the Waldorf Hotel. This was a huge hit with the companies they were selling to and helped them stay in business in the early going where Gayetty had failed.

Things really picked up steam on the toilet paper front though thanks to indoor plumbing.  This was both because there was nothing really to grab in an indoor bathroom to wipe with, unlike outdoors where nature is at your disposal.  And, of course, the age old Farmers Almanac and similar such catalogs also were not well suited for this purpose as in indoor plumbing the thicker paper tended to clog up the pipes.

Of course, for those of you in a region suffering from a toilet paper shortage today, toilet seat add-on bidets are a thing and typically cost less than $50 to buy and only about ten minutes to install. From there, not only will you be a whole lot cleaner, but your toilet paper usage will drop to almost nothing- just a bit needed for drying.