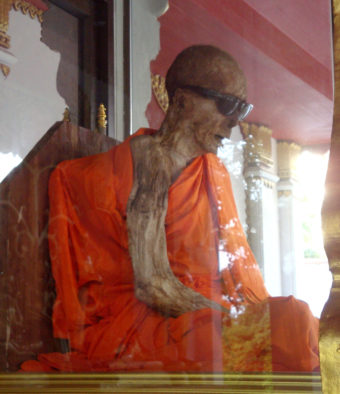 On the scenic Thai island of Koh Sumai, tucked away in the Wat Khunaram temple is the mummified body of one of Thailand’s most famous monks- Luang Pho Daeng. Remarkably well preserved, Luang Pho Daeng’s body was put on display sometime in the 1970s and is still there today, virtually unchanged from the day he passed away, with the notable exception of a giant pair of Ray-Ban sunglasses that were added later. So how does his body stay so naturally well preserved and why is he wearing Ray-Bans?

Born sometime in 1894 on Koh Sumai, Luang Pho Daeng first became ordained as a Buddhist monk in his twenties. However, he only remained a monk for a few months before he decided to abandon the pursuit to raise a family and live an otherwise normal life. That said, his brief time as a monk had a profound impact on Luang Pho Daeng’s life and guided his actions throughout the ensuing decades. For example, during WW2, Pho Daeng, who was a financially successful businessman during his adult life, donated large amounts of money as well as clothing and medicine to those in need and otherwise placed high value on all life.

It was also around this time, in 1944 at the age of about 50 years old that he, apparently with the support of his wife and six now grown children, decided to once again become a monk.

After being ordained, Luang Pho Daeng threw himself into studying Buddhist texts and became fascinated with various meditation techniques, soon becoming a master meditator, in particular of Vipassana meditation, which literally translates to “seeing clearly”.

His skill at meditation was such that he could reportedly meditate for upwards of 15 days at a time, during which period he’d neither move nor consume food or drink. Although the man himself claimed that he needed no nourishment during his marathon meditation sessions, he was frequently warned by physicians that he was causing severe harm to his body through his regular extended bouts of no fluid or food intake.

As you might imagine, during these sessions, he lost a great deal of weight through muscle, fat, and fluid loss and was often so weakened by his meditation that he needed to nursed back to health via fluid resuscitation and the like, before ultimately he would once again resume meditating.

The true extent of the damage Luang Pho Daeng did to his body while meditating was largely lost on his followers thanks to the decidedly monk-like stoicism with which he was able to endure the withering effects of severe dehydration and hunger. As a result, Luang Pho Daeng became something of a celebrity amongst the residents of Koh Sumai and many travelled to Wat Khunaram temple to learn from him.

In addition to his impressive meditative abilities, Pho Daeng was known for his strict adherence to a simplistic lifestyle, on a normal day eating only one, simple meal and apparently always eating from the same bowl.

According to the monks of Wat Khunaram where Luang Pho Daeng served as an abbot, shortly after his 79th birthday in 1973, Luang Pho Daeng foresaw his own death and made it known that he would mummify himself, which is totally possible if excruciating and an extremely time consuming process that, given the time of his eventual death, meant he must have started the process long before he made this announcement.

In preparation for his anticipated success at this, he requested that his disciples build him an “upright coffin” made of glass in which his body should be put on display if he was successful in his goal of achieving self-mummification. His ultimate aim being that his remains would serve as an eternal testament to the Buddhist belief in the transience of human existence if he was successful.

Unfortunately for those of us who like the details, exactly how he prepared himself for self-mummification was never recorded by the monks of his temple. That said, one known method used by certain types of Buddhist monks was a total of a nine year process, about six of which the monk would be alive for.

The monks would begin by ceasing eating any food except various nuts and seeds, with some accounts stating that they were also allowed to eat fruits and berries. They would also begin a regimented program of heavy physical exercise, which they would continue throughout this first period that lasted one thousand days.

During the next one thousand days, the monks would further restrict their diet by only eating bark and various roots, again with some accounts stating that they were also allowed to eat a limited amount of fruits and berries. Near the end of this period, they would drink a concoction made from the sap of the Urushi tree. This tree’s sap is mildly poisonous and is normally used as a natural lacquer. Ingesting the drink caused the person consuming it to vomit frequently, further restricting the body’s ability to obtain nutrients from the sparse diet they ate. They would also rapidly lose bodily fluids due to vomiting. As a side effect, this sap also worked as a preservative in their bodies.

In the final stage of self-mummification, the monk’s body would be little more than skin and bones. If the monk survived to this point, he would lock himself into a stone tomb that was just large enough for him to fit in, sitting in the lotus position, which is a position he would not move from until he died. The tomb itself contained an air tube, so that the monk could live for a time after being entombed. It also contained a bell, which the monk would ring on a daily basis to let those outside the tomb know he was still alive.

While in the tomb, the monk would sit in the lotus position and meditate until death. Once the monk died and, thus, no longer rang the bell each day, the breathing tube would be removed and the tomb sealed for the final thousand day period of the ritual. At the end of this period, the tomb would be opened to see if the monk was successful in mummifying himself. If he was, the preserved body would be put on display in the temple. Having successfully demonstrated mastery over the physical, the priest would also then be declared a Buddha.

Whether some semblance of this was what Pho Daeng did or not isn’t known. Whatever the case, after his preparations were complete on an unknown date in 1973, he sat down and meditated for the final time of that particular life.

When his followers discovered that he’d passed away while meditating, they hastily constructed the upright coffin he’d requested and placed his body inside to wait and see if it would decompose or not. If it did decompose, he left instructions that his remains were to be cremated. If it didn’t, as mentioned, he requested they be put it on display.

In keeping with his final wishes, when his body failed to decompose normally, he was then put on display in Wat Khunaram.

Nearly three decades later, in 2002, his remains were still externally in remarkably good shape, spurring researchers at the Bioanthropology Research Institute to study the corpse. In the process, among other things, they performed a radiographic analyses on it.

Amazingly his organs, including brain, are all still remarkably well preserved, more or less having shrunk from dehydration, but otherwise still there and intact. In fact, one of the only parts of  Luang Pho Daeng’s body that actually rotted away were his eyes, which sunk into his skull shortly after his death.

This became something of an issue for the monks of the temple wanting to display Luang Pho Daeng’s corpse as per his final wishes, because children who visited the temple were understandably terrified of his eyeless visage, rather than in awe of his self-mummification.

After contemplating the issue for some time, the monks of the temple came up with the rather novel solution of simply covering Luang Pho Daeng’s eye sockets with a pair of Ray-Bans, which would not just mask the eye sockets, but also make him look rather stylish.

Luang Pho Daeng has rocked this look ever since. And as a result of both his startlingly well-preserved state and timeless fashion sense, his former body has become the temple’s most famous attraction.

Incidentally, one other interesting thing the study by the Bioanthropology Research Institute discovered in examining the body was that at some point a Gecko or Geckos managed to lay eggs in his eye sockets and skull, as well as in his mouth and throat…

Moving swiftly on, the monks of Wat Khunaram don’t mind visitors taking pictures or even recording videos of Luang Pho Daeng body (so long as they do so in a respectful manner) and the temple is free to the public, meaning images of this fashion conscious mummy are plentiful for those who can’t make the trip.

Speaking of crazy things certain monks can do, some Tibetan monks can control the temperature of their skin through meditation.  Specifically, they have been shown to be able to raise their skin temperature, measured from their toes and fingers, as much as 17 degrees Fahrenheit, while keeping their core temperature normal.

The scientists also got a chance to document the monks spending a night out on a rocky ledge in the Himalayas.  The monks were dressed in their simple wool robes with no extra insulation and slept on the cold rocks separated from one another.  The altitude was 15,000 feet and the temperatures reached zero degrees Fahrenheit (-18 Celsius) as they slept, apparently comfortably, through the night.  With as little insulation as they were wearing and laying on the cold rock separated from one another, this should have killed the monks.  But they were all fine and the cameras didn’t even catch them shivering at any point. When they woke, they walked calmly back to their monastery, not seeming to notice the cold at all, unlike the scientists and camera crew who were all bundled up and freezing by morning.

It is not yet known how the monks manage to do this, but magnetic resonance imaging scans of the monks’ brains while they meditate have shown, to quote, “marked differences in blood flow to the entire brain”, Benson explains. “At the same time, certain areas of the brain became more active, specifically those that control attention and autonomic functions like blood pressure and metabolism.”