January 3, 2020 Karl Smallwood 16 comments
Literally Everyone asks: Why are outhouses traditionally depicted with a crescent moon on the door? 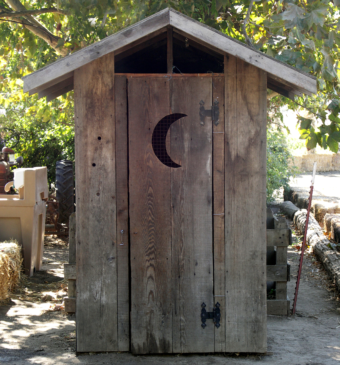 In all the years we’ve been answering questions from our abnormally attractive readers, one that has popped up in our inbox and in comment threads more times than any other is some form of the question “What’s the deal with crescent moons on outhouse doors?” Well, after nearly a decade of doing this, we’ve finally decided to look into it. So here we go.

While it’s commonly stated in a shocking number of otherwise seemingly authoritative sources, including no less than a book called Outhouses- a 128 page guide to all things outhouse- that the origin of the crescent moon on the outhouse is centuries old, the truth is that all evidence seems to indicate it’s an extremely modern phenomenon. As to this commonly touted relatively ancient origin, this is purportedly all to do with gender. For example, in Outhouses, it’s claimed that “it’s a widely held historical view” that the crescent moon is a holdover from a time when illiteracy was rife. Supposedly before the adoption of the more familiar male and female bathroom symbols, it was common to use a crescent moon to denote that an outhouse was for women and a sun to denote that it was an outhouse for men. This supposedly being a nod to the fact that women have long being associated with the moon and men supposedly with the sun.

From here, opinion is divided on why the crescent moon rather than the sun caught on as the defacto symbol for an outhouse, with perhaps the most common explanation being that men’s outhouses fell into disrepair because men would just do their business in the great outdoors as God intended, without need of such an enclosure. Thus, only the women’s outhouses were left regularly used and the others went the way of the dodo.

As you might have guessed from the number of “supposedlies” in our previous paragraphs, there is absolutely no evidence supporting that being the origin of the crescent moon on outhouses. And, in fact, the evidence we do have seems to indicate that that hypothesis is about as accurate as the contents of that political chain-letter forwarded to you by your great-grandmother.

So what does the evidence at hand actually show? First, not just the sun thing, but the crescent moon idea just wasn’t a thing pre-dating the 20th century at all. And, in fact it, wouldn’t be until around the mid-20th century where the the crescent-moon part of that duo started to gain some traction- well past the days when outhouses were commonly used.

While some of the more traveled among you might now be pointing to historic sites in the United States you have visited that have outhouses that have been there going back potentially even a couple hundred years and feature a crescent moon cutout, it should be noted that in every known instance, the cutouts were put there in more modern times to fit people’s expectations. As one Dr. Adam Brooke Davis of Truman State University and the Missouri Folklore Society states, these are all examples of “Historical retrofitting”.

Of course, as you might expect, descriptions of outhouses and photographs and the like are relatively rare, and surviving examples even more so. As for those surviving examples that have not been “retrofitted”, we have such cases as an eight person, communal outhouse on the Thomas Leiper Estate. This 18th century outhouse is helpfully made of stone so has survived the centuries, but no such cutout or symbology is present anywhere on it, door or otherwise. Other similar surviving examples when not “historically retrofitted” likewise are lacking any crescent moon or sun to be seen anywhere.

As for the earliest known documented mention of this sun/moon dichotomy for outhouses to mark whether it was for someone of the male or female persuasion, this doesn’t get a mention until the 1972 book The Little Red Schoolhouse: A Sketchbook of Early American Education. In it, it claims, “The woodshed was often a lean-to attached to the schoolhouse, but the most most accepted arrangement was to place it between the schoolhouse and the privy, with a fence separating the boys’ entrance from the girls’. The ancient designation of privy doors was to saw into them a sun (for boys’ toilet) and a moon (for girls’ toilet).”

Naturally, this description is considered somewhat suspect on that point, and indeed one of the oldest photographs of an outhouse dates back to 1917, and shows a picture of a girls’ outhouse at an American school, before and after renovation, with neither version having any such cutouts anywhere.

Or as Dr. Davis sums up concerning his extensive research into the matter, “I have never…seen a crescent moon shape in an actual outhouse I could confidently date to earlier than about 1960…”

On that note, as for the first known actual instances of the crescent moon cutout on outhouses, as alluded to, these wouldn’t start showing up until around the mid-20th century, first in cartoons and comics. For example, if you troll through examples of old Linen Postcards from the 1930s to the 1950s, you’ll see that on the 1930s side of things, depictions of outhouses in said humorous postcards had no crescent-moon adornment, but in later examples this seemingly became ubiquitous, whether on the door, above it, or on the upper parts of the side walls of the outhouse.

So who came up with the crescent moon trope and why?

Well, this isn’t clear. Historically outhouses did frequently feature openings in the rafters for ventilation and light purposes. Some even had cutouts in the doors, but often diamond, V, or heart shaped (or some speculate on this one originally intended to be more bottom shaped as it would look hanging over the hole). These door cutouts were also seemingly for ventilation and light purposes and also sometimes thought to function as the door handle of sorts.

As the aforementioned Dr. Davis sums up concerning the door cutouts,

My grandparents’ farm near Hannibal Missouri had an outhouse built between 1920 and 1940. The door, as faced from the outside, had its hinges left, and no knob or pull. Rather, it had a cutout… so that one could slip one’s fingers in to grasp it. It permitted light, ventilation and easy opening. I suggest that this simple expedient came to have some traditional force, and once hardware became available, was still felt to be useful or attractive, and was displaced to the center of the door, to break up the flat plane….

Of course, if this is correct, it still doesn’t explain why the crescent moon cutout is the one latched onto by popular media in the United States and later beyond vs. other options, or even whether the popular media is actually the one that first created it.

For that, let us offer our own little hypothesis. While nobody knows for sure, because the crescent moon trope seems to have originated not on real outhouses, but rather in various comics and other humor based media around the mid-20th century in the United States, perhaps it may have been referencing the practice of dropping your drawers hanging your butt over something- aka mooning someone.

Only 99% speculation, the timing of this revolution of outhouse design seems to line up exceptionally well for this to have been the case.

Before we get into that, going back a couple thousand years, we have the first known reference of someone disrespecting someone else via mooning them. This was documented by Flavius Josephus in 80 AD in his The Jewish War, where he records an event that apparently took place near the Temple in Jerusalem a few decades earlier,

one of the soldiers pulled back his garment, and cowering down after an indecent manner, turned his breech to the Jews, and spake such words as you might expect upon such a posture. At this the whole multitude had indignation, and made a clamor to Cumanus, that he would punish the soldier; while the rasher part of the youth, and such as were naturally the most tumultuous, fell to fighting, and caught up stones, and threw them at the soldiers. Upon which Cumanus was afraid lest all the people should make an assault upon him, and sent to call for more armed men, who, when they came in great numbers into the cloisters, the Jews were in a very great consternation; and being beaten out of the temple, they ran into the city; and the violence with which they crowded to get out was so great, that they trod upon each other, and squeezed one another, till ten thousand of them were killed, insomuch that this feast became the cause of mourning to the whole nation, and every family lamented their own relations.

So, yes, the first known mooning in recorded history apparently not only included a fart in the general direction of someone, but resulted in a riot and the death of reportedly over ten thousand people… From this fact, we’re going to go ahead and crown this the deadliest fart in history and we challenge everyone to come up with one to beat it…

Moving swiftly on, as to the association with the moon and mooning someone, this goes back at least to the 18th century in England. Most pertinent to the topic at hand, leading up to and during the mid-20th century, “mooning” became an extremely common slang term in the United States for the practice of dropping your drawers and waggling your buttox at people- right when the crescent moon seems to have made its debut as the symbol on outhouses in comedic media.

And as to why the crescent moon, rather than full, if our mostly speculative hypothesis is correct, we’d guess because a circle isn’t so apparently representative of a moon as is a crescent moon, nor as accurate a depiction of a butt crack, which is presumably how the association between butts and the moon came to be in the first place way back in Merry ol’ England.

Whatever the case, to sum up, in outhouses that did have cutouts in the doors historically, it would appear these were generally for ventilation and illumination purposes and to function as a door handle when placed on the door. Contrary to what is popularly reported, the crescent-moon cutout does not seem to have been a thing historically, and rather seems to be a media-generated, or at least, popularized, invention. And we’re speculating the various humorous outlets who seem to have started this settled on the crescent-moon in their drawings as the cutout of choice in such comedic drawings to fittingly represent someone’s exposed butt-crack, in this case hanging over a hole in the ground, not too dissimilar from one of the other most popular cutouts for outhouses- the fictitious heart-shape.