April 22, 2019 Karl Smallwood
Peter R. Asks: If I had to, what parts of my body are healthiest to eat and offer the most caloric benefit?  Essentially, what parts of me should I eat first to maximize my survival chances in some extreme situation?  Would eating feces be of any benefit? 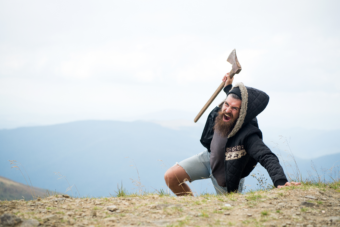 While of course how long one could survive without food and water varies dramatically based on exact scenario, on the more pressing issue of water, it would appear that if someone stopped consuming this life sustaining liquid at all (including not getting any from food), their death would generally occur within a maximum of about 14 days. This grim figure has been gleaned from data collected from the notes of terminally ill or end of life patients in hospitals who forgo artificial sustenance and their bodies are slowly allowed to die. In many of these cases, the individual is either bedridden or in a coma, meaning their caloric and water needs are potentially minimized, so this seems a good rough upper limit.

Unfortunately for our thoroughly average 5 ft. 9 inch, 195.5 pound everyman named Jeff, who is about to find himself in rather dire straits, death for him is likely to occur much faster. Beyond the fact that he’s likely to be more active than a person in a coma, these figures don’t necessarily immediately apply to him because of something known as adaptive thermogenesis. Adaptive thermogenesis is the term used to describe a unique quirk of physiology, which is often colloquially referred to as “starvation mode”. In a massively overly simplistic nutshell sure to trigger more than one medical professional out there, when the body is put on a restrictive diet for a significant length of time, it adapts to function less optimally, but at least still function, lowering the sustenance requirements it needs in a variety of fascinating ways that would take an entire video of its own to cover.

Since terminally ill people and people in comas are typically already in this state when their sustenance is completely cut off, their bodies will, in some cases at least, likely survive longer than poor Jeff who, if he was randomly cut off from sustenance without warning in a survival situation would probably not make it more than about 3-4 days.

Of course, Jeff could last longer if he ate something because many foods contain quite a lot of water, his most pressing need. While body parts are among those food items that are jam-packed with H20, that liquid was already in Jeff anyway. So there is going to be no benefit to consuming his own body part in this situation, unless of course the limb just happened to have gotten lopped off outside of his control and he wants to recoup what he can from the lost appendage.

But let’s say that Jeff has an unlimited supply of water.  Now he just needs some food, which the human body is literally made up of. Thus, Jeff targets those sweet, sweet calories within himself.

How many calories? Figures on this can vary wildly based on the individual in question as you might expect, but for a ballpark average for such an everyman as Jeff, he probably has about 80,000 calories in him, at least, according to figures compiled by one Dr. James Cole at the University of Brighton.

As for the legs, again with the caveat that this can vary wildly based on a specific individual, for a ballpark average, each leg contains around 7,000-8,000 calories (enough to sustain Jeff comfortably for around three and a half days).

If Jeff got really desperate he could cut off one of his arms which would net him an additional 2,000 or so calories. Another day of comfortable eating.

Since he needs that other arm to perform surgeries, cook, eat, etc., let’s say Jeff, who is also now an expert surgeon, also removes a lung, a kidney, 70% of his liver, his gallbladder, his appendix, spleen and his testicles (all things that can removed from the body without killing you if done properly). We stopped just short of calculating the caloric value of a human penis because, come on, we have to leave Jeff something to do the rest of the day while he awaits rescue.

Based on available figures from the aforementioned British professor and, where needed, supplementing his calorie content numbers with animals with comparable organs to our own, this would all provide roughly 3,000 or so calories, give or take.

Finally, if Jeff took the bones from his severed limbs and boiled them in water, he could create something akin to bone broth, which contains about 130 calories per litre. It turns out that you can make about a gallon of bone broth with around 7 pounds of bones.

Your skeleton makes up about 15% of your total body weight and your legs and a single arm constitute just shy of 40% of your total weight. Taking Jeff’s weight which we’ve already established as being 195.5 pounds, Jeff’s legs and arm would provide around 12 pounds of bone, or enough to make a gallon and a half of bone broth. This amounts to in the ballpark of 900 calories.

Being resourceful, Jeff isn’t going to stop at limbs, organs, and bone, though. After all, a byproduct of eating produces another food source- feces. Unfortunately, there’s no study that has been done that we could find telling us definitively the calorific content of human poop. That said, from limited studies we did find on human poop’s nutritional makeup, and from many more done on mice feces, it would appear on average feces contains about 10% of the calories eaten previously, with the caveat that this does vary based on a variety of factors- work with us here people. If you want a better number for the calories in human feces when that human is eating human legs, arms, and organs, you feel free to Google to your heart’s content. We’re already a little uncomfortable with how our search history looks after this one.

In any event, if Jeff consumed in the ballpark of the 2000-2500 calories per day to maintain his original physique before he found himself in his little predicament, his poop may contain as many as 250 calories. Contrary to popular belief, his poop would also be reasonably safe to eat provided he kept it fairly sanitary after squeezing it out- the five second rule isn’t really a thing. A dropped turd is most definitely going to pick up some icky things from the floor.

So, doing the math, if Jeff literally cut off or removed every extraneous part of his body save for a single arm, then ate his excrement, he could conceivably find himself with a total of around 20,000-22,000 or so calories, or around 10 days of comfortable sustenance. And, hey, with the loss of each extra body part, there’s fewer calories needed to support the remaining, meaning Jeff’s going to be able to stretch things out even further in this little fantasy land we’ve created.

Of course, in a real life scenario, slicing yourself up would by definition do severe damage to your body, expose yourself to infection, result in a loss of blood and hence reduce your hydration level, and just generally place a lot more demands on your body to keep on keeping on- when traumatically injured, your nutritional needs actually go up.

And, in the end, your body already had you covered.

You see, it turns out beyond attempting to get more efficient about caloric usage naturally if you stop giving the body enough to function optimally, the human body is also amazingly efficient at using stored sustenance in your various bits, particularly fat, muscle, and, to a lesser extent, bone. Sure, at the end of it, Jeff’s body fat percentage might be on the lean side and his lifts on the bench press may be vastly reduced from their former no doubt beast-mode levels. But he’ll be alive and whole anyway.

Thus, as with so many of life’s problems, the solution was inside himself all along… including the feces and urine which could potentially give a very slight benefit the first time if he wanted to muscle them down.

So to sum up the answer to the question posed by our new favorite reader, while certainly your body contains a lot of useful calories should you consume them directly, it turns out it’s already really good at more or less eating itself without you needing to cut anything off. That said, should you be stranded with a pleasantly plump companion in such a survival scenario, you might want to go check out our article- Do People Who Resort to Cannibalism in Survival Situations Get in Trouble? Knowledge is power people.