Has Anyone Ever Actually Tied a Damsel in Distress to a Railway Track?

January 31, 2019 Karl Smallwood
Dan P asks: We see in the old movies and cartoons that the villain ties their victim to the railroad tracks to kill him or her in a gruesome way thought the hero always rescues the victim in the nick of time.Are there any documented cases of someone being tied up and left to die on the railroad tracks? 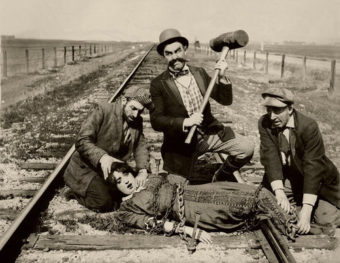 A manly hero coming to the rescue of a beautiful damsel in distress has been a common trope since literally the earliest days of theater, going all the way back to the Ancient Greeks. As the centuries passed, mythical creatures were replaced by more mundane dangers- notable to the topic at hand is the common trope of top hat clad, magnificently mustachioed villains tying buxom damsels to railway tracks while a dashing hero rushes in to save the day. So where exactly did this railway trope actually come from and are there any known cases of someone actually doing this in real life?

To begin with, while your first instinct might be to assume that this trope originated during the era of silent films, this isn’t quite correct, though it is true you can find isolated examples of this in a few surviving films.

For example, the 1913 film Barney Oldfield’s Race for a Life is commonly touted as the first film to feature the “chained to a railway” scene, including a mustachioed villain wearing a fetching hat, a beguiling beauty tied to the railway tracks and a daring, last-minute rescue by a handsome hero. The thing is, this was a comedy specifically created to lampoon the trope.

In another similar example, we have the 1917 film Teddy at the Throttle in which the fair maiden, played by Gloria Swanson, humorously rescues herself from peril because the “dashing” hero arrives too late.

To find the true origin of the trope, at least in terms of what popularized it, we have to go back to stage plays, with it commonly stated that Augustin Daly’s 1867 play, Under the Gaslight by American was first. This does indeed contain such a scene, in this case where a character named Snorkey is tied to the rails by a man named Byke. As he’s doing this, Byke exclaims,

I’m going to put you to bed. You won’t toss much. In less than ten minutes you’ll be sound asleep. There, how do you like it ? You’ll get down to the Branch before me, will you? You dog me and play the eavesdropper, eh I Now do it if you can. When you hear the thunder under your head and see the lights dancing in your eyes, and feel the iron wheels a foot from your neck, remember Byke!

Thankfully for Snorkey, in a sort of reversal of the gender roles in the scene, a damsel named Laura manages to come to his rescue and free him just before the train arrives.

While, as noted, Daly is commonly given credit for coming up with the idea, it turns out this isn’t correct at all; it was simply his play that popularized it. For example, sticking with theater, if you dig a little deeper, a similar scene also appeared in a previous play called The Engineer released in 1863 in Britain.

Nevertheless the effect the scene in Daly’s play had on the audience was so good that rival playwrights quickly began including “railroad scenes” in their own melodramas, much to Daly’s chagrin.

To try to protect the concept he felt he’d come up with, he decided to sue those who used it in their own plays. Despite instances like a short story, Captain Tom’s Fright, released before Daly’s play featuring an extremely similar scene being used by the defense, the courts weren’t persuaded and the case became a landmark one in the history of copyright law in the United States. It was specifically ruled that copying the essence of a scene closely in other plays did indeed infringe on intellectual property rights, even if no words were copied and it wasn’t literally the exact same scene.

Nevertheless, theatre promoters heroically ignored this ruling, continuing to rip Daly off anyway, presumably dually under the assumption that Daly wouldn’t get around to suing everyone and that if enough modifications were made to the scene they’d probably get away with it either way.

Similarly back in the UK, the trope also spread like wildfire with one Nicholas Daly noting in his paper, Blood on the Tracks: Sensation Drama, the Railway, and the Dark Face of Modernity, “In October 1868 the railroad scene could be witnessed in five different plays at five different London theaters.”

So that’s how the trope was popularized, but has anyone ever actually been tied to a railroad track in that way? It turns out, while it’s rare- yes. There are several known instances of this happening.

For example, according to the August 31, 1874 issue of the New York Times, a Frenchman identified by the paper as simply “Gardner” was killed in this exact manner after being robbed and left tied to a railway track. However, in this specific case the unfortunate Frenchman was able to partially free himself, with the result being only the lower half of his left leg being severed. Gardner survived long enough to offer a description of his attackers to the authorities before succumbing to his injuries.

It’s noteworthy that this and several other known cases in the following decades came after the ubiquity of the trope in theater, despite that trains had been around long since. Thus, much like the idea of mobsters putting “concrete shoes” on people to send them to sleep with the fishes, it would seem this was first thought up by entertainers only to be copied in various isolated instances by real life people.

As for a more modern example of the train trope, and one which actually includes a damsel, this involves another Frenchman, Guillaume Grémy, in 2017. Unfortunately for all involved, not only was Guillaume not sporting a magnificent moustache and top hat at the time of his crime, he also completely took the fun out of the thing.

You see, Guillaume was suffering from severe depression at the time. When efforts to get back together with his estranged wife, Émilie Hallouin, failed, he decided on her 34th birthday to bind her to a high-speed railway track using, to quote a police spokesman, “strong adhesive tape”, and then stood over her as the train approached.

Sadly, real life being real life, there was no dashing hero to save the day here and tragically for the couple, their toddler child and other respective children, the pair were killed instantly when the train hit them at a reported 200 MPH…

So, yes, indeed there have been several known cases of people being murdered via being placed on railroad tracks, but sadly, as far as we can tell, rescue after the villain places the victim on the tracks seems to be something only found in fiction.