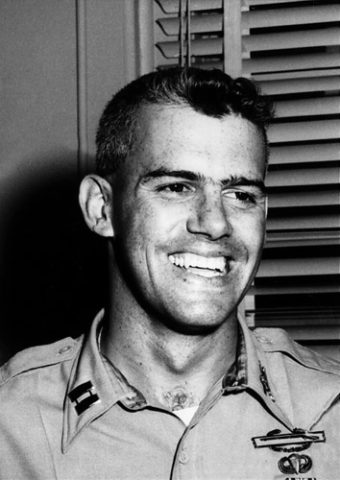 Described as “the bravest man you’ve never heard of”, Captain Humbert Roque Versace’s story is one that is not as well known as it should be. So allow us to remedy that by discussing how he spent two years basically being a huge pain in the ass for his captors in a Vietnamese POW camp- so much so that he managed to become the first person in the U.S. Army to earn a Medal of Honor for his conduct as a prisoner of war.

Born in 1937 in Honolulu, Hawaii, Versace was the son of decorated army colonel, Humbert Joseph Versace, and famed author, editor, and pilot Tere Rios, who, among other things, wrote The Fifteenth Pelican, which would inspire popular 1960s TV show The Flying Nun.

The oldest of five children, “Rocky” as he was known was a smart and headstrong child who would later be described by his brother, Steve, as being “infuriatingly opinionated” and “If he knew he was right, he was absolutely atrocious…”- a trait that played a role in his earning a Medal of Honor.

Like his father before him, Versace joined the army, attending West Point Academy in 1959 and graduating with honors. Over the next two years Versace received training as both an Army Ranger and a parachutist, eventually rising to the rank of Captain during a tour in North Korea as a tank platoon leader. In 1962, the newly minted Captain Versace was assigned to serve in a mostly ceremonial role with the distinguished Old Guard at Fort Meyer. Soon enough, however, he volunteered to serve in Vietnam.

Prior to being shipped off to Vietnam, Versace received yet more training, this time to become an Intelligence Officer. As part of his training, he received a crash course in Vietnamese, a language he was fluent in by the time his tour of duty began in May of 1962.  This, combined with Versace’s fluency in French, made him an invaluable asset to the Army and incredibly popular with the South Vietnamese forces and civilians of the Mekong Delta.

His fluency in Vietnamese was important to Versace as his dream was to eventually become a Catholic priest and missionary to the people of South Vietnam. Thus, Versace spent much of his free time as a soldier there volunteering at local orphanages, assisting townspeople and securing vital and not-so-vital supplies to make life a little easier for the locals. In regards to the latter, in addition to securing food and building materials, Versace also continually wrote letters to schools in the United States asking for toys and learning materials for the children of the villages he visited.

A year later, with his tour of duty coming to an end, Versace applied to stay in Vietnam for another 6 months despite receiving news that his application to seminary had been accepted. As it would later emerge, Versace had decided that he still wanted to be a priest but his decision to embark on a second tour of duty was born out of an earnest desire to continue helping the orphans he’d become so attached to during his time in the country.

Two weeks before this second tour was set to end, Versace volunteered for a highly dangerous mission to assist South Vietnamese troops take down a North Vietnamese command post located deep in the U Minh Forest.

During the mission Versace and his fellow soldiers were ambushed and overrun by Viet Cong forces. Hopelessly outnumbered, he called for a tactical retreat, along with First Leiutenant Nick Rowe and Sergeant First Class Dan Pitzer, covering the exit of South Vietnamese soldiers with sustained rifle fire as a hail of bullets tore overhead. During the ensuing firefight, Versace was hit in the back and legs by bullets and shrapnel as he stood, completely exposed to the hellstorm raging around him firing his weapon into jungle.

Running low on bullets, Versace charged the enemy in an apparent effort to single-handedly beat them all to death with the butt of his rifle. During his charge, he was injured once more, falling to the ground and being quickly set upon and beaten by the enemy forces.

After being physically overpowered, Versace, along with Pitzer and Rowe, were stripped of their weapons and boots, before all three were marched barefoot into the jungle towards a POW camp…. Which is when Versace got mad.

For the next two years Versace made life for his captors hell as they tried and failed to do the same to him. Strikingly handsome with a tall, imposing frame and a magnetic personality, Versace became the pseudo-leader of his fellow POWs. Frequently tortured and interrogated, he refused to give them any information and relentlessly badgered his captors about their treatment of his friends and comrades, citing articles from the Geneva Convention and using his time in isolation to think up ever more creative insults.

Tired of his antics, in an effort to keep him away from other POWs, Versace was eventually locked inside of a bamboo cage away from everyone else, which didn’t stop him from boosting the morale of everyone around him by cheerily singing pop songs. When the Viet Cong locked Versace in an isolation cage even further away from the rest of the POWs, he just sang louder. When they began gagging him so that he couldn’t speak or sing, he started leaving messages of support in the toilet.

Not content to just sit around singing, during his imprisonment, Versace escaped four times, each time being captured not long after. In the first instance, he was so severely injured at the time that he couldn’t walk, but instead crawled away from the camp in agonising pain through marshland. As you might imagine, it didn’t take the Viet Cong very long to locate him once they’d discovered he’d managed to escape.

Each time he was recaptured, Versace was noted as telling his captors that he’d do it again the first change he got, prompting them to redouble their efforts to break him. As you can probably guess by now, these efforts failed miserably.

At first the Viet Cong tried “re-educating” Versace, attempting to brainwash him with political propaganda. Versace reportedly spent much of his time during these sessions loudly arguing with his indoctrinators.

Along with inspiring his fellow POWs, this saw to it that the bulk of his captor’s frustrations and anger were directed towards him, something his fellow POWs were also reportedly very grateful for. As noted by President George Bush some four decades late, “By focusing his captors’ anger on him, he made life a measure more tolerable for his fellow prisoners, who looked to him as a role model of principled resistance.”

In addition to inspiring POWs, Versace’s tenacity inspired the people of Vietnam; when the Viet Cong tried to parade a beaten and bloodied Versace through local villages, he’d offer words of encouragement in Vietnamese to those gathered. This was much to the annoyance of the Viet Cong who’d warned against such insubordination by threatening to viciously beat him within an inch of his life if he did so.

Frustrated with their inability to break this man, the Viet Cong eventually made the decision to execute Versace. When he was informed of this, he reportedly responded by singing God Bless America for 5 hours straight the night before his execution was to take place. This song was the last thing any of his fellow prisoners ever heard from Versace.

Following through on their threat, Rocky Versace was executed on September 26, 1965. His body was never recovered, but a headstone was placed above an empty grave in Arlington National Cemetery.

For his conduct as a POW, initially Versace only received a silver star, the Army’s third highest award. This was something his fellow soldiers didn’t feel reflected the full extent of his actions and sacrifice while a POW, resulting in a concerted effort from a “hodgepodge group of soldiers and civilians” aware of the full details of what Versace endured to see him awarded America’s highest military honor.

In 2002, this request was finally fulfilled, with one of Versace’s brothers, Dr. Stephen Versace, accepting the medal from then President George Bush. In his speech, Bush noted:

In his defiance and later his death, he set an example of extraordinary dedication that changed the lives of his fellow soldiers who saw it firsthand. His story echoes across the years, reminding us of liberty’s high price and of the noble passion that caused one good man to pay that price in full.

In addition to being the first American POW to earn a Medal of Honor for his conduct during his time as a prisoner, Versace is an inductee in the Pentagon’s Hall of Heroes as well as a member of the Ranger Hall of Fame.

Said his former fellow prisoner Sergeant Dan Pitzer of the man himself,

Rocky walked his own path… for that guy, duty, honor, country was a way of life. He was the finest example of an officer I have known… Once, Rocky told our captors they might as well kill him then and there if the price of his life was getting more from him than name, rank, and serial number… He got a lot of pressure and torture, but he held his path… He was brutally murdered because of it… I’m satisfied he would have it no other way…. [He] valued that one moment of honor more than he would a lifetime of compromises.