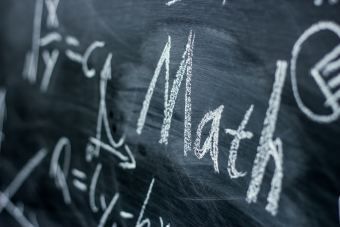 Aluminium or aluminum, zee or zed, and removing u’s from certain words or not- among the many discrepancies between American and British English, perhaps none conjures as much religious fervor as math vs. maths.

So which one is correct?

Well, really neither is technically more correct than the other. It’s all just language and conventions different groups of people want to use. At the end of the day, language is all about communicating effectively and the rules that surround it are meant to serve that end, not language serving the rules and conventions, contrary to what many an individual who refuses to accept the evolution of language might otherwise try to have you believe.

As nobody is likely to get confused at all what someone is saying when they say math or maths and saying one or the other is the accepted way to do it among two rather large groups of English speakers, the idea of saying one is definitively right and one is wrong is a little rich.

But that’s not terribly interesting. So let’s stoke the fires a bit and see if we can’t shed some light on how this particular difference between American and British English came to be.

To begin with- which was first, math or maths? It turns out, while you’ll often read that the math lovers of the world win this one, this isn’t actually correct, though it is true that even in the UK it’s not been until the last half century or so that saying maths was more common than math.

But to start with, Math. as an abbreviation for mathematics dates back to at least as early as June 4, 1847 where W.G. Hammond wrote in his diary “It rained so that we had a math. lesson indoors.”

Again, it is commonly stated that Maths is a later invention, first attested to in 1911 in a letter from English soldier and poet Wilfred Edward Salter Owen where he wrote, “The Answers to Maths. Ques. were given us all this morning.”

It is next seen again after this in 1917 in a September edition of Wireless World with “Extremely ‘rusty’ in ‘maths.'”

However, it turns out there is a much earlier known instance of someone writing maths, interestingly, occurring in America. In his Letter from the Secretary of War written by War Secretary John C. Calhoun in 1818, a man referred to as “Chs. Davies” is listed as “ass. prof. maths.”

There is also a third variation of this popping up in 1836, where it states, “Edward C. Ward, Prof. of Math’s”

“Math’s” also appears in The Merit Roll of the Cadets of the Virginia Military Institute, published sometime around 1854. It turns out one T.C. Rice and P.H. Worhsam were, to quote, “Deficient in math’s.”

(No doubt had they known over a century and a half later they’d be called out on this in a very public way and it would be all anyone would ever remember of them, they would have studied harder.)

In any event, in these cases, the apostrophe simply functions as the placeholder for the missing letters between the math and the “s”.

It should be noted here that in all these early variations of math, maths, math’s, it’s not thought people actually pronounced the abbreviations this way, instead just using it as a short hand way to write mathematics, which would then be spoken fully, similar to how you’d say “Professor” rather than “Prof” when encountering the abbreviation “Prof.” as in the previous example.

It wouldn’t be until around the mid-20th century that it appears people actually started to use math and maths as proper spoken words, rather than just a written abbreviation.

Unsurprisingly, for no known reason, even though both were used on either side of the pond for a time, the “math” version of the abbreviation ended up being more popular than its plural-sounding “maths” in the United States, whereas eventually the opposite was true in the UK. However, it’s also noteworthy that it wouldn’t be until around the 1970s that maths would overtake math as the proper form in the UK. Before that, usage was a bit more mixed on that end of the pond.

This all brings us to the argument often leveled at the pro-math speakers of the world as the definitive reason people should say “maths” and not “math”- that mathematics is plural, thus its abbreviation should be.

Similarly, there is no such thing as a “mathematic” to have more than one of. (Or, at least, not anymore- at one point mathematic was more or less used to describe a polymath.)

In these latter cases, nobody says “econs” or “lings” if they are going to shorten the words; they say “econ” and “ling”. (Physics is another beast altogether as, to our knowledge, nobody verbally abbreviates it. And even if it was Phys, it wouldn’t be clear whether the person was contracting the ending s or simply including the fourth letter.  Though perhaps we really should pronounce this abbreviation as “Fizz” is a rather appealing name for a field of science.)

Despite all this, particularly when querying humans of the British persuasion, folk-etymology tends to lead said individuals to assume that, despite their own usage demonstrating the contrary, mathematics must be plural because of the trailing s.

It may even be that this idea is the reason the s was originally tacked on at the end of the abbreviation in the first place, with some individuals thinking mathematics was plural, despite common usage. There is some evidence in support of this where around the time these abbreviations started to pop up, you’ll find a few instances of people actually treating mathematics as plural. For example, in Baldwin and Cradock’s Library of Useful Knowledge- Mathematics, publishing in 1836, they say “Now the mathematics are peculiarly well adapted for this purpose…”

In truth, mathematics is simply a mass noun (like music, water, faculty, garbage, furniture, evidence, humanity, luggage) that has an ‘s’ on the end, similar to physics or economics and, again, is considered uncountable and generally treated as singular in the way its used.  (Although, it is noteworthy that some mass nouns that refer to a group of some thing, like faculty, can go either way in usage- for instance, “The media is sensationalizing the news.” Or “The media are sensationalizing the news.”)

You might at this point be wondering if mathematics is not plural, how did that “s” get there in the first place? While there is some debate here, this seems to have come about owing to a common convention around the time mathematics popped into English where it was en vogue to use a plural name for different fields of study, such as economics, linguistics, physics, acoustics, etc. This practice seems to have been adopted borrowing from the related terms in Ancient Greek, like physika or, in this case, mathematika.

But at the end of the day, both math and maths are just abbreviations for mathematics that turned into proper words, with some choosing to go with the contracted version of the abbreviation instead of the shorter “math” and it just sort of catching on one way or the other from there.

Neither math nor maths is more correct than the other in the general case, though if you happen to be writing for an audience that you know predominantly uses maths, you should probably go with that, and vice versa, unless you’re just one of those people who like to watch the world burn.

And either way- god help you if you’re a British person working with many American script writers and talking to a world-wide audience on a platform particularly known for commenters with no filter… The problem of math vs. maths is just the tip of the iceberg for that sorry individual.