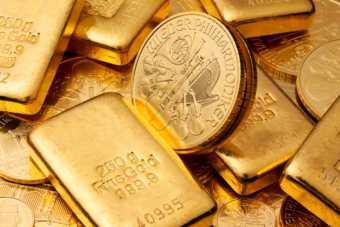 While it’s likely others had tried it before, the first surviving documented attempt of someone trying to turn something to gold in a (relatively) scientific fashion occurred around 300 AD. The proto-scientist in question was a Greco-Egyptian named Zosimos. During his lifetime, it’s thought that he wrote nearly thirty books about alchemy, but most of them have been lost to history. What we do know is that in his work he focused mainly on the use of vapors, specifically sulfur vapors which do cause some things to turn yellow. For example, he found that when mixed with liquid mercury, the resulting substance becomes a yellow solid, but it wasn’t gold.

From there for nearly two thousand years famed scientists like Isaac Newton, Roger Bacon, Robert Boyle, and Jabir ibn Hayyan all tried their hand at making gold. All failed, but did give the world numerous other advancements as a result of their work. As science historian Lawrence Principe noted in 2014, they “were amazingly good experimentalists.”

This brings us to more modern times and one of the most distinguished scientists of the 20th century you’ve probably never heard of- Glenn T. Seaborg.

Seaborg was far from being a no-name chemist with a crazy vision of turning lead into gold when he decided to make the attempt in 1980. For example, in 1941, he led the team that first discovered/produced/isolated the element plutonium. This led to the United States pursuing a program to make plutonium for use in their atomic bomb project, which later morphed into the top-secret Manhattan Project which Seaborg also worked on. (Although, along with many other scientists who worked on the project, he strongly lobbied for doing a public demonstration of a nuclear explosion to show to Japan, rather than actually using the bomb against them.)

All in all during his lifetime he helped discover ten elements (via creating them in a lab), which ultimately saw him receive a Nobel Prize in chemistry in 1951. He also discovered or helped isolate well over 100 isotopes, most notably Iodine-131, which if you’ve ever known someone with certain thyroid diseases (including some types of thyroid cancer), they may well still be alive, or have had their life extended, thanks to this one.

Along the way he became the chairman for the Atomic Energy Commission, advising and working for US Presidents Kennedy, Johnson, and Nixon. During his time in that role, he successfully lobbied for the nuclear test ban treaty prohibiting the testing of nuclear devices in the atmosphere or under the sea. He also strongly advocated for increased funding for science education in schools, better science curriculum, and increased funding in pure scientific research. He’s also the only chemist in history to have an element named after him while he was still living- seaborgium.

This brings us to creating gold.

In 1980, the Seaborg and a group of other scientists used a particle accelerator to propel beams of carbon and neon nuclei at nearly light speed into foils of the heavy metal bismuth- you know, the stuff you find in relatively large quantities in Peptol-Bismol, used for shotgun pellets, and a variety of other applications.

Why bismuth, rather than the originally planned lead? It is simply easier to isolate gold from bismuth than it is from lead. However, producing gold from lead would have been no more difficult.

As for the result, when they were rifling through the carnage that was the result of the high speed collision between neon, carbon, and bismuth, the physicists discovered the they had successfully made several isotopes of gold.

Of course, none of this was economical in the slightest. According to Seaborg, “It would cost more than one quadrillion dollars per ounce to produce gold by this experiment.” The going rate for gold in 1980 was about $590 an ounce…

Still, regardless of cost, finally after at least a couple thousand years of effort by some of the finest minds in history, a human had finally created gold from something else.