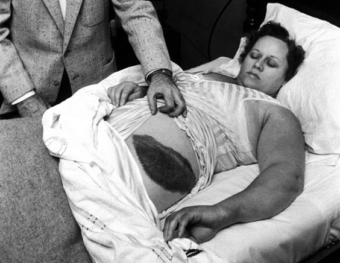 On June 21, 1994, a Spanish man by the name of Jose Martin was out for a drive with his wife when he got definitive proof that the Universe doesn’t like him, or, at least, doesn’t like his car. How? Well, it dropped a nearly 2 kilo hunk of space rock that just moments ago had been travelling at several thousand miles per hour through his windshield….

Fortunately for Martin and his wife, the meteorite hit the dashboard instead of them and then ricocheted into the backseat. Amazingly, the only significant injury to the humans present was nothing more than a broken finger suffered by Martin- an injury we speculate he sustained while flipping off the sky as hard as humanly possible.

According to a later report, authorities were initially hesitant to believe that Martin had been run off the road by a rogue chunk of stone from the heavens, instead of the more typical type from something Earth based. But upon further investigation, among other evidence in favor of Martin having told the truth about how his car got smashed up was a reported 200 kilos of other meteorites in the general area, suggesting that this was just a small piece of a much larger meteorite that had broken up in the Earth’s atmosphere, as meteorites are wont to do.

The same can’t be said of another car the universe decided to express ire against- a 1980 Chevy Malibu owned by an 18 year old girl named Michelle Knapp.  Knapp had just recently purchased the car from her grandmother for $400 when, on October 9, 1992, she was sitting in her parents house in Peekskill, New York watching TV and heard what sounded like a car crash outside. Upon going out to investigate, she found the rear right of her car had been smashed in, with a large hole through the smashed area. Directly under that spot on the car was a bowling ball sized meteorite.

Initially, she did not recognize this fact and just called the police who determined it was an act of vandalism. However, upon slightly more educated investigation, the object that struck the car was determined to be a meteorite that had probably been traveling around 200 mph (320 km/h). No word on whether the officers in question then attempted to arrest the Universe for its blatant and unapologetic act of vandalism.

While initially perturbed about the damage to her car, especially after her insurance company refused to pay, deeming the damage had been caused by an act of God, the whole thing worked out for Knapp in the end. The Knapps sold the meteorite for $69,000 (about $120,000 today) and even made a tidy profit on the car too, selling it as a curio to one Iris Lang for a reported $10,000 (about $17,000 today).

The car still today occasionally gets shown around at various museums along with pieces of the meteorite that struck it. In fact, in 2012 the broken tail light from the struck Chevy was sold for $5,000, because apparently some people have just too much money on their hands.

This all reminds us of one of our favorite eBay facts- that one of the first items sold on eBay shortly after its launch in early September of 1995 was a broken laser pointer. When eBay founder, Pierre Omidyar, emailed the person who bought the broken laser pointer for $14.83 ($22.40 today) to make sure he knew it was broken, the man told him “I’m a collector of broken laser pointers…”

In any event, perhaps the unluckiest person to be on the receiving end of a merciless meteorite attack is one Ann Hodges. While it’s probably happened many times before in the vast history of humanity, she is the first definitively proven person to have ever been hit by a meteorite.

The event happened in 1954 when the 31 year Hodges was napping in the living room of her home. And it’s here we’d like to just point out that Hodges lived across the street from the Comet Drive-In… Clearly the Universe couldn’t ignore such an opportunity for sweet, sweet cosmic irony.

The meteorite fragment that struck Hodges weighs approximately 8.5 pounds (4 kg) and first hit the roof of her home, breaking through the roofing material and boards. It then nicked a rafter and busted a hole in the 3/4 inch wooden ceiling of their living room. Not done with its little rampage, it then struck a radio and bounced off it to hit the sleeping Hodges in the hip and on her arm. Luckily, she did have some padding in the form of two thick quilts draped over herself.

When she was first struck, Hodges didn’t actually realize what had happened and jumped up thinking there had been some sort of explosion in the house. After seeing the rock, though, and feeling the pain in her hip and on her arm, she called the police and subsequently spent the day at the hospital.

The Police initially thought the “rock” was just a bit of burnt limestone that was common in the area. Eventually, a geologist determined that it was likely a meteor, a fact that was later confirmed after the U.S. Air Force confiscated the meteor for further testing.

While Ann Hodge’s husband was bent on selling the meteor and their landlord wanted the meteor for himself to sell to help pay for the damages to the house, after a lot of arguing about who actually owned the hunk of space ire, Ann decided to instead donate it to the Alabama Museum of Natural History.