March 6, 2018 Karl Smallwood
Tanya G. asks: Why did the Village People dress up in those outfits? 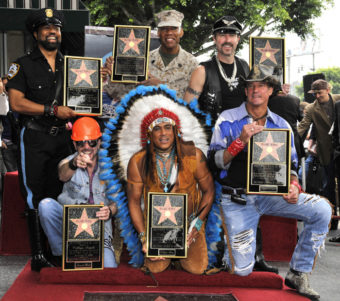 The creation of the Village People is directly attributed to French composer and producer Jacques Morali, a gay man who wanted to create disco music gay men would appreciate. Moreli, a legendary disco beat-smith who was responsible for producing a string of disco hits in the early 1970s, was approached by a struggling singer called Victor Willis with a demo tape in 1977. Morali liked the demo and came up with the idea of packaging Willis as a member of a group called, you guessed it, Village People. As to why he chose the name, Village People, this was a nod to the thriving gay community in Greenwich Village, New York.

Morali, using his clout in the disco world, saw to it that his new creation was signed to Casablanca records and soon after the Village People released their first self-titled album in 1977, with Willis the only member of the “group”. To maintain the illusion that Village People was an actual group and not a carefully crafted gimmick, Morali employed extensive use of vocal layering and backup singers while recording and mixing the aforementioned album.

Initially there was little problem with there only being one Village Person, but soon enough the album started gaining traction and the “group” began receiving offers to perform live in clubs around New York. As he couldn’t just send Willis out to sing on his own, Morali hired a team of dancers and backup singers to support Willis on stage.

So where do the crazy outfits the group wear come into this? Again, Morali was looking to craft a band that would appeal to and somewhat represent certain facets of gay culture at the time. It was during the process of researching how best to implement that when inspiration struck.

According to Morali’s business partner, Henri Belolo, the look of the Village People was inspired by an experience he and Morali had in a Greenwich gay bar, Les Mouches, which was having something of a costume ball. Specifically Belolo would recall in an interview with disco-disco.com that,

I was talking to the gay community about what they liked, what they wanted to listen to musically, and what was their dream, their fantasy. One day [producer Jacques Morali and I] were walking in the streets of New York. I remember clearly it was down in the Village, and we saw an Indian walking down the street and heard the bells on his feet. We followed him into a bar. He was a bartender — he was serving and also dancing on the bar. And while we were watching him dancing and sipping our beer, we saw a cowboy watching him dance.

The Frenchman Morali, who was already a bit enamoured by American culture and stereotypes, had a lightbulb go off in his head. He stated in an interview with Rolling Stones, “I say to myself, ‘You know, this is fantastic’—to see the cowboy, the Indian, the construction worker with other men around. And also, I think in myself that the gay people have no group, nobody to personalize the gay people, you know?…”

Thus, he ultimately approached the man dressed as a stereotypical depiction of a Native American, Felipe Rose. Rose explained that he chose that outfit as his father was Lakota Sioux. As they got to know each other, Morali laid out to Rose his plan for a new disco group. Rose stated of this,

Jacques showed me a sketch drawing of what looked to me like the group, with me drawn in, and a cowboy and construction worker and a biker. He said, “We’ve built a group around you darling, and I’m gonna make you famous.” I thought, “Oh God. Jesus Christ, what is this man doing? This is an awful idea.”

Eventually Morali nailed down all of the roles that he believed were simultaneously universally recognisable (at least to the American man) and embodied the macho, masculine ideals he felt typified that particular element of the gay scene. These were soldier, police officer, construction worker, cowboy, biker, Native American and sailor, some combination of which has served as the basis of the group ever since.

To fill out these roles, Morali placed an ad in the paper that simply read:

Macho Types Wanted: Must Dance And Have A Moustache.

As the group already had its Native American, the casting was to find the construction worker, cowboy and biker (also sometimes referred to as the leather man). Oddly, Willis himself initially didn’t wear a costume on stage (something you can see in early music videos released by the group) and it wasn’t until the group’s fame grew that he decided to dress as either a policeman or a sailor when performing. Another early member of the group, Alex Briley, similarly performed sans a costume, but quickly adopted the persona of an all-American GI when the “look” of the group became one of its trademark selling points.

It should be noted here that, contrary to popular belief, being gay was not a prerequisite of being in the band and several band members over the years were/are not. As original band member (cowboy) Randy Jones, who is gay, noted:

We didn’t start as a gay group, and not everyone in the group was gay — that’s an incorrect notion… The Village People was a mixture of ethnicity, races, lifestyles, sexualities, sexual orientations, it was a true village. It was a mixture of everything…

Despite this, given their band was specifically formed by Morali to represent gay subculture, it’s no surprise that not only was their iconic look crafted to reference said culture, but many of their songs are dripping with double-entendres and references that mainstream audiences at the time generally missed, which was a very good thing for the popularity of the band given attitudes of the era in which the band was topping the charts.

Nowhere is this more apparent than the Village People’s biggest hit, “Y.M.C.A.”

Morali was inspired to write the song after seeing the letters on the side of a building and asking what they meant. Band member David Hodo (construction worker) later recalled,

It was 1977, and we were leaving a photography session on 23rd Street. Jacques Morali saw the big pink YMCA on 23rd and asked, “What is this YMCA, anyway? “And after laughing at his accent, we told him the Y was a place where you could go when you first came to New York when you didn’t have any money — you can stay there for very little. And of course, someone joked, “Yeah, but don’t bend over in the showers. “And Jacques, bless his heart, said, “I will write a song about this!”

In a retrospective of the song’s genesis and eventual success, the aforementioned Randy Jones expanded upon this story, stating:

I took Jacques there three or four times in 1977, and he loved it. He was fascinated by a place where a person could work out with weights, play basketball, swim, take classes, and get a room. Plus, with Jacques being gay, I had a lot of friends I worked out with who were in the adult-film industry, and he was impressed by meeting people he had seen in the videos and magazines. Those visits with me planted a seed in him, and that’s how he got the idea for “Y.M.C.A.”…

Hodo would further ring in on of the song, “Y.M.C.A. certainly has a gay origin. That’s what Jacques was thinking when he wrote it, because our first album [1977’s Village People] was possibly the gayest album ever. I mean, look at us. We were a gay group. So was the song written to celebrate gay men at the YMCA? Yes. Absolutely. And gay people love it.”

Despite this, Michael Musto of the Village Voice notes that Morali seemingly went out of his way to write “every song with a plausible-deniability factor that the Village People still use to rebuff allegations of targeting a gay audience”.

Or as professor at Johns Hopkins University called Dr. Drew Daniel once so succinctly put it:

The good, clean fun at the surface level of the lyrics means that ‘Y.M.C.A.’ has this incredible capacity to circulate in different contexts. If people really thought they were singing about gay hook-ups in the steam room, they would not necessarily participate.

As to how the now iconic moves that go with the chorus of the song came about, the band members themselves have mildly differing stories as to the origin, though in all cases it would seem it was an audience inspired set of moves, rather than originally planned. For example, Randy Jones states,

We were flying up from South America for the show, and we worked on the choreography on the airplane — handclaps, turning, marching in place…stuff like that. Well, the audience at this particular taping was a bunch of kids bused in from a cheerleader camp. The first time we got to the chorus, we were clapping our hands above our heads. And the kids thought it looked like we were making a Y. So they automatically did the letters. We saw this and started doing letters with them. It was purely audience-generated, which is probably why it’s still so popular. And that’s great for me, because it keeps the checks coming in every six months.

So just to recap, a gay Frenchman created the Village People, named them after a region of New York known for its thriving gay community, had them sing gay themed music aimed at gay men in a gay way, including dressing in outfits inspired directly by those worn by gay men going clubbing. Morali and co. ultimately pulled the whole thing off making the band one of the most iconic of the disco era all the while with few outside of the gay community getting the references here, which given attitudes of the era, if we were Morali would have provided us with no end of private chuckles.

On a similarly humourous note, the music video for the band’s hit In the Navy was notably filmed on an actual frigate, the USS Reasoner (whose motto was officially “Fidelity”), thanks to the group’s manager securing a deal with the U.S Navy. The deal was that the Navy would get to use the song for free in Navy recruitment advertisements and in return the band would be given access to the military hardware for their shoot.

What makes this particularly hilarious is that around the same time the Navy was allowing a group representing certain facets of gay culture to sing aboard a Navy frigate about the navy being a place “Where you can find pleasure…”- with original intent to use this music video in Navy recruitment ad campaigns- they were spending millions of dollars attempting to route out any gay people from their ranks… These efforts included a hilariously inept search for a woman named Dorothy, who they were convinced knew every gay person in the military.

In further later efforts to get rid of any lesbians as well, Vice Admiral Joseph S. Donnell issued a memo noting how these women could be identified.  To quote him, “Experience has shown that the stereotypical female homosexual in the Navy is hard-working, career-oriented, willing to put in long hours on the job and among the command’s top professionals…”  (We can’t make this stuff up.)

In any event, unfortunately for the irony of it all, the Navy ultimately scrapped plans to use the Village People’s In the Navy in their ad campaigns.