Can the Queen’s Guard Really Not React to People While on Duty?

August 16, 2017 Karl Smallwood
Gianna D. asks: On movies the guards outside of Buckingham palace can’t move while on duty, is this true? 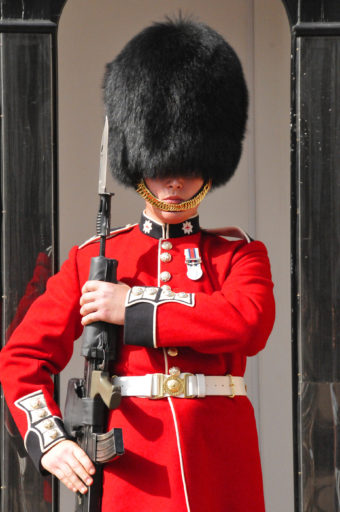 “The Queen’s Guard” comprise of various soldiers tasked with guarding the residences of the Queen and, by extension, the Queen herself. Consisting of soldiers (mostly) hand picked from five elite regiments within the British military, the Queen’s Guard are internationally renowned for their stoic dedication to duty. However, contrary to popular belief, these soldiers are permitted to move (and do so regularly, even when just on guard duty and not on parade) and in certain circumstances do react to hecklers or the like.

That said, while on duty outside one of the Queen’s residences, these sentries are trained to remain unflinching in the face of everything from extreme weather to screaming abuse a few inches from their faces. In fact, if they end up having to relieve themselves during their two hour shifts (generally two hours on, four hours off), they remain just as outwardly unflappable, instructed to simply perform their necessaries in their thick woolen trousers which, according to Guardsman Shaun Marsden, “are sufficiently dark to cover their embarrassment”. (While this might seem a short span of time to ever have this occur, it should be noted that on hot summer days, Guardsmen are instructed to drink very large amounts of water before going on duty to attempt to prevent heatstroke and dehydration.)

But despite these bastions of British stoicism’s reputations, they do move regularly- at least every 10 minutes they will turn and patrol their post, which usually involves taking about 10-20 paces one way and then back before once again resuming their vigil. Occasionally a guard may also perform such a march to approach an individual within their vicinity who is being a particular nuisance or the like, but the more common purpose of these little jaunts is usually just to get the blood flowing again to keep it from pooling too much in their legs, potentially causing the soldier to faint.

Speaking of fainting, if a soldier begins to feel themselves succumbing to such, they are taught to “faint to attention”. This basically means that they must faint while maintaining their standing at attention pose. In practice when achieved, this tends to result in them falling rigidly over like a toy soldier, which is why pictures of guardsman laying face down, rather than more or less crumpled, on the ground abound on the web.

Fellow Queen’s Guard members around said individual are forbidden from deviating from their duty if this occurs and will in fact march straight over their fallen comrade if necessary. (Medical personal will, of course, be sent out to attend to the individual when this is observed.)  While not a common occurrence, this does happen every now and then. For instance, during the 2017 Trooping the Colour, in which temperatures sat around 27°C (80°F), five of the Queen’s Guard, baking in their many layered, thick uniforms and bearskin hats, passed out.

Beyond fainting and marching, the guards also may move about in a variety of other ways- they are guards after all. However, given that their roll has largely been reduced to a symbolic one, with local law enforcement generally taking care of any problems that arise around the Queen’s residences, today one of these elite soldiers breaking their normal stoic stance is generally simply due to tourists, rather than a real threat or need for them to perform as actual guards.

That said, members of the Queen’s Guard will rarely openly react to tourists taking photos or telling them jokes to try and make them laugh and are, in fact, specifically instructed to ignore stuff like this. However, if a particular group of tourists is being especially annoying, the guard may make their best effort to ruin a picture or the like, for instance by suddenly turning and marching right when the tourists are all posing for a photograph with the guard. In one instance we came across, a guardsman noted he’d just continuing to march while such tourists are around, passive aggressively getting them back for their disrespect- somewhat akin to the Seinfeld Soup Nazi, “No picture for you!”

Speaking of marching, should you get in the way of a member of the Queen’s Guard who is doing this, you’ll likely find yourself having said soldier shout something to the effect of “Make way for the Queen’s Guard!” Failure to move out of their way will result in you being knocked over, as one hapless man found out in 2015. (Although to be fair to said man, no one in the Guard chose to yell “Make way!” until after they ran into him, and he clearly was oblivious to their presence before the collision, so wasn’t trying to disrespect them.)

One guardsman also noted that, while exceptionally rare, occasionally a tourist will tell a particularly good joke which may elicit a smile or even laughter from him, though if a soldier is caught in such a slip in composure, they get docked pay (a few days to a week’s worth depending on the severity of infraction) and may endure other punishments, including in extreme cases being kicked off the guard. Thus, while trying to get the guard to lose their composure may seem all fun and games to tourists, if one is successful and the guard’s superiors find out, that person may have just screwed with the livelihood of said soldier, who in the first place aren’t exactly getting rich as a member of the Guard. (They are generally paid somewhere between about £1200-£2000 per month, which is about $1,500-$2600.)

As for sanctioned interactions with people, should the guard deem someone enough of a nuisance (though not necessarily a real threat, with in that case guards free to react however they see fit to deal with the situation), they are instructed to do the following:

One potential almost surefire way of eliciting such a strong reaction is to touch the guard or otherwise exhibit extremely disrespectful behavior, such as marching along beside the soldier in a mocking fashion while insulting the guard verbally.

And if you’re wondering whether said rifles that may be pointed at your face in such a scenario are loaded are not, they are usually not. (Though one imagines having a sharpened bayonet wielded by a highly trained soldier shoved in your face is intimidating enough, even if you know the gun it’s attached to is not loaded.) Occasionally the Guard do carry ammunition with them though, particularly when there’s knowledge of a credible threat to the safety of the Queen or nation or otherwise when a heightened state of security is ordered.  In these cases, if necessary, the soldier can load the rifle in a blink by simply ejecting the empty magazine and popping in a full one.

And, yes, as actual guards- even if their duties today are mostly ceremonial in practice- said individuals are authorised to use deadly force when appropriate, most notably if they feel their own lives, members of the royal family, or the general public near their guard post are endangered.

As an idea of just what the Queen’s Guard have long had to deal with from people, former guardsman Ronald Tibbets notes, “Some march up and down with us and others pull our bearskins. Some people put fag ends down the rifle butts. Some stick oranges on the end of the bayonet…”

It’s also noted that having banana peels or other such items placed along a soldier’s marching route is occasionally a thing. People also sometimes attempt to untie the guard’s shoelaces. One member of the Guard even noted it wasn’t uncommon for people to “stick pins in you” to try to make guardsmen flinch.

It’s not all bad, though, and guardsmen have noted that some people are quite respectful when approaching for photographs and the like. Further, one guardsman noted in an interview there was a general “perk” of frequently having women flash guards to get a reaction and also sometimes having phone numbers and addresses slipped into their pockets by those women no doubt wanting to see whether the ability to stand at attention for hours at a time translates to the bedroom.

Today, many problems the Queen’s Guard have long had with the general public has been mitigated somewhat. To get around the fact that the public seemingly can’t be trusted to act respectfully around said soldiers, the guards in many, but not all, cases now stand behind fences or roped off areas. They still have to deal with the heckling, of course, but at least can now in many posts avoid being stuck with pins.