Sunny Southern California and the Birth of the Zamboni 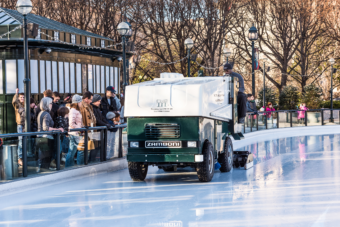 It was approximately four thousand years ago in Finland when people first strapped on skates to glide across the ice. This wasn’t for entertainment purposes, though. Finland is full of lakes and cutting across the ice saved time on daily journeys. By 1 AD, ice skating existed across Northern Europe. Metal skates were first created by the Dutch in 1250 and this led to the proliferation of leisure skating. Rinks were built across Europe, but the first commercial rink in North America was probably built in Montreal during the mid-19th century. The first one in the US was Madison Square Garden ice rink, constructed in 1879.

Of course, keeping the ice frozen, smooth and safe has always been something of a struggle. To get around this issue, brothers Joe and Lester Patrick designed a mechanism for indoor rinks that utilized brine water to refrigerate a concrete base, as thin coats of water was slowly poured over to create layers of ice. To resurface the ice when it melted and chipped, the remaining bits of the old ice had to be removed or smoothed and then this process was essentially repeated. But it took a long time and required a large crew to complete the several-times-a-day task. Quite simply, there had to be a better way.

It was the turn of the 20th century when Frank Zamboni was born to recent immigrant parents in a small town south of Salt Lake City, Utah. When Zamboni was a baby, his family bought a farm not too far way in Idaho. That’s where he got his first experiences in mechanical engineering. Frank Zamboni, his brothers and father spent long hours tinkering and fixing broken farm equipment. Frank also worked a local garage, repairing old pickup trucks.  “While my father never got past the ninth grade in formal schooling, he always had an inquisitive mind in solving problems,” Frank’s son Richard Zamboni later told Popular Mechanics, “Whether it was electrical, mechanical, or business-related, he had the unique ability to get to the heart of issues.”

When Frank was 19, the family moved to Clearwater, California – a town 15 miles south of Los Angeles and in the harbor district – because Frank’s older brother owned a successful garage there. Frank helped at the garage and took a second job as a blacksmith’s apprentice. Within a year, the family had saved enough money to send Frank to Chicago’s Coyne Trade School to study electrical engineering. When he returned in 1922, Frank and his brothers opened an electrical company that they would eventually name “Zamboni Bros. Co.” They specialized in installing refrigeration units for the local Dutch-owned dairies that dominated the small town of Clearwater and its neighbor Paramount.

Locally, Frank Zamboni became known as a mechanical and electrical wizard. In 1928, he registered for his first patent, a thing called “Adjustable Reactor Resistance“. In fact, over his lifetime Frank Zamboni would be awarded 15 patents, including one for the Astro Zamboni Machine, which was designed to suck up water from AstroTurf at a rate of about 400 gallons per minute.

In the late 1920s, the brothers used their refrigeration know-how to open an ice-making plant that kept local fruits and vegetables fresh and cold as they were being shipped across the country via train. However, already by then, freon was being successfully used in commercial refrigeration. By the 1930s, refrigerators became something anyone could have in their home. Within only a few years of the Zamboni Brothers starting their ice-making plant, it was obsolete.

So, in January 1940 and using their ice-making skills, they opened a 20,000 square foot ice skating rink across the street from their former business. It was called Iceland and it was one of the largest ice rinks in the country.

So, why would the Zamboni brothers build a humongous ice skating rink in a Southern California town that was miles away from Los Angeles? Because of the local Dutch population, for whom skating had become a part of everyday life starting in the 13th century (in particular, speed skating). The rink was an immediate hit, attracting 150,000 people a year. But they had problems – mostly due to the omnipresent Southern California sun.

Although the brothers quickly added a roof and Frank had installed a new and improved version of what the Patrick brothers did in Canada, the ice did not stay frozen for long and often melted. Thus, it required constant attention from a large crew that needed more than an hour to manually resurface the ice. The process was inefficient and time-consuming. So, Frank Zamboni – the most skilled engineer of a family full of them – got to work.

It took more than seven years, parts pulled from all over and several failed models, but by 1949, Zamboni had a working prototype for an “ice resurfacer.” He started with two Dodge truck front ends, which he used for both the front and back. He put in a transmission, a front steering axle that provided four wheel drive and a Jeep engine – all from war surplus junkyards. Zamboni then tacked on a tractor seat, a chalice from an oil derrick and the landing gear of a Douglas A-26 bomber. Finally, he added elements to the souped-up ice-traveling tractor that shaved and resurfaced the ice – razor blades, a paddle and chain system, a wood box to catch the savings, another tank with hot water and a towel to spread the water on the ice.

In the summer of 1949, with the ever present California sun glowing hot, he debuted his “Model A Zamboni Ice Resurfacer.” It was top-heavy, bizarrely complicated to control, and loud. But it worked, requiring only one operator and about ten minutes to create a smooth new sheet of ice. (This first unit was used at Iceland for several years and is now on display at the still-existing ice rink as a piece of American history.)

Soon after, Zamboni patented his ice resurfacer, formed a partnership with his brothers that he called “Frank J. Zamboni & Co” and went to work on Model B. Tinkering and improving the machine, he made his first sale – to nearby Pasadena Winter Gardens- for $5,000. The next one (and third one) he built for Norwegian Olympian (and movie star) Sonja Henie, who had seen the Zamboni in action while she practiced for her “Hollywood on Ice” show at Iceland. (On that note, it’s unclear when the name of the machine shifted from “ice resurfacer” to the name of the inventor, but legend has it that Henie was the one who asked Frank to give her one of those “Zambonis.”)

Whatever the case, the fourth Zamboni was sold to the Ice Capades. That one is now on display at the Hockey Hall of Fame. The Zamboni made its NHL debut in 1952 during a Boston Bruins game, forever cementing the relationship between the machine and the sport.

Over six decades later, the Zamboni is a cultural icon, inspiring fandom beyond anyone’s wildest imagination. After all, it was merely built to make a cold, wet job easier. “I don’t understand it,” the baffled inventor told the Los Angeles Times in 1988, “I was just trying to find a better way of doing something.”