Why Can’t People Smell Themselves?

May 8, 2017 Scott
Shannon D. asks: How come people who smell really bad can never seem to smell their own stench? 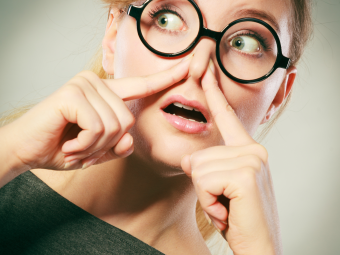 Have you ever sat next to a woman on a bus who lost her sense of smell? Or, at least, you assume so as the eye-watering fragrance wafting from her perfume is so overpowering that the nausea it induces makes you appreciate the subtle scent of a dryer sheet… If so, you might wonder, what causes a person to become blind to their own smell?

Technically referred to as olfactory fatigue, olfactory habituation, or odor adaptation, being “nose-blind” might appear to be something of a defect, but the ability to have the scent of a specific fragrance (such as your own) dwindle over time is very beneficial. Imagine tip-toeing through the tulips, enjoying the lovely aroma around you along with your own equally lovely stench. If these smells didn’t diminish over time, you might miss the new smell of a cougar about to use you as a tasty meal. Or, perhaps you’re the hunter and are trying to pick up the scent of your prey. In these sorts of scenarios that our sweaty, hunter-gatherer ancestors with deodorantless armpits frequently found themselves in, scanning for new smells was much more useful than continuing to experience their own. The drawback is, of course, in more modern times perfume-Peggy doesn’t realize the overpowering nature of her cougar-scent…

But how does this work?

To begin with, in the back of your nasal cavity, about 2 ¾ inches or 7 centimeters above and behind your nostrils, lies a special grouping of cells called olfactory epithelium. These cells are attached to the olfactory bulb within the brain by olfactory neurons. At the end of each neuron lies a receptor cell. When microscopic molecules circulating within the air or molecules broken down in the act of chewing your food come into contact with a receptor cell, they attach. The process is called protein-ligand binding. Once attached, it will cause an electrical signal to be transmitted down the neuron to your brain. The signal your brain receives gives us the perception of smell.

There are around 350 genes (from the nearly 1,000 olfactory genes) that make olfactory receptors. Each gene produces a different type of receptor. Each specific receptor will react to a specific group of structurally similar molecules- molecules from coffee, tomatoes, or Peggy’s generously applied perfume, for example. A combination of several different receptors being activated will also be perceived as a different type of smell. In this way, your body can distinguish countless number of different odors.

(And note: it was once thought that humans were only able to recognize around 10,000 different fragrances. Dr. Leslie Vosshall and her colleagues at Rockefeller University, however, have recently shown humans are actually able to detect at least 1 trillion different smells, and this number might be too low by a long shot. Dr. Vosshall’s study only used 128 different types of odor molecules to achieve the nearly 1 trillion different sensations of smell. She points out that there are many more odor compounds found in nature than just the 128 she used.)

In any event, now that we know how our brains perceive smell, we can better understand olfactory fatigue. When an odor molecule attaches to a specific protein on a receptor cell (guanine nucleotide protein-coupled receptors), it causes a rush of sodium and calcium into the cell. This will create an electrical differential across the cell membrane that creates the impulse your brain perceives (depolarization). This rush of sodium and calcium (ions) goes through pathways known as CNG channels (cyclic nucleotide-gated ion channels).

The rapid influx of calcium will begin a cascade of chemistry that causes CNG channels to close. Once closed, similar odor molecules will be unable to activate the receptor and it will no longer send the electrical signal for the brain to perceive as smell. Specifically, the CNG channels associated with olfactory adaptation are CNGA4 and CNGB1b.

And for those who like the ultra-technical description, Dr.’s Jonathan Bradley, Dirk Reuter and Stephan Frings in their 2001 report published in the journal Science, explain:

We find that only in the presence of CNGA4 and CNGB1b, the two modulatory CNG subunits of the olfactory CNG channel, can Ca2+-CaM bind rapidly to the open state…… In ORNs, where CNG channels reach high levels ofP o, the CNGA4 subunit facilitates Ca2+-CaM binding to open channels and, hence, transforms the negative feedback by Ca2+-CaM into the rapid and state-independent control mechanism that is needed for olfactory adaptation…

So, in more layman’s terms, olfactory fatigue occurs such that when you sense a specific odor, the receptors associated with that molecule can no longer be stimulated by similar molecules because the channels that create the electrical impulse will ultimately close. The result leaves only receptors that get stimulated by other molecules (different types of odors)- thus, your propensity to sense new smells more strongly, and the ones you get consistently bombarded with eventually no longer being detected at all. Congratulations, you’re now nose-blind.

This brings up the question of how one can rapidly reverse the effect of nose-blindness? Well, this is easier said than done reliably.

You might have seen that perfume shops often have bowls of coffee beans that they say will help reset your nose- a nasal-palate-cleanser so to speak. The theory behind this seems legitimate. If attached odor molecules cause nose-blindness, simply knock off those molecules and you should be good as new. There are around 28 different types of molecules associated with coffee odors. If one or more of these odorants are stronger than the ones causing the nose to be blind, then maybe they will help reset the neurons.

Unfortunately for perfume shop coffee bean suppliers, studies on the effectiveness of coffee on odor adaptation have shown that coffee is no better at reducing the effects of olfactory fatigue than simply taking in a deep breath of fresh air.

Another theory on reversing olfactory fatigue revolves around returning your olfactory receptors to their baseline, namely, the smell of your own skin. You achieve this by inhaling unscented portions of your skin. Once the system is more or less “reset,” this should allow for the new smell to be better perceived.

While this oft’ suggested method seems reasonable enough, unfortunately, there doesn’t seem to be any studies looking at how well this works, or if it actually works at all. You will, however, find countless anecdotal accounts advocating for its effectiveness.

In the end, being nose-blind can be both helpful, as in the case of filtering out your own garlic breath (see: Why Does Garlic Make Your Breath Smell Bad?) so you don’t have to smell it, or annoying, as in the case of other people having to smell your garlic breath because you aren’t aware of it… or on a similar note, perfume-Peggy and her incessant need to bath in Chanel #5 because she’s become immune to the scent. And if you want to reverse the effect to actually be able to smell a noxious odor about yourself (so-as not to become perfume-Peggy or garlic-Greg), unfortunately, it appears at least for now that there isn’t any scientific silver bullet method to reliably achieve this.

This once again leaves us with the age-old method of just asking someone nearby, “Do I smell bad?” and hope they ignore normal social graces and answer honestly.  Perhaps in future our robotic personal assistants will have the necessary sensors built in to be able to help us out there without concern for committing a social faux pas.