Why Coffee Makes You Poop

March 13, 2017 Scott
Mark C. asks: Why does drinking coffee almost always make me have to poop? 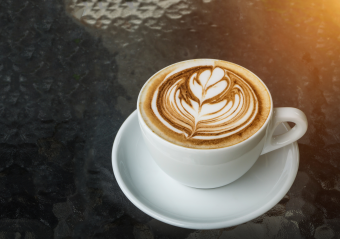 As any barista beginning their 5am shift will tell you, a morning cup of coffee is essential for a chipper attitude and a healthy psyche! The dilemma some have is that right after you indulge- it hits you. The #2 train is about to arrive and you don’t want to be stuck in traffic when it does!

In fact, coffee’s effect on the colon is on par with eating around a 1000 calorie meal. It’s also interesting to note that the reaction is not volume or temperature dependent. Women are more susceptible to these effects than men (53% for women and 19% for men). And of those affected, 58% reported the reaction would only occur if they had not already evacuated their bowels, and 52% state the reaction only occurs in the morning.  So what’s going on here?

A commonly touted theory is that the caffeine inside of coffee is the culprit. After all, caffeine’s effects on your gastrointestinal tract have been known for quite some time. More specifically, one theory about the exact mechanisms that may be causing this concerns how caffeine stimulates your central nervous system- stimulating your sympathetic nervous system (your fight or flight nervous system) with the net result being the constriction of your blood vessels.

Normally responsive to low oxygen levels, a grouping of cells called chemoreceptors can get stimulated by this constriction. Indirectly, this will have a response affecting your Vagus nerve. The Vagus nerve can stimulate part of your parasympathetic nervous system (your rest-and-digest nervous system) which increases the rhythmic contractions within the colon. Thus, taking in caffeine may result in an increase in your gastric motility, known as peristalsis. (In layman’s terms, essentially a wavelike contracting and relaxing of the muscles forcing the contents of your digestive system to move their way through towards your backside.)

However, the “caffeine causes you to poop after drinking coffee” idea has since been debunked for several reasons. To begin with, caffeine will usually begin its stirring effects about 15 minutes after ingestion. Those effects will continue for several hours, with its half-life at around 5-6 hours on average. Why is this important here? One study specifically looked at the colon’s response to coffee by placing an anal probe (FOR SCIENCE!!!) in the large intestines of those who had an increase in peristalsis from it. Coffee’s crappy affects were shown to begin within 4 minutes after ingestion, and the increase in peristalsis remained for only approximately 30 minutes. These time-frames do not support caffeine being this particular promoter-of-poop.

The caffeine-cause was further debunked when it was shown that increased peristalsis did not happen with other caffeinated beverages, but would happen with decaffeinated coffee.

So if it’s not the caffeine, what in the coffee is causing the urge to defecate in some people?

While it hasn’t been definitively proven yet, the leading theory behind coffee’s boost in productivity of your waste management system is a combination of several hormonal and neural mechanisms, some known and likely some as yet unknown. The known include a rise in acid production within your stomach and the release of the two hormones, Gastrin and Cholecystokinin, which have something of a laxative effect.

To begin with, coffee is relatively acidic, specifically having a pH between 4.5 and 6. (And for reference in case you’ve forgotten your high school chemistry, 7 is neutral.) In fact, there have been over 40 types of acids found in roasted coffee. These can be broken down into three groups: aliphatic, alicyclic carboxylic and phenolic, and chlorogenic.

Importantly, chlorogenic acid will also promote increased acid production by your stomach, elevating the acidic environment. In healthy people, this acid-bath will aid in the digestion of proteins and fats. The stomach responds to the acid production by moving its contents more quickly into your small intestine. Increased acid levels will also trigger the release of gastrin and cholecystokinin, which provokes the aforementioned peristalsis.

Gastrin is produced when the body senses the presence of food in the stomach, or your Vagus nerve gets stimulated by one of your senses, like taste or smell, in response to food. Its release causes several reactions within the body. The gastroesophageal sphincter will constrict, keeping the food in your stomach, not allowing it back up into your esophagus. It increases the motility of your digestive tract and gall bladder, in preparation for foods arrival into the small intestine. Simultaneously, it will relax the valve between your small intestine and colon, called your ileocecal valve. This will allow the food already in your small intestine to move-on to the large intestine. Finally, it increases peristalsis throughout the entire digestive system. The overall result of gastrin is essentially- out with the old, in with the new!

Cholecystokinin, while similar in structure to gastrin, functions differently, causing other reactions. It’s also released in response to food being introduced to the stomach. It stimulates your gall bladder to release bile into the intestines, which helps digest fats. This could be why people who have painful gallstones often choose to avoid coffee. It also stimulates pancreatic juices, helping to break down large food particles into molecules that can be absorbed by the body. Cholecystokinin has also been shown to stimulate your hypothalamus, signaling the body that it’s had enough food. It’s thought this is one of the mechanisms giving coffee its appetite suppression effect.

All this said, just because these are probably the main influences on your coffee induced BM, it is still thought that there are probably other things going on as well. This is because there are over a thousand chemical compounds found within coffee, and many can affect the gastrointestinal system. The digestive tract is also extremely complex and still not fully understood.

For instance, the morphine-like compounds found in coffee called exorphins attach to opiate receptors located throughout your body. There are four known types of these- delta, kappa, mu, and the very boringly-named, Opiod-receptor-like-1 (ORL1). All of these receptors are known to affect peristalsis in some way. However, it should be noted that most tend to have the opposite effect as coffee- they usually cause constipation.

So why is this being considered as a contributor? The debate arises because there are so many different reactions that can take place, depending on which specific type of opioid receptor gets stimulated. It also matters at what point in the signaling process of neurons you stimulate the receptor. As one researcher put it, “The GI motor effects of opioids are complex because, depending on whether interruption of excitatory or inhibitory neural pathways prevails, muscle relaxation or spasm will be observed.”

When you combine the complex nature of opioids with the fact there haven’t been many studies specifically identifying the regulatory properties of ORL1, you begin to understand the obstacles facing researchers. For instance, it’s known that ORL1 reacts more quickly than the other opioid receptors, seeing results after only 2 minutes of exposure to an agonist. This makes it a tempting receptor to look at given the time-frames associated with your distal colon’s reaction to coffee.

In the end (pun intended), given the extremely complex nature of the human digestive system and the multitude of compounds found in coffee, it will take a significant amount of additional research to nail down all the contributing factors in coffee making some people defecate. But as I finish my morning cup of Joe, I would like to thank all those brave individuals to date who have voluntarily had an anal probe inserted FOR SCIENCE!!! to give us an idea of some of the mechanisms involved here, as well as safely rule out others we previously hypothesized might be contributors.