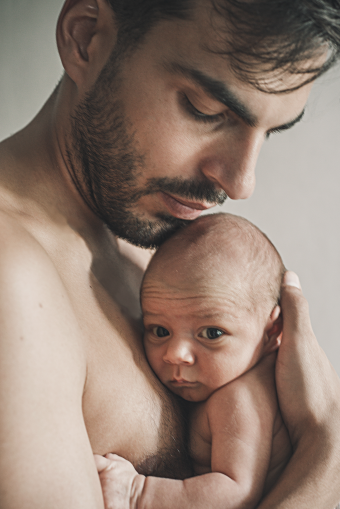 The ability to lactate exists in a variety of male animals, though male milk production is typically a rare occurrence. However, male Dayak fruit bats are commonly known to lactate. So what about human male lactation? Believe it or not, men can, in fact, lactate. Possessing all the necessary equipment (see: Why Do Men Have Nipples), the main reasons men don’t have it happen very often is mostly just a lack of sufficient amounts of a single necessary hormone.

Milk is produced in small hollow cavities in breast tissue called alveoli, where the linings contain cells that secrete milk when properly triggered. While there are a variety of things that go into someone lactating, including various hormones, the main trigger for milk production is sufficient amounts of the hormone prolactin, which is primarily produced by the pituitary gland, though also by the prostate in men and a layer of the uterine wall known as the myometrium in women, among other places.

Both men and women have alveoli, but typically have markedly different levels of prolactin. In fact, a normal non-pregnant woman has around one third to twice the hormone than the average man at any given time. Late in a pregnancy and after giving birth, prolactin levels can peak as high as ten times more in these women compared to what you’ll typically find in males.

So how can men lactate without the necessary processes involved in child birth triggering a ramp up of prolactin production?

Prolactin is ultimately metabolized by the liver helping to regulate its concentration in the body in conjunction with certain mechanisms in the hypothalamus. When the liver isn’t functioning properly, abnormally high levels of certain hormones may build up. This is what is thought to have happened to hundreds of male POWs during WWII, who, after suffering months of starvation, began lactating during their recovery; experts opine that the stress and deprivation interfered with the liver and certain hormone producing glands’ normal activities. Once properly fed, the liver took longer to recover than the hormone producing glands- pertinent to the topic at hand resulting in a build-up of concentration of prolactin in the POWs’ bodies, causing them to start lactating.

More recently a report in the Canadian Medical Association Journal documented a case of a man who had a pituitary tumor that resulted in, among other things, overproduction of prolactin, causing him to lactate.

In fact, there are numerous reports throughout history of men lactating, including in The Talmud, where a poor man whose wife died while their baby was quite young had “a miracle . . . his breasts opened and he nursed his child.”

In Numbers 11:12 in the Bible, (whether claiming it was a known literal occurrence or not isn’t clear) it notes, “Have I conceived all this people? Have I begotten them, that thou shouldest say unto me, Carry them in thy bosom, as a nursing father beareth the sucking child, unto the land which thou swarest unto their fathers?”

In Anomalies and Curiosities of Medicine (1896), Gould & Pyle report that both a male South American native and male Brazilian missionaries nursed children after their wives lost the ability. And a similar much more modern and well documented report was made in 2002 of a Sri Lankan man, Mr. B Wijeratne, who took up breastfeeding his 18 month old daughter after his wife died giving birth to their second child. He initially had attempted to feed the older child formula upon her mother’s death, but this was summarily rejected by the toddler. He later stated, “unable to see her cry, I offered my breast. That’s when I discovered that I could breastfeed her.”

If you’re wondering how this is possible, it’s known that expectant fathers and those with newborns also see a spike in prolactin compared to their normal levels.

While not anywhere close to enough to cause lactation in men normally, you may be aware that nipple suckling can result in women who didn’t just have a baby ultimately lactating anyway. What’s less well-known is that the receptors responsible for triggering the brain to in turn stimulate the pituitary gland to produce more prolactin and trigger the release of oxytocin, which is necessary to get the milk flowing, exist and function in both men and women.

This process can commonly be observed in cases of women adopting babies and wanting to breastfeed them. They are able to achieve this via regularly having the child suckle and further using a breast pump every few hours over the course of several weeks. According to the Goldfarb Breastfeeding Clinic, in a small study they conducted looking at 228 women attempting this, 31% were able to produce enough milk to provide the full caloric and nutritional needs of the baby. While that may seem a small percentage, it should be noted that nearly all 228 women were at least able to provide some milk to their adopted babies.

This same thing can also be observed in various animals, including sometimes used to cause goats who have never had kids to produce milk. (Editor’s note: I personally had a dog once who never had puppies herself in her near 20 years of life, but for several years in her youth new litters of kittens produced by various barn cats would inevitably see her breasts engorge as she took over breastfeeding the many kittens. She’d even eventually become extremely protective of them, ultimately not letting the actual mother cats go near them anymore. Sort of bizarre, but the kittens never seemed worse for wear and grew up to be seemingly healthy cats.)

In any event, for men, as with women, the net result of having a baby around and regularly using a breast pump / letting said baby suckle results in a prolactin spike. For some men, this may be high enough to trigger milk production, allowing the male to breastfeed a baby. (Whether that’s what happened in the case of the Sri Lankan man or if he had some other condition isn’t clear, with his physician, Dr. Kamal Jayasinghe, simply noting to the media, “Men with hyperactive prolactin hormone can produce breast milk.”)

It should also be noted here that some teenage and adult men produce milk without babies or drugs. Called male galactorrhea, it often develops during the hormone surge of puberty, but can also be caused by hypothyroidism, among other conditions. Videos documenting such lactation, such as Bodybuilder Chest Milk, abound on the web.

In addition, approximately 5% of newborn babies of both sexes secrete milk from their breasts. Colloquially called Witch’s milk, it is believed to be caused by the combined effects of prolactin and growth hormones from the mother’s milk, along with thyroid and pituitary hormones from the baby. The milk produced is similar in composition to a typical woman’s milk. The condition usually subsides within a couple of months.

Finally, as I’m sure there are some men out there interested despite the social stigma (and potentially some women who’d kill for their men to be able to help out on the breastfeeding front), outside of the aforementioned nipple suckling technique boosting prolactin levels, a more effective solution for men would be to simply introduce more prolactin into the body directly. However, while this is sometimes done to induce lactation in animals, at least as far as I can find, it doesn’t appear to be a treatment available to human males wanting to breastfeed their children, and potential side effects of sustained extremely high levels of prolactin in males doesn’t appear to be something well studied. However, it is known that abnormally high prolactin levels can cause a loss of libido in men and women, and in men potential problems with impotence while said levels remain high. Further, prolactin is involved in at least 300 known processes in the body, including playing a role in one’s metabolism and immune system, and in men potentially lowering testosterone levels.

It should also be noted that the general consensus is that, due to certain physiological processes during puberty, even with sufficient prolactin it is unlikely a breastfeeding father would produce nearly as much milk as a woman with equivalent levels. That said, while that seems to be the general consensus of the medical community, I couldn’t actually find any study looking at volume of milk production in lactating males that have been studied.

And if you’re wondering about the nutritional value of human male breast milk compared to female breast milk, in a 1981 study of a lactating human male, it was determined that, much like the milk found in both male and female lactating babies, “The concentrations of lactose, proteins, and electrolytes in the breast secretion of this man are within the range of colostrum and milk obtained from normal lactating women.”