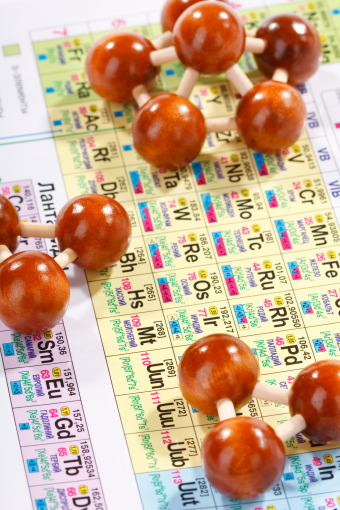 If the Transfermium Wars raged from the late 1960s to the late 1990s, how is it that so few people have ever heard of them? Because they were fought by rival groups of scientists over who would get to name newly discovered chemical elements.

When someone discovers a new chemical element, it’s the tradition in the scientific community that the founder gets to name it. The system works pretty well, except for when more than one scientist or group of scientists claims to be the discoverer.

Take the elements that were initially known as numbers: 104, 105, and 106. On the periodic table, elements are organized according to their atomic number—the number of protons, or positively charged subatomic particles, in the nucleus of each atom. All three of these elements were synthetic, which means they don’t exist in nature but can be produced or synthesized in laboratories. All three are radioactive, and their discoveries were the product of secret atomic research during the Cold War between the Soviet bloc countries and the United States and its allies. A group of Soviet scientists at the Joint Institute for Nuclear Research in the town of Dubna, near Moscow, claimed to have discovered all three in the late 1960s and early 1970s. But so did scientists at the University of California, Berkeley.

Then there’s the elements 107 and 108. The Russian scientists at Dubna claimed to have discovered those two elements as well, but so did German scientists at the Society for Heavy Ion Research in Darmstadt, West Germany.

Because all five elements follow fermium (Fm)—which has the atomic number 100—on the periodic table, the dispute came to be known as the “Transfermium Wars.” Neither side was willing to concede victory, and the dispute over what to name the elements continued for more than 30 years.

Who’s Your Daddy? The Russians claimed to have discovered it in 1964, but scientists at U.C. Berkeley believed they were first when they made their discovery independently in 1969. One of the problems with verifying the claims is that even the most stable form, or isotope, of element 104 has a half-life of only 1.3 hours, which means that half of the material decays in less than 80 minutes. And 1.3 hours after that, half of the remaining half will decay, and so on, until there’s not much physical evidence left to prove the claim that you’ve actually succeeded in making the stuff. The suspicion and mistrust of the Cold War era made it that much harder for one side to believe the claims the other side was making—especially when the other side claimed to be first.

The Russians named the element kurchatovium in honor of Igor Kurchatov, the father of the Soviet atomic bomb. The Berkeley scientists gave it the name rutherfordium to honor Ernest Rutherford, the New Zealand–born, Nobel Prize–winning British physicist who is considered the father of nuclear science.

Who’s Your Daddy? If you think element 104’s half-life of 1.3 hours was a challenge, the first form of element 105 that was discovered had a half-life of just 1.6 seconds. The Soviet scientists claimed they synthesized the element as early as 1968, and the scientists at Berkeley claimed they did it in 1970. The Soviet scientists called the element nielsbohrium (Ns) in honor of Danish physicist Niels Bohr; the Berkeley scientists called it hahnium (Ha) in honor of German chemist Otto Hahn.

Who’s Your Daddy? In this case, the claims of discovery were only a few months apart. The Soviets claimed to have synthesized element 106 in June 1974; the scientists at U.C. Berkeley said they created their first samples in September of the same year. The isotope claimed by the Soviets had a half-life of a little over half a second, and the isotope claimed by the U.C. Berkeley scientists had a half-life of 0.9 seconds.

It’s not clear that the Soviets ever picked a name for element 106, but the Berkeley scientists did: seaborgium, in honor of their colleague Glenn T. Seaborg. He and an associate named Edwin McMillan won the Nobel Prize in 1951 for discovering five different elements: plutonium (Pu), americium (Am), curium (Cm), berkelium (Bk), and californium (Cf). Seaborg also helped in the discovery of two more elements, einsteinium (Es) and mendelevium (Md).

As the co-discoverer of so many elements, Seaborg was certainly worthy of the honor, but the choice was controversial because Seaborg was still alive. Traditionally, elements are named for dead scientists. The only exceptions were einsteinium (Es) and fermium (Fm), both of which were discovered in the debris of a hydrogen bomb testing at the North Pacific atoll of Enewetak in 1952. The names for these elements were proposed while Einstein and Fermi were still alive, but the existence of the new elements, and thus their names, remained a military secret until they were declassified in June 1955. By the time the names were made public, both Einstein and Fermi were dead.

Who’s Your Daddy? The Soviet scientists said they produced the first samples of the element in 1976, but scientists at the Society for Heavy Ion Research in Darmstadt made their own claim of discovery after synthesizing element 107 in 1981. In this case the Soviet claim was sketchy but the German claim was not. Scientists there were able to prove they’d created five atoms of an isotope of element 107 that had a half-life of just 84 milliseconds—less than a tenth of a second. The Russians proposed no name for the new element, but the Germans proposed naming it nielsbohrium if the Russians lost out on their bid to give that name to element 105 in honor of Niels Bohr.

Who’s Your Daddy? Both the Soviets and the Germans claimed to have synthesized the element in 1984. It’s not known whether the Russians actually proposed a name for the element. The Germans wanted to call it hassium in honor of the German state of Hesse, where Darmstadt is located.

By the early 1990s, the names of all of these elements had yet to be sanctioned by the International Union of Pure and Applied Chemistry (IUPAC), a body of scientists that has the final say in picking the names that will be adopted by the scientific community worldwide. When the discoverer of an element is not in question, their role is typically to approve whatever name has been suggested by the discoverer. But when there’s no agreement on who the discoverer is, it’s hard for the IUPAC to reach consensus on which name to approve.

In the meantime, the IUPAC had a system of temporary “placeholder” names for the elements that was based on Greek and Latin words for the atomic numbers of each element in dispute. Element 104, for example, was given the placeholder name unnilquadium—“one-zero-four-ium.” This pleased nobody. In such cases, scientists in the Soviet bloc used their preferred name in scientific papers and textbooks, and the Americans used theirs. Disinterested scientists everywhere simply referred to the elements by their atomic numbers: element 104, element 105, and so on, and got on with their work.

In 1986, the IUPAC joined with another group called the International Union of Pure and Applied Physics (IUPAP) to form a committee that would consider the competing claims for discovery of the elements in dispute and settle on names for the elements that all parties could agree on. It took them eleven years to hammer out a compromise, but by 1997 they finally got it done. In the end the discovery claims of the United States, Russia, and Germany were all found to have merit to one degree or another, so the sides agreed to divvy up the naming rights.