Why Do Presidents Get to Pardon People at the End of Their Terms?

November 29, 2016 Melissa
Barbara W. asks: When did commuting a prisoners sentence at the end of a presidents Term of office go into effect, and why do they do it? 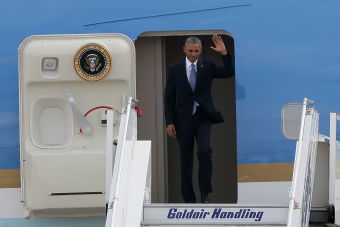 An armed insurrectionist, teamster with (perhaps) ties to the mafia, socialite turned terrorist, presidential sibling and even a former President of the United States have all received either a presidential pardon or commutation of their sentence. A tradition far older than any modern republic, with various emperors and monarchs having similar power seemingly as long as there have been emperors and monarchs, the power of the United States President to grant clemency traces its more direct lineage to a time when the Anglo-Saxons ruled England.

Originally residing with the king, the first written record of such pardoning power among these Anglo-Saxon rulers is found in Section 6 of the king’s statutes, during the reign of King Ine (668-725 AD), where it identified that the king had the power to either kill, or not, anyone who got into a fight in his castle.[i]

By the time of the Norman Conquest (1066AD), the king’s pardoning power, codified in the Codes of William the Conqueror (1066-1087 AD), had expanded to include thievery as well as sedition. William’s son, Henry I (1100-1135 AD) broadened the power even further in Leges Henrici Primi to include breach of the peace, killing of servants, contempt of writs and outlawry.[ii]

This power continued to expand and remained with the monarch, or executive, in England even through the establishment of the British colonies in America and then the Revolution. And, as the Founders turned to British law in crafting the Constitution, they included the power to pardon in Article II Section 2, to wit:

The President . . . shall have the power to grant reprieves and pardons for offenses against the United States, except in cases of impeachment.

As with the rest of the Constitution, when it came time to interpreting its sparse language on the power to reprieve, the country turned to the judiciary and the Supreme Court. Early on, in United States v. Wilson, 32 U.S. (7 Pet.) 150, 159-60 (1833), Chief Justice Marshall held that the presidential pardoning power was nearly as broad as that of the English monarchs:

The Constitution gives to the President . .. the power to grant reprieves and pardons. As this power has been exercised, from time immemorial, by the executive of that nation whose language is our language, and to whose judicial institutions ours bear a close resemblance; we adopt their principles respecting the operation and effect of a pardon. . . .

And while many jurists have found this interpretation appropriate, others were disturbed by the idea of bestowing upon an American President the broad powers of an English king. As Justice McClean wrote in dissent in Ex parte Wells, 59 U.S. (18 Hos.) 307, 311 (1855), he had doubts that it was “safe for a republican chief magistrate . . . to be influenced by the . . power of the British sovereign.”

Likewise, Chief Justice Taney, in Fleming v. Page, 50 U.S. 603, 618 (1850), while acknowledging the United States’ heavy dependence on English jurisprudence generally, questioned the prudence of relying on it when determining “the distribution of political power between the great departments of government, there is such a wide difference between . . . the President . . . and the English crown.”

In any event, the power has always been, and remains today, a broad one, and Constitutional scholars have identified at least three purposes for it: (1) “to temper justice with mercy,” (2) to better execute public policy, such as “to obtain testimony of accomplices;” and (3) as Alexander Hamilton put it in The Federalist No. 74, to ensure peace “in seasons of insurrection or rebellion.”

And, accordingly, over the years, presidents have continuously used the pardon, usually for one of these purposes. For example, both George Washington (16 clemencies) and John Adams (21 clemencies) pardoned people convicted of treason or other crimes during the Whiskey Rebellion.

Thomas Jefferson (119) pardoned a person convicted of sedition for his criticism of the federal government, and James Madison (196) pardoned the Governor of Michigan Territory, who had been sentenced to death for surrendering Fort Detroit.

Other notable clemency include President Buchanan (150) pardoning Brigham Young and other Mormons in 1858 for their role in the Utah War (which, among other things, included a massacre of 100 civilians on a wagon train to California).

Likewise, the 20th century also saw a number high profile clemencies. In 1971 President Nixon (926) commuted Jimmy Hoffa’s sentences for jury tampering and mail fraud. Then shortly after, in 1974, President Ford (409) controversially turned around and pardoned former President Richard Nixon, even though he had yet to be officially charged with a crime.

Patty Hearst, the kidnapped socialite turned Symbionese Liberation Army terrorist had her sentence commuted by President Carter (566) in 1979 and received a full pardon from President Clinton (459) in 2001.

As you can imagine, not everyone is pleased with every clemency, and often the president’s motives for granting a pardon or commuting a sentence are called into question; for example, when Nixon commuted Hoffa’s sentence, many thought it was done in exchange for the union vote in 1972.

Other infamous clemencies include two pardons granted by President Clinton: to his friend Marc Rich (for tax evasion and illegal trading) and his own brother Roger Clinton, Jr. (for cocaine possession). Similarly, President G.W. Bush’s (200) commutation of the sentence of his Vice-President’s aide, Scooter Libby, for perjury and lying to the FBI relating to the leak of the identity of a CIA operative, was strongly condemned by members of the opposite political party.

Regardless, clemency marches on, and by the end of 2016, President Obama (1,023) has commuted the sentences of more than 1,000 individuals, the majority of which remained in jail or prison for nonviolent drug crimes, often with sentences far harsher than someone would get for committing the same crime today. Or, in some cases, individuals who by the law of the land in 2016 wouldn’t have been considered to have committed a crime at all. (See a video here in which Obama explains his reasoning for being so much more aggressive than other presidents at commuting the sentences of certain individuals.)