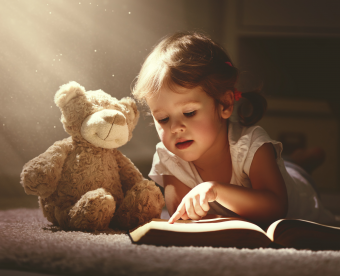 When the United Mine Workers of America went on strike in the spring of 1902, neither the miners nor the mine owners were quick to settle their disagreements. Fearing a shortage of coal for the approaching winter months- a major problem as coal was one of the primary ways people heated their homes at the time (which eventually led to the development of Play-Doh, not originally as a toy, but as wallpaper cleaner)- President Theodore Roosevelt decided to intervene. Finally, in October, the union workers and mine owners agreed on a deal.

With the crisis averted, Roosevelt decided it was time for a vacation and accepted an invitation from Mississippi Governor Andrew H. Longino to accompany him on a hunting trip that November. With trappers, horses, camping supplies, 50 hunting dogs, and journalists, away they went!

Hunting bears in the swamplands was considered highly dangerous, so Governor Longino chose Holt Collier for their guide. Collier, a former slave and cavalryman for Confederate General Nathan Bedford Forrest during the Civil War, knew the land well and had killed a reported 3,000 bears in his lifetime. As Collier later said, “[Roosevelt] was safer with me than with all the policemen in Washington.”

The ten-day hunting trip provided plenty of time for Roosevelt to track and kill a bear, but the president was impatient, desperate to see a live bear the first day. He didn’t. As the hunt continued, just about everyone in the hunting party had seen a bear except for Roosevelt. Not wanting to disappoint the president, Collier increased his tracking efforts and his dogs finally picked up the scent of and tracked down what turned out to be about a 235 pound black bear.

Before Roosevelt arrived on the scene, the dogs and bear got physical resulting in the death of one dog, with several others being wounded. At the same time, the bear’s own injuries progressively mounted, which was a bit of a problem. Collier, desperate to keep the bear alive so the president could claim his prize, decided to take matters into his own hands. With the butt of his rifle, he hit the wounded bear in the head, and then proceeded to tie the animal to a tree so it wouldn’t escape.

When Roosevelt arrived, he found a bloody, disoriented bear tied to a tree; dead and wounded dogs; and cheers from his hunting partners encouraging the president to claim his prize by taking the kill shot. Collier even offered to untie the bear so the kill would seem more authentic, but Roosevelt was disgusted, wanted nothing to do with the situation. Part of his love of hunting stemmed from skillful tracking of powerful, and very dangerous, prey through equally dangerous wilderness. In short, he wanted to earn any kills he got and to find his intended target able to defend itself with vigor. A half dead bear tied up to a tree simply wasn’t what he signed up for.

Refusing to raise his weapon, Roosevelt claimed the act of shooting the poor bear would be unsportsmanlike. However, as the animal seemed mortally injured, rather than let it go, he ordered the guide to put the creature out of its misery, something many descriptions of the event often leave out, generally implying the bear was set free and went on its merry way. 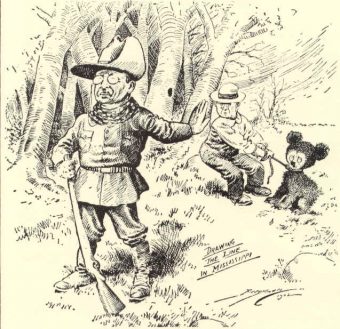 Nevertheless, the story of how the presidential big game hunter refused to shoot a helpless bear surprised many and made headlines throughout the country. Famed Pulitzer Prize winning cartoonist Clifford K. Berryman even depicted the incident by drawing it in a political cartoon which was originally published by the Washington Post on November 17, 1902. (Pictured right)

Beyond depicting Roosevelt refusing to harm the animal, the words, Drawing the Line in Mississippi, are sprawled in the cartoon. This is believed to have a double meaning, representing Roosevelt’s views on hunting and his loathing of the lynchings that were occurring in Mississippi and elsewhere in the South. (Unlike many of his era, Roosevelt was a strong supporter of black American rights, stating, “…the only wise and honorable and Christian thing to do is to treat each black man and each white man strictly on his merits as a man, giving him no more and no less than he shows himself worthy to have.”)

Among the millions of Americans who read of the incident, and particularly among those who saw this cartoon, was a couple from Brooklyn, New York, Morris and Rose Michtom. Morris was a Jewish immigrant who some 19 years before had fled the Russian pogroms, arriving in the United States with pretty much nothing but the clothes on his back as a teenager. At the time of Roosevelt’s bear hunting incident, Morris and his wife owned a small penny-item store, selling candy, small home-made toys and other such items.

When Morris saw Berryman’s cartoon, he suggested to Rose that she use her sewing talents to design and build a stuffed bear to honor the event. (Rose often made small children’s toys this way to sell in the shop.) The next day they displayed the bear in their store window and called it “Teddy’s bear,”  resulting in many customers asking to buy the bear.

Detecting that there might be customer interest potentially beyond a handful of bears, they decided they probably needed the president’s permission if they wanted to mass-market the bears with that name. Thus, they sent the original bear to Teddy Roosevelt as a gift for his children and asked if he would allow them the continued usage of the name “Teddy’s Bear” (eventually to become “Teddy Bear”). Not thinking there was any harm, nor even that there would be much of a market for such a thing, the President agreed.

Popularity of teddy bears exceeded even the Michtom’s wildest expectations. Sales were such that they soon left their candy store behind to begin selling the bears throughout the United States and then later the world. Further expansion happened in 1907 when they opened the Ideal Novelty and Toy Company, which rapidly grew beyond selling stuffed bears and, shortly after WWII, became the largest doll making company in the United States for a time. More recently, they are known for creating the game Mouse Trap and introducing the Rubik’s Cube to America.

Interestingly enough, the stuffed bear was also independently created around the same time in Germany by the Steiff company. Margaret Steiff relied on her sewing skills to provide for her family. She started off by sewing stuffed elephants and then eventually added other animals to her collection of sellable goods. When her son designed a teddy bear based on the real life mammal he had recently seen at the zoo, his mom added bears to the collection, although with no knowledge of the growing popularity of that same item in the United States.

The bears made their debut to the greater public at a toy show in Leipzig, Germany. The lovable bear caught the attention of an American toy buyer who bought 3,000 of Steiff’s bears. Although Steiff bears wouldn’t become known as teddy bears until 1906, their early success started the international teddy bear craze. Like the Michtom’s, the Steiff Company started mass producing teddy bears and remains successful to this day designing and selling plush toys and collectibles.