The Origin of the Expression “Guess what? Chicken Butt!”

July 6, 2016 Melissa
Mark R. asks: Where did the whole kids thing of saying “Guess what?” and answering with “chicken butt!” come from? 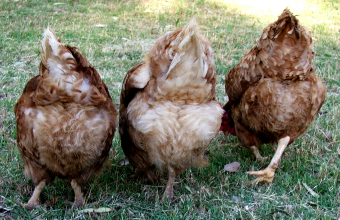 An appropriate response to nearly any rhetorical playground question from “What’s up?” to “Guess what?”, “chicken butt” has been an important part of the childish lexicon for many decades.

The retort’s origins are usually speculated to have come from a practice common to street merchants when they would call out what they were offering and how much it cost. One particularly delicious item was advertised as:

Butt, in this sense didn’t mean the back end of the bird, but, rather, its shoulder. A long time ago, butchers would pack less desirable cuts, like shoulders, into barrels, either to store them or ship them. Barrels like these had been called butts since the late 14th century, after the Modern French word for a barrel or wineskin, botte and the Latin buttis (for cask). Over time, the term was applied to the cuts of meat within the barrels as well.

It’s hard to verify when a chicken shoulder cost $0.05, although historical data on the cost of a whole chicken is relatively easy to find. For instance, during the Roaring Twenties, hens were sold for between $0.36 and $0.38 per pound (about $4.43 today), but at the height of the Great Depression, the price of a hen had dropped to just $0.21 per pound (about $3 today).

One theory as to why the expression became so popular is tied to the 1930s. In 1935, George Gershwin’s Porgy and Bess debuted, and in it, Maria compares Sporting Life to a chicken, invoking the merchants’ chant:

I hates yo’ struttin’ style,

All that said, as far as I can find, there is no documented evidence of anything to the effect of “What’s up?” or “Guess what?” (or any of the many variants) followed by “Chicken Butt!” until Mississippian Charles G. Bell’s 1962 novel The Married Land.  In it, we find:

…but what as a boy he had spoken with boys, white and colored, when they ran and fought together (“What, what, chicken butt, come around the house and lick it up.)

Disregarding a rather interesting, though seemingly unrelated, 1970 work Psychoanalytic Study of the Child – Volume 25 in which one Ruth S. Eissler describes a girl named Naomi who uses some peculiar terms such as “chicken-butt” to mean “sex” and “cookie” to mean “vagina” and is described as “confusingly using words that she senses are somehow inaccurate…”, next up in the known documented instances of this phrase we have a rather telling instance appearing in the 1973 book Black Language by Malachi Andrews and Paul T. Owens. On page 73 it contains the following entry:

Chicken Butt- When someone calls out, “What?”, because they didn’t hear, a reply might be the rhyme, “Chicken Butt.” It means forget it; I am not going to repeat it. Junior flip usage.

In that same year, it was noted in the National Education Association of the United States’ Today’s Education Volumes 62-64 that at least some children were using “chicken butt” as a slang insult: “‘Mrs. Pratt, come check me off.’ If I paid no attention and helped somebody else, he might yell again, ‘Mrs. Pratt!’ If I still paid no attention, he might mutter something about my being a ‘chicken butt.'”

Following that up, the next documented instance I could find of the general phrase in question was in the 1983 work The Black Nation. In Volumes 3-5 of that work, the following appears:

So, from the documented evidence (and quite a bit of somewhat less reliable personal anecdotes), it would seem as if, whether actually connected to any early 20th century merchant slang or not, the phrase and its variants originated in southern black-American culture at least as early as the 1960s and probably a bit before. However, if the documented evidence is any indication, this phrase didn’t catch on among a wider audience until sometime in the late 1970s and 1980s, at which point it soon became a somewhat ubiquitous expression among all American youth, along with variants like “Guess what?” and rhyming offshoots like “Guess why?  Chicken thigh!” and “Guess who?  Chicken tattoo!”