July 29, 2016 Melissa
Jay G. asks: Why do fruits change colour and flavour when they ripen? 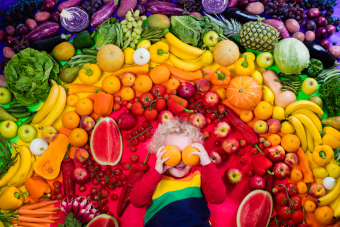 Fruits and vegetables (see: The Difference Between Fruits and Vegetables) come in a wide array of colors that change throughout their ripening process, with the brightest colors often occurring when the fruit is optimally ripened.  But why do fruits change color at all?

There are two ways to answer this question- first, looking at what’s going on internally while the fruit is ripening and second looking at why these plants have evolved to do this at all, especially considering it’s seemingly a massive waste of the plant’s energy and resources to produce fruit of any color around its seeds.

While there are many different types of fruits, speaking generally, many fruits start out some shade of green thanks to an abundance of chlorophyll, which, with the help of the sun and nutrients from the soil, is used to produce much of the contents of the fruit, at this stage mainly starch.  At a certain point in the fruit’s development, usually when the seed is nearly fully matured, the ripening process begins, in many fruits triggered by the naturally produced hydrocarbon gas ethylene.

Exactly how ethylene facilitates ripening is still an ongoing area of research, but, in a nutshell, receptors in the plant end up binding to the ethylene. This triggers certain genes to turn off and others to turn on, resulting in the creation of various enzymes that facilitate the ripening process, such as amylases, which converts the starch to simple sugars, and pectinases, which breaks down the cell walls of the fruit, softening it to make the inside more accessible.

While the enticing innards are being sweetened and made easier to access, the chlorophyll is broken down via hydrolytic enzymes, ultimately removing the green color.  As this is happening some pigments are getting synthesized while others that were there all along, but masked by the chlorophyll, are revealed. The two primary culprits producing the colors here are carotenoids, which are generally responsible for the orange and yellow colors in fruits, and anthocyanins, which are usually responsible for the purples, reds, and blues. (Incidentally, a similar process to this is what’s happening in autumn with tree leaves, see: Why Leaves Change Color in the Fall.)

Now for why certain plants have evolved to produce colorful, tasty fruit. Other than in science fiction, plants are relatively immobile so those that have survived over the millennia have evolved a few ingenious methods for spreading their seeds. Some have buoyant seeds that float on the wind or water, others are carried and buried by industrious rodents and mammals, while still others stick to the fur and feathers of passing fauna and hitch a ride. But perhaps the most common, and certainly the most scatological, way seeds are spread is when they are eaten, and later pooped out, by animals. Beyond potentially spreading the seed far and wide, this also has the side benefit of providing the seed a good starter of nutrition.

To facilitate this type of dispersal, fruits have evolved to become tastier when their seeds are ready and to change to a more noticeable color as a potentially attractive signal to animals that it is time to eat.

Animals that eat fruits are frugivores, including mammals, birds, reptiles, amphibians and fish. Among these, it appears that birds and mammals play the largest role in seed dispersal, and, in fact, more than 35% of all terrestrial birds and 20% of non-marine mammals are frugivores, at least to some extent. Nonetheless, the others have a role to play, and fish are especially key to dispersing tropical seeds, while tortoises and lizards are integral to seed dispersal in insular and arid ecosystems.[1]

As far back as the 19th century, Charles Darwin in On the Origin of the Species (1859) noticed that frugivores (or more particularly, birds) more commonly ate brightly-colored, as opposed to dull-colored, fruits. Subsequent studies discerned that, for European birds, the fruit they ate was most frequently red, while for those in the New World, and neo- and sub- tropics, black fruits are the most popular.

Interestingly, in those regions where fruit eating birds were less common, multi-colored fruits proliferated, and subsequent studies showed that birds were more likely to remove a fruit with more than one color than a mono-colored fruit. Similarly, in at least one study, scientists found that multi- and brighter- colored ripe fruits were more common in the understory (to be visible in the low light), while duller colors were found higher up (where it is easier for a fruit to be noticed).[2]

The hue, brightness and location of the variety of different ripe fruit colors has led many to conclude that color serves three purposes: (1) it draws attention to the fruit; (2) it reveals (or camouflages) the fruit’s location depending on ripening stage (often hiding when not ripe and revealing when the seed inside is ready for dispersal); and (3) it signals when the fruit is ripe and, thus, optimally tasty for its target consumer.

Of course, there may be other reasons why fruits have different colors, and one theory holds that blue, brown and black fruits may have evolved their dark colors as this “absorbs more radiation . . . thereby raising fruit temperatures [and] increasing metabolic and developmental rates.”[3]

Nonetheless, seed dispersal appears to be the primary purpose of a fruit’s coloring, as is the production of the tasty, juicy pulp, so sought after by the dispersers. In fact, it has been noted that “the energy allocated to produce the pulp . . represents a cost to the plant that probably has no purpose other than to attract seed dispersers and to protect the seeds.”[4]

In addition to transporting eaten seeds, it is believed that disperser ingestion also aids in seed germination. In the disperser’s gut, the pulp, which if not removed could preclude sprouting, is removed, as often is all or a part of the tough outer seed coating – the removal of which frequently speeds up germination. Another benefit of ingestion is that, as previously mentioned, when the seeds finally leave the disperser at a distant location, they are surrounded by a rich source of potential fertilizer (known to you and me as fecal matter).[5]