May 4, 2016 Karl Smallwood
Jeremy B. asks: Hypothetically, if I wanted to not pay for extra luggage on a plane, could I wear like five layers of clothing instead of bringing a suitcase? 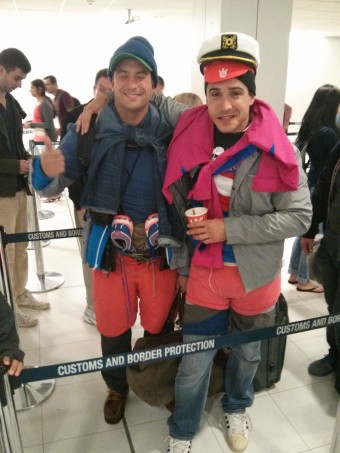 It’s a trope that has appeared in dozens of movies and countless TV shows, but can you actually circumvent an airline’s baggage fee by just turning up to the airport in all of your clothes?

Now the first thing we should point out is that there are a handful of documented cases of people doing just this. Consider the story of James McElvar, a member of a Scottish boyband called Rewind, who successfully managed to board a plane wearing: “Four jumpers, six T-shirts, three pairs of jeans, two pairs of jogging bottoms, two jackets and two hats”.

According to the BBC, McElvar was so annoyed at learning that his chosen airline wouldn’t let him take two pieces of hand luggage onto the plane without paying extra that he decided to simply wear all of the clothes in one of his bags to get around the problem. While details on exactly what happened to McElvar prior to boarding the plane are sparse, he was apparently able to make it through security without incident.

Once on the plane, he decided he’d simply take all the extra clothes off and put the items on the seat next to him, which was empty. However, he was told he’d have to wait to do that as he needed to sit down and buckle in for takeoff.

This didn’t work out for him. “I knew something was wrong early on as I just couldn’t breathe properly. I thought I was having a heart attack”.

Unable to take the heat (it was July at the time), he unbuckled and took off the extra clothing while the plane was taking off. But the damage was already done. McElvar became violently ill and began throwing up. A little later, he passed out, then briefly regained consciousness before passing out second time. According to ambulance personal who attended to McElvar shortly after his plane landed, he was “lucky to be alive”.

Despite the trouble it caused him (including spending a few days at the hospital), McElvar was able to skirt paying an additional baggage fee by wearing all his clothes, reportedly saving him a grand total of 45 pounds (about 70 dollars). If cost savings is your goal, we wouldn’t recommend this for our American readers, since, unlike the case of McElvar, the National Health Service won’t cover your medical bills…

Other documented instances of people getting away with this turned out much better for them, such as the case of a Chinese man who, after arriving at the Guanzhou Baiyun International Airport, was told his luggage was too heavy and he needed to pay extra.  Instead, he simply put on, according to the Guangzhou Daily, sixty shirts (for reference the world record for most shirts worn at once is currently in the mid-200s and changes frequently) and nine pairs of jeans. After this, he reportedly “looked like a sumo wrestler”. While he did have a bit of trouble getting through security (he was given a full body search after the metal detector went off), he was allowed to board the plane, in the end.

There is also the case of two unnamed individuals (pictured above) traveling from Singapore to Sydney who decided to skirt the $130 (£72) fee owing to their overweight luggage by simply lightening their luggage via putting on as many clothes as they could.

So it would appear at least a few airlines out there allow this sort of thing, even to the extreme, but what about the general case? It seems it’s completely fine. You see, despite our sincerest efforts, we could not find a single instance of an airline explicitly restricting the number of layers of clothing a person can wear aboard their flights.

The closest many come is in reserving the right to refuse a passenger boarding if said passenger is wearing something “obscene”. In the context of these rules, they are referring to lewd or otherwise potentially offensive clothing. However, one of the accepted definitions of “obscene” is “so large an amount or size as to be very shocking or unfair”. So we guess if a particular boarding agent wanted to be a stickler here, they technically have an out on this one.

Among other “technicality” type rules that might see you turned away, most airlines also have a “hygiene” rule that could potentially be applied given that wearing absurd amounts of clothing for any length of time will likely see you become a sweaty mess.

Beyond such technicalities, as mentioned, no airline we could find has any specific rules against this layering practice, nor could we find an instance of someone being turned away for doing this.

You might be wondering at this point about size restrictions. After all, wearing a lot of clothing can very quickly see you balloon up. It turns out, though, exceptionally few airlines in the world have an upper limit on how big or heavy a passenger can be. The only real guideline, in America at least, comes from the U.S. Federal Aviation Administration who state that a passenger must be small enough to be able to “lower their armrests and sufficiently buckle and fasten their seat belts”, for safety reasons.

Having said that, there’s no set industry-wide policy on either how big seats have to be or what you have to do in the event a passenger is too big to fit in them. Some airlines make larger passengers purchase an extra seat for the comfort of both themselves and other passengers.  Other airlines simply request that such individuals purchase wider seats towards the front of the plane, if available, and reserve the right to bump such passengers to a later flight if not. They also get around potential seatbelt length issues via providing seatbelt extenders.

For reference, the average width of a seat on a passenger plane in the US is about 17-19 inches, meaning as long as you stay within this limit with your many layers of clothing on, there seemingly is not really anything the airline will do to stop you boarding the plane and sitting down.

Of course, while you’ll likely have little trouble boarding the plane wearing five outfits, getting to the boarding gate requires going through security, members of which are very likely going to take an active interest in your clothing shenanigans. Then again, as long as you don’t do anything to antagonise them, and you’re willing to be poked and prodded a little more than normal, you’re probably going to be okay, at least if the known instances of people doing just this are any indication. And as a side benefit, a potential strip search would be a whole lot more comical; make sure your cell phone is loaded with Yakety Sax for full effect.

It should be noted here that when drawing up your pros and cons list debating wearing several outfits vs. paying a baggage fee, it’s likely that bringing the bag will win out in many cases, unless we’re just talking a single extra outfit or something. As we hope James McElvar’s story proved earlier- wearing many layers of clothing on a cramped, stuffy flight isn’t exactly comfortable and can easily lead to heat stroke. Beyond this, wearing tight or constricting clothing (which many layers of clothing would necessarily be unless your clothing sizes are scaled appropriately) on a plane is a really bad idea, particularly for long flights, as it dramatically increases the risk of developing deep vein thrombosis, a potentially fatal condition.

All that said, there are a handful of airlines in the world where wearing your extra clothing instead of checking it will get you nowhere in terms of cost savings. For instance, Samoa airlines currently charge via total weight of the passenger plus luggage. The decision to charge heftier customers more was made both to draw attention to the rising problem of obesity in the Pacific island nations (where obesity rates are amongst the highest on Earth) and to make the cost of flights, according to them, “fair”.  Officials note that under a typical ticketing system, the parents of a little child would normally have to pay just as much for a ticket as a 175 kg man, even though the child is cheaper for the airline to transport. But under this new system, the child flies extremely cheaply and those who cost the airline more to transport (adults and the more rotund among us) will be charged for this fact. The system also gets around any luggage issues. As one representative noted to ABC Radio, “There are no extra fees in terms of excess baggage or anything – it is just a kilo is a kilo is a kilo.” Uzbekistan Airways operates on a similar system.