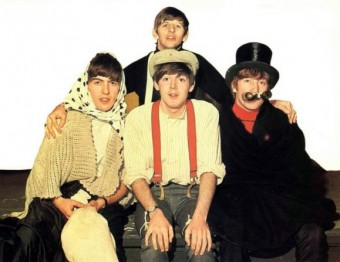 It was the Christmas season of 1963 when the Beatles agreed to star in “The Beatles Christmas Shows” at the Astoria Cinema in Finsbury Park, London. These shows had been arranged by the Beatles’ manager, Brian Epstein, and included several of his other acts including Billy J. Kramer and the Dakotas, Tommy Quickly and Cilla Black. These shows were, quite possibly, the oddest performances of the Beatles’ storied career.

With over 100,000 tickets sold before the first show, financially, the performances were a guaranteed smash hit, but on an artistic level… well, let’s just say the Beatles were lucky the internet and social media didn’t exist back then.

The traditional British Christmas shows always included a pantomime. George would later state, “We didn’t like doing pantomime, so we did our own show, more or less like a pop show, but we kept appearing every few minutes dressed up…for a laugh.”

The basic outline was as follows: the Beatles perform a few songs, go offstage and dress up in ridiculous costumes while the other groups on the bill perform. Next, the boys perform a corny skit, a fluff “melodrama.” After the skit ended, the Beatles would again run backstage, take off the hokey outfits as other acts filled in, and come back onstage to eventually perform the show’s finale.

The casting, at least, was “inspired”. John Lennon was “Sir Jasper,” the villain, complete with black cape and hokey black mustache. Paul McCartney was the good guy- “Fearless Paul,” the signalman. George Harrison played the damsel-in-distress, including a feminine scarf worn over his head. As for Ringo Starr, he was the only real pantomime in the skit, playing the “special effects”. For instance, he would be “rain” or “snow” or whatever effect was needed in the sketch. How? As “snow”, Ringo would reach in a container and throw snowflakes all over the stage and actors. (Yep.)

The basic plot of the skit was that “Sir Jasper” (John) would kidnap the helpless girl (George) and tie her (him?) to the railroad tracks, then “Fearless Paul” would come in and save her (him). All the while, Ringo as “special effects” would add rain, snow and various humorous effects…

The musical part of the Christmas show was, as expected, a smash. As for the other part… the Beatles gamely performed their required sketch with as much aplomb as they could muster up. But the sketch was hokey to the extreme.  It didn’t help (or maybe it did?) that thousands of screaming girls in the audience kept anyone from being able to hear much of the boys’ dialogue. That didn’t stop somewhat less than enthused men sitting close to the stage from being seen to heckle the Beatles for the ridiculous, haphazard performance. (If you watch carefully, you can even see in some of the surviving footage Lennon taking the time to shout “Shut up!” to some of the hecklers during the performance.)

“The Beatles were never much for rehearsals,” said Tony Barrow, their P.R. man. “That never really mattered as far as the songs were concerned, but the fact that they were so bad at doing the sketches was an added extra for the show- it was organized chaos, but it was very funny chaos.”

“Let’s face it,” said Paul, “They would have laughed if we had just sat there and read the Liverpool telephone directory.”

The Christmas Show began on Christmas Eve, 1963. Then, the Beatles all went home to their families to celebrate Christmas. Strangely, after that, the “Christmas” shows continued through January 11, 1964.

“Because it was new to them,”, says Barron Knight, who was in the shows with them, “They didn’t make a fuss. But as the run went on, I think they realized it wasn’t really working. They wanted to be songwriters and pop stars; they didn’t want to be actors.”

Amazingly, even after these questionable shows, and at a time when they certainly didn’t need the money, the Beatles again agreed to do “Another Beatles Christmas Show” in 1964. These included another series of juvenile skits.  For instance, at the 1964 shows, John wore a blonde girl’s wig with pigtails, Paul and George each wore Victorian outfits, and Ringo wore a lion’s costume.

In August of 1965, the upcoming Beatles’ London “Christmas Shows” were announced. The shows were to feature the skits “Cinderella,” “Mother Goose” and “Little Red Riding Hood…”

Despite that the shows were once again expected to be a smash success financially, the Fab Four saw to it that the 1965 Christmas shows were canceled, marking the end of the Beatles’ career as “all-around family entertainers.”