The Biggest TV Talk Show Flop of All Time 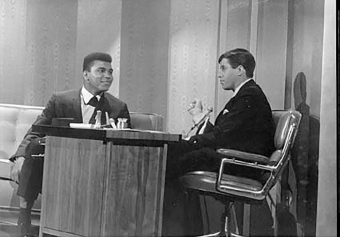 In 1962, Jack Paar, the controversial but popular host of The Tonight Show, unexpectedly quit and Johnny Carson was chosen to be the NBC show’s new host. In the interim, several temporary guest hosts took over, including Art Linkletter, Joey Bishop, Merv Griffin, Jan Murray, and Jerry Lewis.

Jerry did a stellar job as a guest host and ABC had an idea. Why not give Jerry Lewis his very own talk show?

At the time, Jerry was already one of the world’s most popular comedians and so didn’t need the work. But when ABC offered to make him the highest paid TV personality in history, along with granting numerous other concessions, he accepted their offer. “I’ll be in complete control,” Jerry said proudly at the press conference announcing the show. “I’ll be doing something I’ve never done before,” he added. “It’ll be what the people want. I’ll be playing it loose… I suppose I’ll have guests.” (The “I suppose I’ll have guests” line, stated by a talk show host, should have sent a red flag up to the ABC suits.)

To prepare for the show, Jerry orchestrated a massive renovation of Hollywood’s El Capitan Theater on Vine street, which had already recently been renovated by ABC to the tune of $400,000 ($3.1 million today). But as part of Jerry’s stipulations for agreeing to do the show, he requested and was granted an addition $4.5 million ($35.2 million today) for re-renovating the theater.

His first bit of business was renaming the building the “Jerry Lewis Theater”. Then, Jerry’s renovation plans went into effect. The walls were lined with gold vinyl wallpaper and the stairs with eighteen hundred yards of thick red carpet. An outdoor patio was built, with a speaker system installed within the brick, playing music as embers flared. Jerry’s host desk was even equipped with a control panel that allowed him to override the show’s director and control shots while the show was in progress. To top it all off, Jerry insisted that each cameraman and staffer be decked out in a formal tuxedo.

“Oh my god, the money,” said ABC producer Bill Harbach. “There was a plaque of [Lewis’] profile in bronze in the cement. His dressing room was all brass fittings and mirrors.” Even the tile in Lewis’ dressing room shower had “JL” etched into them.

Comedian Phil Silvers took it all in and told Jerry, “It’s a little nauseating. The designer of this joint must have been smoking hashish.”

Besides the monotonous boredom of the overlong show itself, mechanical and technical difficulties ensued. As Jerry greeted the audience with a cordial “I’d like to say welcome to all you nice….,” shrieking electrical feedback deafened the crowd. The overhead microphone went dead and communication with the control room was cut. Next up, Lewis delivered his opening joke: “I realize two hours is an unusual amount of time, but have you ever heard anyone say, ‘What can Liz and Dick do for two hours?'” (referring to Elizabeth Taylor and Richard Burton)

If that wasn’t bad enough, during the show the red light on each camera, that indicated which camera Lewis should look into, stopped working. The giant monitor installed in the balcony also malfunctioned and the upper section of the audience walked out mid-show.

The next morning’s reviews were less than kind.

Variety: “It’s truly amazing that so much could have gone awry. [the show] came off as disjointed, disorganized, tasteless. It was, in truth, an imaginative, uninspired, unfunny show.”

Time: “ABC has… the apparent illusion that several million people want to watch 120 minutes of the scriptless life of a semi-educated, egocentric boor.”

ABC panicked and blamed the show’s shortcomings on “the host’s Jewishness” and asked Jerry to “tone it down.” A young Dick Cavett was brought in to help with the show’s writing.

Cavett recalled: “[Jerry] was deeply depressed on at least two, maybe three, shows. You could watch Jerry go down, down, down, the showbiz equivalent of the Hindenburg.” (Aside: Contrary to popular belief, the majority of the people aboard the Hindenburg survived the crash.)

On November 18, 1963, after just eight shows and massive amounts of money already spent, ABC announced the cancellation of The Jerry Lewis Show. After taking a short break due to the assassination of John F. Kennedy on November 22, 1963, the show limped to a halt at the end of December, airing five more disappointing episodes.

While it was a complete flop, its star pocketed a reported eight million dollars (about $63 million today) after ABC bought out his contract for the rest of the episodes, making him the highest paid per episode TV personality in history up to that point. Unsurprisingly given the lavish preparations and extreme amount the network had to pay Lewis to get him to agree to the show in the first place (between the two totaling about $13 million or $102 million today), the Guinness Book of World Records at one point listed The Jerry Lewis Show as the most expensive TV talk show of all-time.

After all the residual dust of the massive failure had settled, Jerry Lewis took out a full-page ad in the trades. The ad was nearly completely blank, with one word in the center of the page in small type and his signature at the bottom. The word?  “Oops”