Why Do They Say “Mush” to Make Sled Dogs Go? 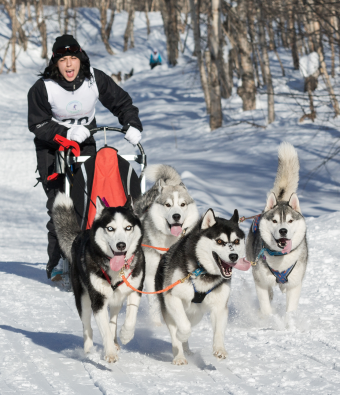 If we relied on Yukon Cornelius from the 1964 Christmas classic Rudolph the Red-Nosed Reindeer to teach us about dog sledding, we might be slightly misled. In multiple instances throughout the movie, Cornelius cracks the whip and hollers, “Mush, mush!!” to his dog sled team. But do mushers actually say this?  You might be surprised given that they are literally called “mushers” that no, not really. So why are they called “mushers” and where did the idea that they yelled “mush” to their dogs to get them to run come from?

Dogs have been used to pull sleds in certain regions of North America for at least a thousand years (and even further back in regions such as modern day Siberia where it’s thought they were using dogs for this purpose as much as three millennia ago). But we have to fast-forward significantly through history to get to the first “mush.”

The genesis of this term dates back to the 16th century when Jacques Cartier claimed the Gaspé Peninsula (in present day Eastern Quebec) for France.  Claiming is one thing, actually ruling is another given that there were already many humans living there.  Unsurprisingly, clashes between the French and various native groups became somewhat commonplace in the region.  But while they occasionally battled, they also picked up a few things from one another. Most relevant to the topic at hand, the French soon adopted the practice of using dogs to pull sleds in the region and by the 18th century, this became the common means of transportation in the winter in the northern most areas of New France. In 1749, one Peter Kalm who was traveling through Quebec, noted of this,

In winter it is customary in Canada, for travellers to put dogs before little sledges, made on purpose to hold their cloathes, provisions, &c.  Poor people commonly employ them on their winter-journies, and go on foot themselves.  Almost all the wood, which the poorer people in this country fetch out of the woods in winter, is carried by dogs, which have therefore got the name of horses of the poor people.  They commonly place a pair of dogs before each load of wood.  I have, likewise seen some neat little sledges, for ladies to ride in, in winter;  they are drawn by a pair of dogs, and go faster on a good road, than one would think.  A middle-sized dog is sufficient to draw a single person, when the roads are good.

With the signing of the Treaty of Paris in 1763 at the conclusion of the Seven Years’ War, France ceded most of its territories in North America to Britain. What does this have to do with dog sleds and mushing?  The French dog sled drivers would commonly use “marche” (walk) as the command to get the dogs to start moving.  When the British took over, this is thought to have eventually given rise to the English dog sledding command “mush,” with the first known instance of this term (referencing dog sledding) popping up in 1862. (“Mush” as in a kind of porridge pre-dates the dog sledding definition by a couple hundred years.)

The English dog sledding “mush,” in turn, led to the creation of the term “musher” as the name for the dog sled driver that is still used today. However, “mush” itself is almost never used anymore as many mushers consider it too soft of a sound to be used as a distinctive command, particularly when driving the dogs through windy, blizzard-like conditions.  Instead, many prefer commands such as “hike,” or “OK,” often with “let’s go!” and “all right!” tacked on to get the dogs moving. (And if you’re curious, see: Why Do American Footballers Say “Hut, Hut, Hike!”)