How and Why Oysters Make Pearls 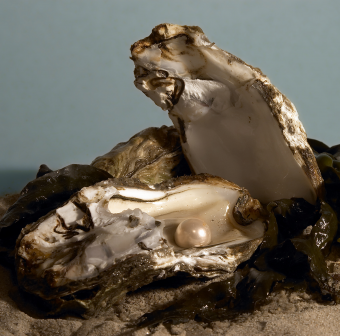 Oysters make pearls as a defensive response to foreign objects. The process begins when some foreign body, such as sand, a parasite or some other organic material, manages to make its way inside the oyster’s shell and comes in contact with the mantle, a layer that protects the oyster’s internal organs, sometimes even damaging it.

The oyster’s body sees the invading substance as a potential threat, and in response the mantle begins to deposit a substance called nacre, also called mother of pearl, onto it. This is the same substance that coats the inner part of the shell. External damage to the shell itself that results in damage to the mantle will also trigger the same type of response to repair the damage.

Nacre is composed of calcium carbonate, in the form of mineral aragonite and calcite, and the proteins conchin and perlucin which form a substance known as conchiolin that more or less functions as the “glue” that holds the layers together. While the mineral aragonite has a crystal structure, the conchiolin is very porous. These, combined with the slightly translucent nature of the layers, contribute to the pearl’s ultimate shimmery/luminous luster.

Over time, the oyster will apply several layers of nacre to the foreign body, effectively walling it off from the oyster itself and forming a pearl of some shape, with the shape of the invading body being one potential contributing factor to the ultimate shape of the pearl.

The internal process of pearl creation is mostly the same whether the pearl was created naturally or cultivated. However, despite generally needing to do an X-ray test to determine whether a given pearl was cultivated or grown naturally (natural pearls tend to have microscopic cores so only show concentric growth rings at the center vs cultivated ones that show a solid core), natural pearls are usually far more expensive simply because they are more rare, particularly the spherical variety so sought after for making jewelry.

On the cultivated side, pearl farmers allow baby oysters to grow for two to three years in cages suspended in some body of water that is suitable for keeping the oysters thriving. Once the baby oysters have reached maturity, they can then be used for the cultivation of pearls.

While there are variations on the specific methods used, in general with saltwater cultivate pearls, pearl farmers (usually) use mother of pearl nuclei. These are balls of ground, polished mussel shell measuring between 2.5 mm and 8 mm in diameter. The choice of nuclei is important not only to help maximize the probability of getting a spherical pearl, but also because the core material needs to have similar thermal expansion properties as the nacre.  If it does not and, say, the core expands faster when heated (like when a hole is being drilled in the pearl to make a bracelet or necklace) it can ultimately shatter the outer layers of nacre coating.

With freshwater shells, beaded nuclei are not usually used, though there are exceptions for both saltwater and freshwater beading practices.

In both cases, once the oysters are mature enough, they are removed from the water and placed in a dry, shady location for about a half an hour. This generally results in the oyster opening its shell at some point. Pearl farmers will then place a wedge between the open shells to keep them that way. Any oyster that does not open its shell is placed back into the water and the pearl farmers will simply try again later.

Once wedged open, the oysters are transported to another area where workers may or may not need to delicately force the shells apart a bit more to increase the size of the opening. This step must be done carefully because opening an oyster’s shell too far can kill it.

In beaded shells, workers then carefully make a tiny, precise incision in the oyster’s soft body and insert (usually in the gonad) the prepared nuclei along with a tiny square of living mantle tissue harvested from another oyster. Typically about one killed oyster can provide enough mantle for 15 or so implantations, with the tissue generally staying alive and functional at secreting nacre for a couple hours. Both the nuclei and prepared mantle tissue needs to be in contact with one another to insure a pearl sack will ultimately form.

In non-beaded shells (usually freshwater), only the tiny bit of living mantle is inserted.

Another distinction between the two is that, in the non-beaded pearls, as many as a couple dozen pearls can be grown at once in a single oyster if multiple implantations are put in place.  This is why freshwater pearls are generally much cheaper than saltwater ones, even though the desirable attributes of the end product really don’t differ based on freshwater or saltwater with modern techniques. (Classically, saltwater, beaded pearls tended to produce a much higher percentage of spherical pearls, with freshwater pearls tending to be more rice shaped, but that isn’t so much the case anymore.)

In both cases, after the implantation is complete, the wedge is removed and the oyster is placed back into water.

Unsurprisingly, the whole process delivers quite a shock to the oyster. It takes them as much as six weeks to completely recover from it, if at all. After they’ve been given adequate time to recover, pearl farmers will again remove them from the water to make sure they have started layering nacre on the inserted object.

Those oysters that did not survive the shock are discarded at this point. The healthy ones where implantation was successful continue the process of creating a pearl over time, sometimes taking as much as 5-6 years before the pearl is ready to be harvested, though pearls with beaded nuclei can generally be harvested much quicker, even in some cases in as little as 6-12 months.

With such a regimented process, you might think the success rate on cultivated pearls is high, but in fact, only about half the oysters initially seeded will ultimately survive and produce pearls. And of those pearls, only about five percent will be of high enough quality to meet the standards to be further processed for high end jewelry. After that, it takes sorting through about 10,000 jewelry grade pearls to find enough matching ones (in color, shape, luster, and size) to make a single high end pearl necklace.