Our Father, Who Art In London 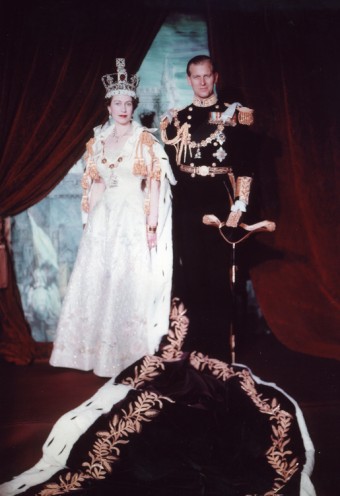 North of New Zealand, east of Australia, and west of Fiji there’s an island that’s home to one of the more unusual religious sects we’ve ever come across.

The nation of Vanuatu is independent today, but from 1906 to 1980, this island group in the South Pacific was a colony jointly administered by England and France. Then called New Hebrides, it was perhaps the only territory in the world with two colonial masters instead of one. Relations between the two countries were often strained and remained so as New Hebrides moved toward independence in the 1970s. England backed one political party in a bid to retain their influence; France backed another.

Both countries also worked to sway public opinion in their favor. In this battle, the British had a weapon that France could not counter: the prestige of the British royal family. Portraits of Queen Elizabeth and her husband, Prince Philip, were distributed all over the 65 inhabited islands that made up New Hebrides. In 1974 the couple even paid a visit, steaming into the capital city of Port-Vila, on the island of Efate, aboard the royal yacht Britannia.

The royal treatment worked. The British-supported party won a majority in the Vanuatu parliament in the first elections after independence…but victory came at an unusual price: 128 miles south of Efate on the island of Tanna, an aboriginal tribe of some 300 people called the Kastam came to see Prince Philip as a god in human form and began to worship him as their messiah.

Life in Yaohnanen, the isolated hillside village that is the tribe’s home on Tanna, has changed surprisingly little since their ancestors arrived some 2,400 years ago. The villagers live in bamboo huts, and what little traditional clothing they wear—skirts for the women, and nambas, genital sheaths resembling whisk brooms, for the men—they make themselves out of plant fibers. There is no electricity in the village, no running water, no radio, no television, no newspapers, and no Internet. Pigs are the only form of currency. Members of the tribe rarely leave the island, and what little contact they have with the outside world comes from the few visitors willing to make the difficult trek to the village. The language spoken by the Kastam has no written form, and most tribespeople are illiterate. More than a century of contact with missionaries determined to stamp out Kastam culture and traditions has left the tribe wary of change; the few families who desire formal education for their children have to send them outside the village to get it because there are no schools in Yaohnanen.

It’s a safe bet that all of those royal portraits passed out in the 1970s had something to do with the isolated Kastam coming to see Philip as a living god. Their tribal culture is male-dominated; they have difficulty conceiving of a Great Britain in which Queen Elizabeth is the head of state and her husband has no constitutional role whatsoever.

When the tribespeople were presented with portraits of the royal couple and told that the queen was one of the most important women in the world, they naturally assumed, based on their own cultural experience, that the man standing next to her in the picture was even more important than she was.

OUR FATHER, WHO ART IN LONDON

This conclusion dovetailed nicely with the tribe’s creation myth: where the Judeo-Christian world has Adam and Eve, the Kastam have the story of two spirits, one dark-skinned and one light-skinned, who emerged from Mt. Yasur, the active volcano that dominates the landscape of Tanna. The dark-skinned spirit remained on the island and founded the Kastam, whose members also have dark skin. The light-skinned spirit traveled far away in search of a queen to marry and fathered the light-skinned races of the world. (Another legend says that the volcano god sent his oldest son to the U.K., both to give spiritual guidance to the British and to prevent their missionaries from converting the Kastam to Christianity.) Exposure to those same missionaries and their teaching about a returning messiah likely put the next piece of the puzzle into place: the idea that someday the light-skinned spirit would return, ushering in Paradise when he arrived.

What was it that finally cemented the notion that the spirit had taken the human form of Prince Philip? When the royal yacht Britannia brought him (and the queen) to Vanuatu in 1974, the chief of the Kastam, Jack Naiva, was one of the dignitaries on hand to welcome the royal couple. Like other tribal leaders, he was on the water paddling his canoe when the majestic 412-foot royal yacht sailed into port. It may have been the biggest ship he’d ever seen, and it made quite an impression. So did Prince Philip. “I saw him standing on the deck in his white uniform and I knew that he was the true Messiah,” the chief told the London Daily Mail in 2006.

Chief Jack must have hoped that Prince Philip would come to Tanna Island, but the royal visit to Vanuatu was a short one, and the Britannia soon sailed off again. Philip never did visit Tanna, and in the more than 40 years since, he hasn’t returned to visit it or any of Vanuatu’s other islands.

But that hasn’t stopped the Kastam from believing that Philip, who turned 93 in 2014, not only will return but has promised to do so. When he does return, the Kastam believe that a miraculous age will dawn, much like the one Christians believe will accompany the second coming of Christ. Mature kava plants, which the tribe uses to brew a potent drink of the same name, will burst forth from the soil the moment Philip sets foot on Tanna. He will bring a wealth of material goods with him—everything from knives for sticking pigs and shovels for digging up yams, to electric appliances, pickup trucks, and all the cigarettes the Kastam can smoke. They won’t have to worry about the adverse health effects of smoking, either, because Philip will banish sickness and death when he arrives. Old people—Philip included—will become young again, shedding their skin like snakes to reveal their rejuvenated selves underneath.

HOME AWAY FROM HOME

To be ready for Prince Philip’s arrival, which like the Rapture could come at any moment, the tribe has planted a garden for him and built the hut that he will live in. Like the rest of the dwellings in the village, Philip’s hut has a dirt floor and lacks electricity and running water. “I know that in England he had a palace and servants, but here he will just live simply, like us,” Jack Naiva’s grandson Sikor Natuan said in 2010. There are no closets in the hut, but Philip won’t need any: the tribe believes that as soon as he arrives he’ll shed his Western clothing for a namba genital sheath that is tied around the waist with a cord. Other than that, he’ll be completely naked, just like the men of the tribe.

The Kastam expect that Prince Philip will take several wives when he arrives, and the candidates have already been selected. These women have not been prevented from marrying other men and starting families while they wait for Philip, but he can still claim them when he arrives. “Don’t worry. Whichever one Prince Philip picks will leave her husband willingly,” Chief Jack assured reporters in 2008. Bonus: if Queen Elizabeth becomes lonely after Philip returns to Tanna, the tribe has offered to dispatch a warrior to London to keep her company. 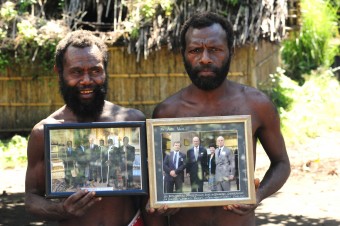 So what does Prince Philip think of all this? He’s aware of the Kastam and their interest in him, and he met with five members of the tribe who visited the U.K. in 2007 as part of a documentary film project. But at last report he still had no plans to visit Tanna. His daughter, Princess Anne, visited Vanuatu in 2014 but did not go to Tanna.

Philip has exchanged letters and gifts with the Kastam over the years. When the tribe sent him a pig-killing club called a nal-nal in the 1970s, he reciprocated with a framed photograph of himself holding the club. This and other photos and letters he has sent the tribe are among their most treasured possessions; they are kept in a special hut that serves as a shrine.

The Kastam have enough contact with the outside world to understand that their beliefs appear odd to others, but it doesn’t faze them. “Christians have been waiting 2,000 years for a sign from Jesus, but our Philip sends us photographs!” Chief Jack Naiva told a reporter in 2005. “And one day he will come.”