This Day in History: November 26- Nicky and Alix 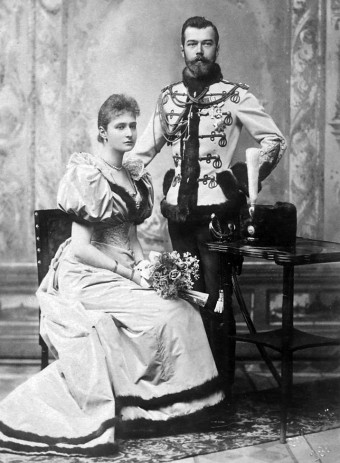 “I am yours, you are mine, of that be sure. You are locked in my heart, the little key is lost and now you must stay there forever.” – Alix to Nicholas

They first met in 1884 when Princess Alix of Hesse (later Empress Alexandra) was 12 and Nicholas was 16 at a family wedding. Since they both sprang from the rarified – and intermarrying – world of European royalty they were not only closely related through multiple lines, but saw each other quite regularly through the years. She made enough of an impression on him that he scrawled in his diary that he dreamed of marrying her one day.

Princess Alix of Hesse was the granddaughter of Queen Victoria. The Tsarevich Nicholas, heir to the Russian throne, was very taken with lovely 17 year old Alix when she came to visit her sister Ella in St. Petersburg in 1889. Shy and somewhat serious, Alix was interested in Nicholas as well, but there were plenty of obstacles in the young couple’s path to matrimony.

For starters, the Tsar wanted his son to marry a French noblewoman and not the daughter of a minor German prince. Alix was also a devout Lutheran, and any bride of a future Tsar would have to be willing to convert to the Russian Orthodox faith. Considering her level of commitment to her religion, it was widely assumed Alix would never agree to this, despite her love for Nicholas.

So Alix returned to Germany, and Nicholas began a dalliance with a ballerina from the Imperial Ballet and his father continued his plans to find a good political match for his son. But Nicholas couldn’t get Alix out of his head, and by 1892 was compelled to write in his diary,

My dream is to one day marry Alix. I have loved her for a long time, and still deeper and stronger since 1889, when she spent six weeks in St. Petersburg. For a long time, I resisted my feeling that my dream will come true.

Most all of Europe’s royalty gathered in Coburg, Germany for the marriage of Alix’s brother in the spring of 1894. Nicholas begged his father’s permission to propose marriage to Alix while still in Coburg. The Tsar was reluctant, but when his son added that he would wed Alix or no-one, believing him to be serious and with the Tsar’s health declining despite only being in his 40s, he ultimately relented.

Nicky (as he was known in the family) wasted no time. He went to Alix’s rooms and popped the question. The choice between her religion and her love was a torturous one for the young woman and she initially declined his proposal because of it, hoping he would rescind that requirement. However, Grandmama Queen Victoria, among others, talked Alix into converting to Russian Orthodoxy. By the next day, Alix decided to accept Nicholas’ offer.

The following morning, the ecstatic couple had coffee with a delighted Queen Victoria, who was very fond of Alix, particularly for Alix previously having the gumption to slough off family pressure and refuse marriage to Prince Albert Victor, the eldest son of the Prince of Wales, despite the Queen herself pressuring her. At this point, she was already in love with Nicholas.

In the end, Queen Victoria was very pleased with the match and enjoyed sharing in the couple’s happiness. Nicky and Alix were an oddity among royalty engagements – a marriage contracted for love. It may have reminded Victoria of her own engagement to her beloved Prince Albert.

Not long after their betrothal, the prospective groom’s father Tsar Alexander III’s health continued to unexpectedly decline. Alix was summoned to St. Petersburg, and the couple kept vigil at his bedside with Empress Marie and the rest of the Imperial family for ten long days.

The young couple was blindsided by the Tsar’s sudden death but they decided to continue with plans to marry as soon as possible. Their wedding was on November 26, 1894, a week after Alexander’s funeral. The ceremony was a simple affair out of respect for the recently departed Tsar. Alix wrote to her sister about the wedding, stating,  “Our wedding seemed to me, a mere continuation of the funeral liturgy for the dead Tsar, with one difference; I wore a white dress instead of a black one.”

Nevertheless, the young couple were just happy to be together. As Nicholas wrote in his diary, “Every hour that passes, I bless the Lord from the bottom of my soul for the happiness which He has granted me. My love and admiration for Alix continually grows. There are no words capable of describing the bliss it is to be living together.”

By spring, they were expecting their first child.

Their lives would end in tragedy, killed at the hands of the Bolsheviks in 1918 with their entire family. But until their last breath they seemingly remained as they began, devoted to one another.