Who Gets the Royalties for Hitler’s Book? 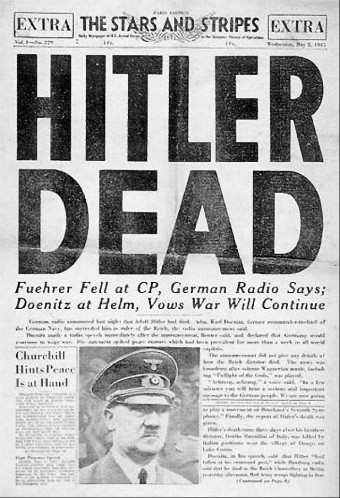 Mein Kampf, the autobiographical, anti-Semitic hate-manifesto written by Adolf Hitler in the 1920s is one of the most controversial and infamous books of all time. As you might imagine, this has resulted in millions of copies of the book being sold since Hitler did the world a major favour and heroically (and with no regard for his own personal safety) managed to infiltrate the Führerbunker and take out one of the most hated individuals of all time- himself- in 1945. So, ever since Hitler fired a Walther PPK at his own head, who’s been collecting the royalties from sales of the book, how much did Hitler make off it before that, and why’d he write it in the first place?

Hitler initially began dictating and drafting the outline to Mein Kampf while imprisoned in 1923 after a failed attempt to seize power in Bavaria in a coup d’état which eventually became known as the “Beer Hall Putsch“. Conceived by Hitler as a way of simultaneously spreading Nazi ideals and paying off the massive debts he had racked up, the future-Fuhrer realistically expected that his book would only primarily appeal to those who were either in or sympathetic to the National Socialist Party. For the most part, Hitler was right (a sentence this author sincerely hopes is never taken out of context in the future) and upon its release in 1925, it sold a modest 9000 copies, nevertheless earning him a nice little income. 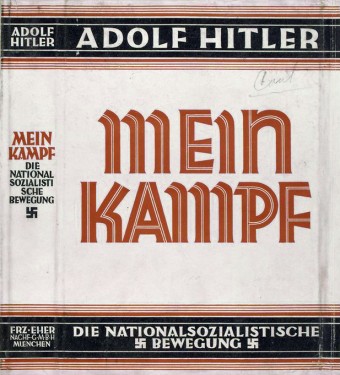 Over the next few years, as Hitler’s star rose in German politics, sales of his book similarly increased. Legitimate sales of the book peaked in 1933 (the year Hitler became Chancellor of Germany) with a reported 850,000 copies being sold that year. (In total, it’s estimated that around 10 million copies of the book were sold during Hitler’s lifetime.)

Padding these totals significantly, when Hitler became Führer (“leader/guide”), millions of copies of the book were purchased by the German government and were distributed for “free” to German soldiers and newly married couples. In doing this, Hitler ensured that he earned royalties for every one of the “free” books handed out by the government by declaring that local authorities had to pay to cover the book’s cost before giving them away.

It’s difficult to determine exactly how much Hitler earned from all these sales, but according to the documentary, Hitler’s Money, the total rang in at just under eight million Reichsmarks. Equally difficult, for a variety of reasons, is converting that amount to modern day dollars or pounds. But, as an extremely rough estimate, eight million Reichsmarks in the early 1940s would be equivalent to around $30 million at that time or about $430 million (£279 million) today. Whatever the case, given Hitler’s fairly lavish lifestyle in the immediate years leading up to (and then later including) his time as leader of Germany, and with most of his personal income coming from the book sales in the early going, it would seem his bank account was doing alright. Of course, we should note that this doesn’t take into account all of the money Hitler later acquired through various other means such as a licensing his image to the German government (earning him money every time they sold a stamp or other item with his face on it).

Hitler also maximized his personal income by simply not bothering to pay his taxes.  This created something of a problem for him initially, but he managed to string along the German tax office for years, at one point brashly claiming that he only owned “one desk and two bookshelves“, while simultaneously driving around in a brand new Mercedes. At other times he kept the tax officials at bay by insisting he’d pay off his tax bill in installments over time. This all culminated in Hitler receiving a tax bill of 405,500 Reichsmarks shortly after he became Chancellor in 1933. (For reference, the average annual teacher’s salary in Germany at the time was a little under 5,000 Riechsmarks.) Still not wanting to pay his taxes and now being in charge, he promptly had a representative of the ministry of finance declare that the Führer was “free of tax obligations” and the massive tax debt he’d accumulated was waived, along with future taxes he’d have otherwise owed.

While sales of Mein Kampf internationally were decidedly more modest, Hitler still made considerable amounts of money from them before the start of WW2, with it being noted that he made somewhere in the region of “$500,000 inflation adjusted dollars” from sales of the book in the UK alone.

As Hitler was officially a resident of Munich upon his death, the Bavarian government seized all of his property, including the rights to the book and immediately outlawed its publication in Germany. Despite this, the book is still published and sold with some success in other European countries and beyond today where it is not banned. As the legal copyright holder, Bavaria is entitled to any royalties from such sales and they do accept them, albeit begrudgingly before giving them to charity.

That said, when Hitler died his will instructed that any objects of “sentimental value or necessary for the maintenance of a modest simple life” be split amongst his living relatives and friends, while his art collection and remaining assets be split between an art gallery in his hometown of Linz and the National Socialist German Workers Party respectively. However, the Bavarian government decided to ignore this will as part of what we like to dub their commendable “screw Hitler initiative”, taking full ownership of his entire estate. While legally some of Hitler’s distant heirs could lay claim to what remains of Hitler’s estate (which is still estimated to be worth millions), none of them are willing to do so. (In fact, apart from not wanting anything to do with Hitler’s estate, the sons of Hitler’s nephew have even gone so far as to agree to never have children to end his bloodline.)

While rights to Mein Kampf belong to the Bavarian government throughout most of the world, in the UK and the US, things are a little different. In the UK, rights to the book belonged to Hurst & Blackett, who purchased rights to publish a translated version of the book from Hitler’s publisher in 1933. When Hitler died, Hurst & Blackett retained the rights and continue to sell copies of it to this day, though now under the name Random House (a publisher which bought them out in 1998).

However, the company, unwilling to profit from a work of Hitler’s, has for some time gifted all royalties made from the book to an anonymous charity. In 2001, it was revealed that the charity in question was The German Welfare Council. That council then stated that they were planning to return £250,000 of the £500,000 they’d received over the years via book royalty donations. This came as a response to the controversy that erupted to their ever having accepted such funds and being confronted by various prominent individuals, including the chairman of the Holocaust Educational Trust, who felt that profiting in any way from such book was inherently wrong, even if the money was being used for good. The £250,000 they’d already used from the sales of the book had been given to aid Holocaust survivors. The Welfare Council stated of all this,

When we agreed [in 1976] to the arrangement the generally accepted view was that there was a moral obligation to pass the money to Holocaust victims – but no Jewish charity would take it. The current board of trustees, however, has decided the funding is no longer appropriate – not least because we no longer deal exclusively with Holocaust victims.

This charity was chosen because of its work with Jewish refugees from Germany, but their number has diminished greatly over the years; most have died of old age. The problem now is that no one wants anything to do with the money.

Upon learning that the Welfare Council would be returning the money, Random House decided that they would distribute the unwanted funds and any subsequent royalties to “another appropriate charity“.

As to why the German Welfare Council had so much remaining from the donated book royalties, it was explained that, “We kept it in a separate bank account from other donations and used it only in emergencies. Holocaust victims who were helped by the charity may not have known about the donation and I fear that some might be offended.”

In America, royalties to Mein Kampf are collected by Houghton Mifflin, who bought the rights to the book from Hitler’s publisher in 1933. Interestingly, at least two other publishers (Stackpole and Reynal & Hitchcock) are known to have published unlicensed translations of the book in the 1930s by arguing that because Hitler self-identified as a “Stateless German” his book wasn’t copyrightable. Neither of these publishers paid any royalties to Hitler; in fact, Stackpole advertised the book by explicitly stating Hitler wasn’t getting anything from the sales of their version.

At the start of WW2, the American government seized all profits and rights to the book within the country. The government then held the rights to Mein Kampf until 1979. During this span, they made about $139,000 in royalties, with this money placed into the War Claims Fund before being paid out to victims of the war.

In 1979, Houghton Mifflin paid the US government $37,254 to quietly buy back the rights earning them an estimated $700,000 in royalties over the next two decades. However, when it emerged that the company had been making hundreds of thousands of dollars from sales of the book, they issued a statement stating that the royalties the book earned would be distributed to charities that promoted “diversity and cross-cultural understanding” and a host of other things Hitler would have hated. The Red Cross (founded by Henry Dunant with the intent to prevent and alleviate human suffering, without discrimination, see: A Memory of Solferino – The Fascinating Life of Henry Dunant) was one candidate for receiving royalties from the U.S. sales, but, like so many more before them, the organization reportedly declined the money.

Thanks to German Copyright law, Mein Kampf is scheduled to enter the public domain on the 1st of January, 2016 meaning there will likely be even more arguments and controversy about who, if anyone, should profit from Hitler’s hymnal of hate.