Has a Major English Dictionary Ever Spelled An Entry Name Incorrectly?

November 30, 2015 Melissa
Jon A. asks: Has there ever been an example of a word being spelled incorrectly in the dictionary and did that then become the new accepted spelling? 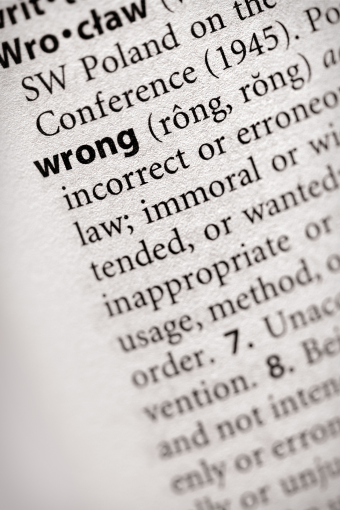 Despite my sincerest efforts, I could find no documented instance of a misspelled entry name (the word being defined) ever found in a widely circulated, non-user generated English dictionary. (I’m still skeptical it’s never happened, so please prove me wrong teeming masses.) The lack of mistakes in widely circulated dictionaries is presumably due to the extremely rigorous process words go through before being included, as well as the massive carry-over from year to year in the word databases, making it so only the first few editions of a given dictionary might be prone to such typos.

For example, according to Merriam-Webster, before a word is included in their dictionary, it is first identified by an editor and entered into a large database of citations that includes the word with the common spelling along with examples of its use and information on where it was found. The database, called a corpus, today includes an astounding 70 million potential words. Only those words that are sufficiently widely used over a large enough period of time are ripe for inclusion.

Even then, the word will not be listed in the dictionary until its appropriate segment is up for review by a team of editors and definers (who also have a say in which citations remain, as well as if anything further should be added).

Thus, given all of the people who look at and scrutinize every new entry, having a misspelling in the entry name included in an established dictionary would be remarkable.

However, to err is human, and even established dictionaries have been shown to (exceptionally rarely) make other kinds of mistakes. For example, in the 1934 version of Webster’s New International Dictionary, a completely contrived word, dord, was listed on page 771:

Surprisingly, this entry remained unnoticed until 1939 when one of the editors realized that dord lacked an etymology (citations noting the word’s origin, such as “N.L.” for “New Latin.”)

Upon further investigation, the editor found that dord came from a note sent by a chemistry consultant that had apparently gotten mixed up with the citations that were compiled for completion of the dictionary. It should be noted that since the 1880s when Webster’s began its citation system, each citation was also placed on a 3×5 inch card, which, coincidentally, was the note sent by the chemist that read:

Blame was laid at the feet of a couple of editorial stylists, the first of whom should have marked the “or” in the chemist’s note to be italicized (and which, ideally, would have identified that the D and d were abbreviations); instead, she made the cardinal sin of placing a wavy line underneath the entire “D or d”; a wavy line under letters or a word meant that everything above it was to be included in boldface. Understandably then, the typist, whose job it was to type as she was instructed, was justified in typing dord.

Remarkably, the word made it through a second round of stylist/typist processing, at which point the second stylist crossed out the “cont,” and substituted in “n.” for noun. At some unknown point later, somebody else gave it a pronunciation.

Shortly after discovering the error five years after it made it into the dictionary, dord was removed and “density, Physics” was added for D abbreviations.

Webster wasn’t the only distinguished dictionary to ever have egg on its face over an error, however. In 2010, a professor from the University of Technology in Brisbane, Australia, found that the Oxford English Dictionary had an erroneous definition of the word siphon.

A pipe of tube or glass, metal or other material, bent so that one leg is longer than the other, and used for drawing off liquids by means of atmospheric pressure, which forces the liquid up the shorter leg and over the bend in the pipe.

The error, of course, is that pressure doesn’t pull the liquid through, but rather, in the words of Dr. Stephen Hughes who discovered the error:

It is gravity that moves the fluid in a siphon, with the water in the longer downward arm pulling the water up the shorter arm.

After being alerted to their mistake, OED editors noted that the error had persisted since 1911, but that in at least one version, the 2005 edition, they had correctly identified gravity’s role in the process. There was no reason given for why this was changed in later versions.