Why Phone Keypads and Calculator/Keyboard Keypads are Arranged Differently 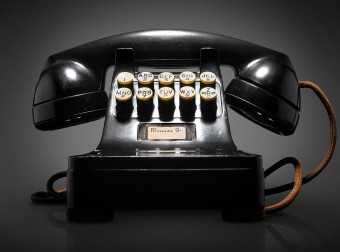 It’s not clear why numbering pads designed for calculation have 7-8-9 at the top, although the practice of placing the larger numbers above the smaller can be seen as far back as the late 19th century on early mechanical cash registers, often in this case with rows numbering vertically with 9 at the top and 0 at the bottom, and later morphing into the more traditional keypad we see today.

Quickly becoming standard, when companies like Sharp, Canon, Sanyo and Texas Instruments began making electronic calculators in the 1960s, they simply retained the convention. In fact, there is no record of any of these companies making the first desktop calculators actually doing any studies to determine if this type of layout was optimal for users. 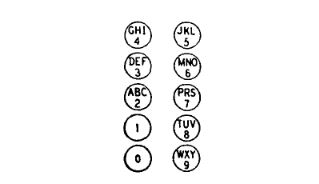 The standard phone keypad layout is an entirely different story. Before push button phone systems found their way into the home of the consumer, a version of this existed for phone operators, with a popular form being two vertical rows of five buttons with the numbers and alphabet laid out in a curious fashion, as picture to the right.

How this particular configuration was developed isn’t known, but whether or not this was really an optimal layout was something later studied, for instance in the paper Expected Locations of Digits and Letters on Ten-Button Keysets, published in a 1955 edition of The Journal of Applied Psychology.

In an attempt to determine the optimal configuration, rather than suggest specific number/letter layouts, the researchers simply gave various potential layouts and asked test subjects to fill in what they thought was the best configuration, given a particular layout. The results showed that, indeed, the aforementioned operator layout was not anywhere close to what people seemed to naturally expect: 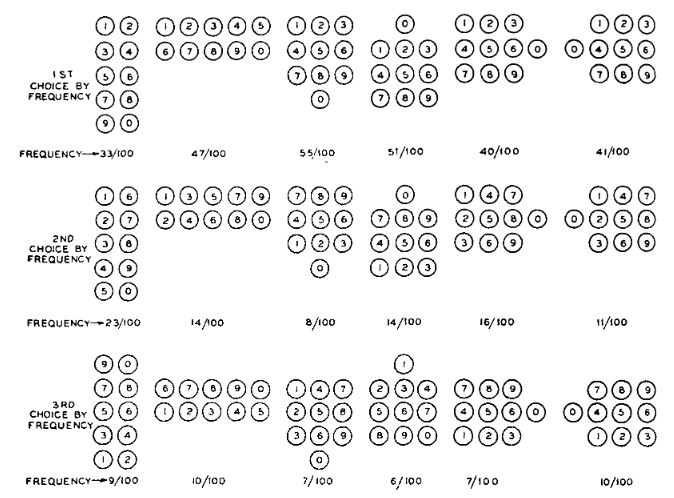 Of note here is also that the now standard 3×3+1 phone keypad layout resulted in a whopping 55% of those tested filling it out exactly as the phone keypad is laid out today while only 8% of the subjects filled out that pattern in the way calculators and non-phone keypads are traditionally laid out. 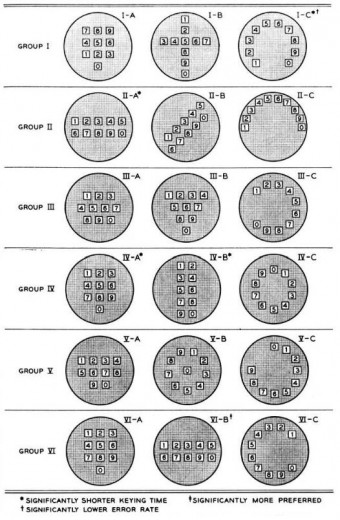 It was not, however, this particular study that influenced the layout of the phone keypad. Rather, this was the result of research performed by the engineers at Bell Laboratories, who more or less came up with the same results when in the early stages of the design of the push button phone. Hoping to find the ideal arrangement in terms of speed, accuracy, preference and business considerations, in 1960 the engineers studied 18 different configurations they deemed most efficient.

Randomly choosing 10-15 of their co-workers for each of a series of studies, the engineers had their subjects test one or two characteristics at a time (generally over a 3-5 day period), and these included aspects such as “keying time,” “errors” and preference.

Notably, one of their first realizations was that, much like had been revealed in the aforementioned Applied Psychology study, “the arrangement frequently found in ten-key adding machines [7-8-9 at the top] . . . was not the best” for keying phone numbers in its comparison group, although that “geometric configuration with a different numbering scheme [1-2-3 at the top] . . . was superior in keying performance” in its group.[1]

Next they compared those configurations that were found to be superior within their groups in terms of speed and preference with a keypad arranged in the same manner as a rotary dial (counterclockwise with “1” at the upper right). Those that were compared in this round were a “speedometer” configuration (clockwise with “1” at the lower left), a two horizontal column arrangement and a two vertical column set-up, as well as today’s “three-by-three plus one” keypad.[2] 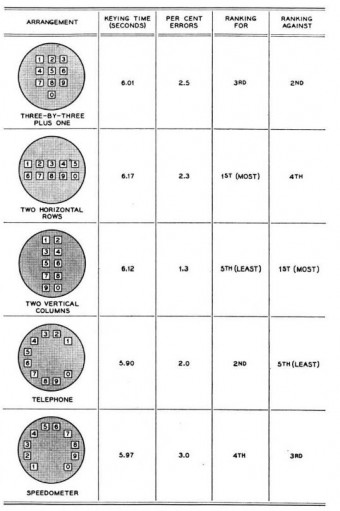 Although there was no significant difference in terms of keying speed or error rates among the configurations, and therefore that “any of the five arrangements was acceptable,” they instantly discarded the two vertical columns layout because “it was disliked by many subjects.”[3]

The test subjects’ favorite configuration was the two horizontal rows (in consecutive order with “1” at the top left and “0” at the lower right), the second most popular was the “telephone” (or rotary) style and the configuration we enjoy today was the study participant’s third favorite.

However, as “two of the rectangular arrangements . . . offered certain engineering advantages,” these were the two the scientists continued to work with, and they experimented with the size of the buttons and spacing between them. After several more tests, they found that the arrangement with the lowest error rate was the “three-by-three plus one” configuration.[4]

Although not explicitly listed as a consideration in the 1960 study, since letters also had to be displayed, and they were always in an alphabetical order, it must have also just made sense to the scientists to keep the “1-2-3” (with its “ABC” and “DEF”) at the top. And, indeed, the previous 1955 study also found that “With numbers already on the keyset: a) People expect to find the letters arranged in horizontal rows, beginning with the top row, for those patterns in which the numbers are arranged that way…”  They also found that even when the numbering system did not begin in the top row, about half the subjects in their study still preferred that the lettering pattern begin at the top and proceed horizontally across the rows.