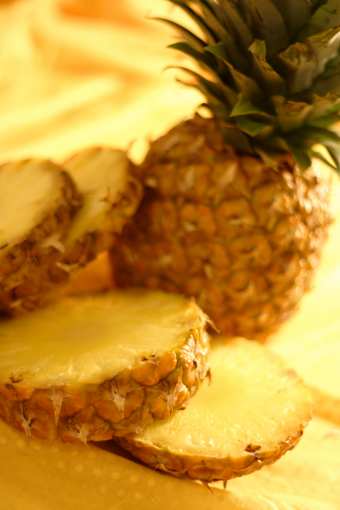 The humble pineapple is most often seen today either sitting proudly in the centre of an uncomfortably well stocked fruit bowl or being used as the home of a lovable talking sponge. However, between the 16th and 18th centuries, pineapples were so expensive and rare that they were often displayed like fine works of art.

Converting exactly how much a whole pineapple cost back in the 16th, 17th and 18th centuries to modern day dollars is almost impossible to do with any real accuracy. That said, the general ballpark estimates tend to ring in at around five to ten thousand dollars per pineapple, depending on such things as the quality of the fruit and season.

So how did this particular piece of fruit come to be so valuable?

After the pineapple was first encountered by Europeans on the island of Guadeloupe during Christopher Columbus’ second trip to the Caribbean in November of 1493, efforts were quickly set in motion to find a way of reliably producing the fruit back in Europe. (The fruit itself is indigenous to South America and had been cultivated there for centuries prior to its “discovery” by Columbus.)

Despite sinking vast sums of money into the problem, European royalty, who positively adored the fruit for its natural sweetness (sugar and sugary items being in short supply), for centuries after its “discovery” the only real way to obtain a pineapple was to pay to have one directly imported, which was no cheap affair. Many transport ships of the age were too slow and conditions too hot aboard the vessels to keep whole pineapples from rotting during the journey. So to get a whole pineapple fruit safely from the plant to one’s table in Europe took the fastest ships and most favorable weather conditions.  As a result, virtually the only people who could afford to purchase a whole pineapple, let alone eat one while it was perfectly ripe, were royalty or the ridiculously wealthy.

The first step to allowing the rich, instead of just the super rich, a chance to own or even look at a pineapple wouldn’t come for another two centuries after its “discovery”, when the Dutch were able to begin successfully cultivating the fruit in the very late 1600s.

Exactly who first managed to grow a pineapple in a non-tropical climate isn’t known for sure, though a woman named Agnes Block is generally credited as being the earliest to do so around 1687. While earlier accounts of fruit producing pineapple plants in Europe do exist, whether or not these plants were cultivated in Europe or simply transferred to the continent as juveniles isn’t clear.

More important than Block in the pineapple saga, however, was Dutch cloth merchant, Pieter de la Court, who is often cited as the individual who devised the most efficient (at the time) method of growing pineapples in a non-tropical climate. His method was mostly comprised of utilising hotrooms that were kept consistently warm and humid. These had to be carefully designed in order to vent the smoke and hot fumes out of the structure, while keeping the weather inside, as well as the soil temperature, within very specific ranges.  Accidentally burning down one’s pineapple hotroom or killing the plants with smoke was a very common thing in the early going.

After news of Court’s ability to grow pineapples and other exotic plants and fruits year round reached England, many nobles sent their gardeners to the Netherlands to learn his techniques first hand at considerable expense.

If you’re curious about why the Dutch had such a stranglehold on Pineapple production, it’s largely because the Dutch West India Company enjoyed an almost total monopoly on trade in the Caribbean at the time, allowing wealthy Dutch citizens to import numerous pineapple plants to experiment with, despite the expense.

As you can probably imagine from the many stereotypes that exist about British weather, growing pineapples in England proved to be rather difficult and it’s noted that only exceptionally skilled or vastly wealthy gardeners were capable of such a feat.

A man called John Rose is often mistakenly attributed with growing the first pineapple in England because of the existence of a painting commissioned by Charles II in 1675 in which he’s clearly shown presenting the king with a ripe pineapple. As it turns out, the pineapple seen in that painting, which was based on a real encounter the King had, was imported from the Bahamas and ripened in England by Rose.

As for the real first pineapple grown on English soil, that didn’t exist until around 1714-1716 when a Dutchman called Henry Telende was able to grow one for his employer, Matthew Decker, who subsequently had a painting commissioned in 1720 to celebrate the not unimpressive achievement.

Telende’s method of growing pineapples was quite involved, managing to maintain the perfect soil temperature via a specially designed hothouse containing tan pits lined with pebbles inside.  On top of the pebbles, he placed manure, then on top of that sat tanners’ bark (oak bark soaked in water). Finally, the pot containing the pineapple plant was placed in that.  Manure by itself created too much heat in the early going, but the tanners’ bark helped regulate that and provide a more even heat over time, keeping a steady soil temperature within the very specific range needed for growing pineapple plants.

Even after growing pineapples on English soil became a possibility, getting hold of one was still so costly that many nobles didn’t eat them, opting instead to simply display them around their homes as one would a precious ornament or carry them around at parties. Those who weren’t quite as affluent could also rent a pineapple for a few hours at a time. This pineapple would be passed around from renter to renter for their respective parties over the course of several days until finally being sold to the individual who could actually have the right to eat it.

Because of this, even among those who’d handled pineapples, very few ever actually experienced what it was like to eat a pineapple. Due to the natural sweetness of the pineapple, which was described as being akin to “Wine, Rosewater and Sugar” all mixed together, the fruit was seen as nothing short of a delicacy by the notoriously sweet-toothed English elite living in a time when refined sugar was a very expensive commodity.

Charles II in particular was said to love pineapple, partly due to its sweetness and partly due to him being amused by the fact the fruit looked like it was wearing a tiny crown; as a result, Charles II often referred to the fruit as the “King-pine”.

A final reason the pineapple was so popular, at least with artists, was its unconventional, striking appearance. As 16th century Spanish historian Gonzalo Fernandez de Oviedo y Valdes stated, “I do not suppose that there is in the whole world any other of so exquisite and lovely appearances… My pen and my words cannot depict such exceptional qualities, nor appropriately blazon this fruit so as to particularize the case fully and satisfactorily without the brush or the sketch.” 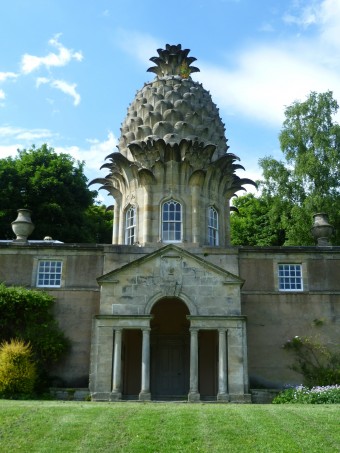 In fact, after the pineapple’s introduction to England, it became a prominent feature of art and architecture of the period, such as Scotland’s now famous Dunmore Pineapple (pictured right), commissioned in 1761 by the Earl of Dunmore.

So the next time you order a pizza and see that they casually put pineapple on it when you clearly told them not to (because who on Earth would want to sully delectable pizza with a sweet fruit? ;-)), remember that three centuries ago, even just having said fruit, let alone discarding bits of it off your main dish, would have been the ultimate sign of wealth and excess.