Why Oil and Water Don’t Mix 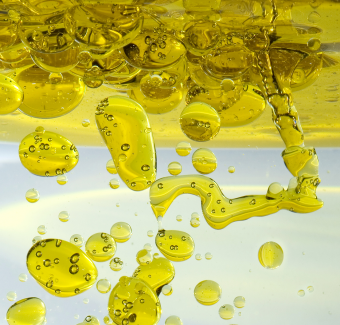 Made of different elements, and with distinct structures, densities and even dissimilar polarities, it’s no wonder oil and water don’t get along. They can be forced to cooperate, however, and there are several examples of this that are likely currently sitting in your pantry or refrigerator. But why don’t oil and water normally mix?

In fact, oil floats on water because it is less dense, with these super-tight hydrogen bonds between water molecules holding them closer together than the bonds between the fatty-acid molecules that primarily make up oil.

As for oil, it is a non-polar chemical. Since the atoms in the fatty acids in oil share their electrons nicely, they (usually) have no charge, or at least not enough to make the whole molecule polar. Given their lack of positive or negative charge, they are not attracted to a polar molecule like water. Given that oil essentially “repels” the water, it is called hydrophobic or “water fearing,” as opposed to hydrophilic or “water loving.” As such, eventually all the lipophilic or “fat loving” oil molecules will join together floating on top of the water.

However, although they seem determined to stay apart, it is possible to mix oil and water in a more or less stable solution, and there are several examples of this in your kitchen. One of the more common examples where this occurs is in salad dressing.

To get the two main ingredients, vinegar (essentially water with acetic acid) and oil, to combine and stay that way for some amount of time involves two steps: breaking the oil into tiny droplets so it can be evenly dispersed throughout the mixture, and adding a mediator, called an emulsifier. The end solution is then known as emulsion.

Different emulsifiers work in different ways. Some, like lecithin (found in egg yolks), have both a hydrophobic end (that oil likes) and a hydrophilic end (that water likes); thus capable of bonding with both oil and water. So, as long as the oil droplets are sufficiently tiny and thoroughly dispersed (and enough emulsifier is used) the combination of oil and vinegar will remain as a relatively stable blend or emulsion.

On the other hand, an emulsifier like tomato paste has protein molecules that more or less coat the oil droplets and prevent them from bonding together, keeping them relatively well dispersed in the water. While it gets there differently, when well mixed, the end result is about the same.

So, when making a typical dressing, you first mix together the emulsifier (or emulsifiers) and the vinegar, and then slowly add a thin stream of oil while whisking or blending vigorously and constantly. Between the thin stream and determined whisking, the oil will be broken into tiny drops and dispersed; and, since the emulsifier is there to either coat the oil or bind it to the vinegar, it will remain suspended in the mixture for a good deal of time.