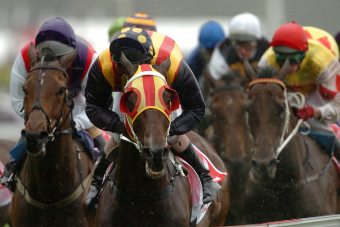 On June 26, 1975, professional gambler Barney Curley pulled off one of the most famous betting coups in all of sports. With careful planning and skillful execution, Curley and his compatriots won just over IR£300,000 (or about $2.6 million today) on the “slow but steady” mostly unknown horse named Yellow Sam.

Curley’s father, Charlie, had been a grocer before sinking deeply into debt via gambling on dog racing. Attempting a last ditch effort to get out of debt, he placed a large bet on a dog that had previously been made to run badly to lengthen his odds in his next race.  Unfortunately for Charlie, in that next race Charlie bet big on, the dog slipped and then died mid-race.  He lost everything.

Two years of Barney and his father working double shifts at a plastics factory finally resulted in the family’s debts being paid off, and Barney entering seminary.  It was here that he was introduced to horse racing. After a year-long bout with tuberculosis, he gave up plans to enter the priesthood, though remained heavily religious.

A series of odd jobs later, he found his niche where his father had so failed; but rather than betting on dogs, he picked horses. He stated in his autobiography, Barney Curley: Giving a Little Back, that he regarded each victory “as some kind of retribution for what had happened to my father… before.” And that he does it to “Beat the system, you know, beat those bookmakers, those smart-arses…”

This brings us to the bet that put Curley on the map. While he was well known at this point among bookies for a small string of relatively large victories, it was nothing compared to what he had in store for them in 1975.  Curley, who owned the horse in question, had him specially trained to run in an obscure National Hunt race (think hurdles and ditches like National Velvet) at Bellewstown, Ireland, where the jockeys were primarily amateurs.

Bellewstown had been chosen specifically because at this time it had only two telephone lines running to the track – one public and one private (for bookies). This is significant since at this time those telephones were the only contemporaneous communication between off-course bookies (who were taking bets), and the course bookies who determined the “starting price” (the odds that a horse would win).

In order to make the odds more favorable for Curley’s bet and lessen Yellow Sam’s handicap at the same time, allowing him to run lighter in the race, Curly ran him in several previous races in very poor conditions, where Sam never finished above eighth place. The plan worked, and Yellow Sam’s “starting price” was put at 20-1. He also got to run with a lighter load (reportedly as much as 10 kg less than many of Sam’s chief rivals in the race).

Of course, the 20-1 figure can change, depending on the betting, and if the course bookies were aware that large amounts were being bet on Yellow Sam (or that Curley was behind it), the odds would have changed dramatically. Unfortunately for the bookmakers, on the day of the race, there was a serious communication breakdown.

Completely orchestrated by Curley, “somehow” the private line was disabled. (It was later rumored that the line was cut, though previously Curley had been involved in another communications breakdown scheme where he managed to convince a British Telecom engineer to kill the phone lines to the racetrack in Thirsk, resulting in Curley netting a cool £80,000 after betting on a 14-1 shot.) However he did it this time, the only communication between the betting houses and the course bookies was now the single public telephone.

About a half an hour before the race began, Curley’s friend, Benny O’Hanlon, described by Curley as “a balding, heavily built kind of fellow, a tough sort that you wouldn’t want to get into an argument with” took over the phone booth, pretending to have a telephone conversation with a dying aunt. Apparently a good actor, or perhaps everyone present was just too intimidated to try to force him off the phone, they all waited sympathetically while he carried on his conversation. He, of course, continued talking until the race started.

Concurrently, off the course, Curley had friends, colleagues and mere acquaintances all stationed to place bets of between £50 – £300 at betting parlors across the country. To help ensure word of the scheme didn’t get out, Curley gave them all sealed instructions that were to only be opened once they received a phone call. About ten minutes before the race was to start, Curley set chain of phone calls in motion, calling a handful of accomplices, who in turn called the rest. Altogether, Curley had them bet just over £15,000 on Yellow Sam to win.

After making his call, he quickly headed over to Bellewstown, arriving just in time to watch the race.

Yellow Sam won by two and a half lengths.

After Yellow Sam’s victory, as there was nothing illegal about the “coup” (other than, perhaps, disabling the telephone line), the bookies had to pay-up. But to show their irritation, many paid him in single notes, resulting in 108 bags containing a total of just over IR£300,000.

As a result of the coup, Irish bookmakers changed their rules so that any bet over £100 had to be placed more than 30 minutes before the race.

As for Curley, he used the funds to expand his little enterprise, buying horses and continuing to bet on races, including pulling off several more big coups. Most notably, he recently orchestrated his most ambitious scheme yet, betting big on not just one relatively low ranked horse to win, but four horses to all win in a single day in a compounding bet. Three of the horses he owned, and the fourth he was closely connected with.

The whole thing took years to put together to find the perfect horses who, for various legitimate reasons, had all performed poorly leading up to the races in question and had been significantly undervalued by the bookmakers. (If the poor performance in previous races is for nefarious reasons, major trouble ensues for the individual orchestrating that kind of affair.) The horses in question also had to each be running specific races which would maximize their individual strengths given the conditions of the day at each race track. In the end, Curley chose Agapanthus at Brighton, Savaronola and Sommersturm in two different races at Wolverhampton, and Jeu De Roseau at Towcester.

Three of the four horses won, reportedly netting Curley around £3.9 million (about $6 million). (The bookies in question claimed it was drastically more than that, though they have a propensity to exaggerate in such things to entice others to bet in the future.)  Had the fourth horse won, the total would have reportedly been about five times what Curley ultimately won.

As to what Curley has done with all the money over the years and why he continues to bet (he managed to win another £2 million in 2014, though the details of how he pulled that one off are still scant), he stated, “I don’t have much regard for money. It was always the challenge – nothing else.”

The fact that he lives a mostly middle-class existence in his day-to-day life seems to back up the notion. But he’s not just sitting around with huge sums in the bank in his semi-retirement. He mostly focuses his winnings and time today on a charity he started in 1997, Direct Aid for Africa, where “Every penny of every pound donated… is put where it’s needed most. Those who help administer the charity or are involved in facilitating any of its projects do so entirely at their own expense. DAFA works predominantly in Zambia through a range of projects focusing on healthcare, education, and self-help,” with the goals of giving “underprivileged children the opportunity of obtaining an education,” help “support community based economic development projects,” and “help the terminally ill die with dignity.”

He stated of the motivation behind his charitable work, “In racing, people always want to get on your arm… The people giving their lives out there, they don’t want anything off you. And once you’ve been out, it draws you back – those children with their big brown eyes looking up at you, with nothing to eat.” And that when he meets his maker, he feels that, “The big thing He’ll be looking out for is how did we treat our fellow human beings?”