Mars: The Matchless Warship That Sank During Its First Battle

With irony equal to that of the unsinkable Titanic drowning on her maiden voyage, the Swedish warship, Mars, called “the Matchless,” was set afire, her armament exploded, and she sank during her first major sea battle. Lost for nearly 450 years, Mars has recently been found in the Baltic Sea, and archaeologists are giddy with the discovery.

In the 1560s, several of the Baltic states were at war, with Sweden on one side, and Denmark and Lübeck (of the Hanseatic League in Northern Germany) on the other. Continuing a practice begun years earlier, Sweden’s king, Erik XIV, funded his campaigns, at least in part, by confiscating Catholic church treasures.

Naval powerhouses, the warring states required strong fleets, and there was a push toward ever-larger ships. In 1563, as part of his drive to have the best navy, Erik commissioned the Mars, one of Europe’s first large, three-masted ships.

At 48 meters long and 13 wide, and displacing 1,800 tons, the Mars held an impressive array of armament. Spanning three decks as well as the crow’s nest, this included 53 canons and 50 smaller guns, an arsenal of incendiary grenades, round balls, chain shots and fire-balls. The ship also boasted a crew of nearly 700. Of course, there was a massive amount of gunpowder on board, as well, for use in the canons and other weapons.

According to legend, to make many of these canons, bells were taken from the Catholic churches in Swedish controlled lands and melted down and forged into the ship’s guns.

Regardless of the truth of that, this ship was launched in 1564 and shortly thereafter, on May 29, 1564, the Mars embarked on its first and only sea battle at Öland. After two days of fighting, the Mars had earned its nickname, the Matchless, as it led the fight against Denmark and Lübeck, who lost 16 ships and approximately 7,000 men in the battle.

The enemy rallied, and on May 31, 1564,  so many fireballs were lobbed onto the Mars’ deck that it was soon disabled sufficiently for the German’s to board. Of course, beyond the 350 or so sailors aboard the Mars, anyone boarding it also had to contend with its full compliment of about 450 soldiers. Unfortunately for both sides, a short time after being boarded, the Matchless’ gunpowder stores ignited, creating a heat so intense it reportedly caused the warship’s loaded canons to explode. The result of all of this was enough damage to the most powerful ship in the world that it sank, killing between 800 and 900 Swedish and Lübeckian sailors in the process.

Slipping into the Baltic in 75 meters of cold water, many Catholics at the time blamed the disaster on the supposed theft and re-use of the church bells.

For over four centuries, the Mars remained lost.

At between 50N and 65N latitude, the Baltic Sea is cold, and at the place where the Mars sank, just east of Öland Island, the currents are slow, the water brackish but with little sediment, and the mollusk typically responsible for rapidly destroying shipwrecks, the shipworm, is absent. The combination of all these factors is that, despite its long slumber in Davy Jones’ locker, the Mars is remarkably well preserved. 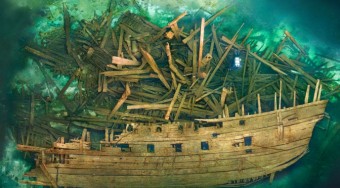 Discovered in 2011 by a group of divers, given the age and fragility of the Mars and its remaining contents, archaeologists have been hesitant to raise the ship. Rather, they have focused on photographing and digitally scanning the wreck with an eye toward producing 3-D reconstructions that are accurate to within 2 millimeters.

The Mars has been called by some “the missing link” because it marked the shift in Europe toward the massive, much more well-known warships of the 17th century; evidence for this is seen in the fact that, shortly after meeting the Mars at Öland, the Danes and Lübeckians were building their own massive, heavily armed ships, including the 2,100 displacement ton Fortuna and Grosse Adler (1567), and the nearly 3,500 displacement ton, St. Oluf (1573).

Note, however, that these Matchless champions of the time are tiny by today’s standards. In fact, the largest warships on the sea today, the United States Nimitz class super carriers, are over 330 meters long and 40 meters wide, sport flight decks of just over 75 meters, and displace approximately 97,000 tons when fully loaded.