This Day in History: August 21st- An Uprising 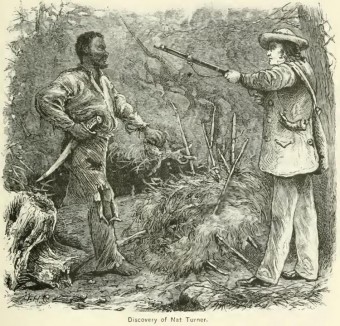 Nat Turner was born a slave on October 2, 1800 in Southampton County Virginia. He was deeply devotedly to his Christian faith and believed God spoke to him through visions and signs. One sign compelled him to return to his master after an escape attempt, another inspired the insurrection that would leave hundreds dead.

In the latter case, while working in the fields, Turner stated he  “heard a loud noise in the heavens, and the Spirit instantly appeared to me and said the Serpent was loosened, and Christ had laid down the yoke he had borne for the sins of men, and that I should take it on and fight against the Serpent, for the time was fast approaching when the first should be last and the last should be first.”

On February 11, 1831, Turner finally got the sign he was looking for that it was time to act after seeing a solar eclipse. He then began planning his uprising, which was supposed to begin on July 4th, but had to be delayed when Turner got sick.

Thus it was that early in the morning of August 21, 1831, in Southampton County Virginia, eight slaves led by Turner entered their owner’s home and murdered he and his family in their beds.

After Nat and his followers killed the Travis family, they went from plantation to plantation slaying every white person they encountered, regardless of age or sex. Eventually, Turner’s band of rebelling slaves numbered 70 or so. A young child who hid from the carnage in a fireplace was one of the very few among those attacked to survive.

As Turner and his group were heading for the nearby town of Jerusalem, a white militia complete with artillery reinforcement appeared. The rebels scattered and the insurrection was defeated. Nat Tuner managed to evade capture for two months by hiding in the woods of Southampton, but was eventually found by a farmer on Halloween. He surrendered peacefully.

His fate was inevitable – he was convicted of insurrection and hanged on November 11.

As for what happened in the interim, hysteria reigned after the rebellion. The state executed 56 black men, and the militia killed at minimum 100 more, though most historians think the actual number of black people killed in the aftermath was significantly higher.

Alluding to this, the September 6, 1831, edition of the Richmond Enquirer stated,

He [General Eppes] will not specify all the instances that he is bound to believe have occurred, but pass in silence what has happened, with the expression of his deepest sorrow, that any necessity should be supposed to have existed, to justify a single act of atrocity. But he feels himself bound to declare, and hereby announces to the troops and citizens, that no excuse will be allowed for any similar acts of violence, after the promulgation of this order, and further to declare, in the most explicit terms, that any who may attempt the repetition of such acts, shall be punished, if necessary, by the rigors of the articles of war.

Nevertheless, by this time the militia had beheaded anyone they even suspected of being involved in the uprising and stuck their decapitated heads on spikes. Many who had nothing to do with the rebellion paid with their lives anyway.

On the legal front, the Virginia General Assembly debated what was to be done about the situation to prevent it ever happening again.  Some suggested they should institute gradual emancipation of slaves over time- put an end to slavery in the region, and you put an end to slave uprisings. Unfortunately, the Assembly decided to go the other way with it and instead made it a crime for slaves or free blacks to learn to read or write. Additionally, slaves could only hold religious services if a white minister was present. Other southern states quickly followed suit.