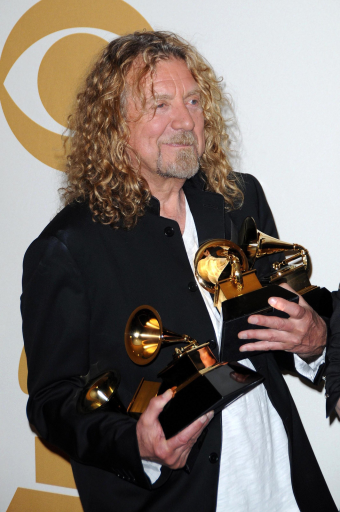 “I can’t moan about any of it. I had a great time in the goldfish bowl.” – Robert Plant

With his unmistakable vocal style and golden Adonis charisma, Robert Plant was the quintessential ‘70s front man. Part medieval troubadour and part decadent rock god, Plant – along with the rest of Led Zeppelin – redefined rock music. Instead of becoming a prisoner of his former persona, Robert has continued to grow as an artist through the decades.

Robert Plant’s incredible journey began on August 20, 1948, in West Bromwich, Staffordshire, England. His interest in music developed early. Robert was especially in to Elvis, and would stand between the curtains and French windows and imitate him. He said he liked the ambiance.

When Robert was in his mid-teens attending grammar school, he discovered the blues through Willie Dixon and Robert Johnson. He immersed himself in the Midlands blues scene while working a series of odds jobs. He then began playing with a variety of different bands, including Band of Joy, where he hooked up with a young drummer named John Bonham.

In 1968, Robert met the already successful Jimmy Page from the (recently disbanded) Yardbirds, who was looking to put together a group. When he first heard Plant sing, Jimmy immediately thought Robert must be a nightmare to deal with because otherwise he would have been a huge name already.

But luckily Robert was affable, laid-back and brought along a fantastic drummer, the aforementioned John Bonham, in one of the best package deals in music history. John Paul Jones, the seasoned studio musician who had worked with Jimmy in the past, also came aboard, and the greatest hard rock band of all time was lined up and ready to go.

Within a year-and-a-half, Plant went from working on a road crew in West Bromwich to fronting one of the biggest bands in the world. And Led Zeppelin did it without clever marketing campaigns, slick packaging or the adoration of the music critics, who generally panned or ignored them in the early days.

As Plant biographer Paul Rees explained: “They came to America and almost belligerently broke themselves into America. The record came out without the support of Rolling Stone or Creem, which was around at the time. They just did it. They were a people’s band. They were arguably the first people’s band.”

Riding high on the success of Led Zeppelin, things started to unravel in Robert’s personal life in 1975. He and his (now ex) wife Maureen were seriously injured in a car crash while visiting Greece. The band had to postpone the recording of their seventh album, “Presence”, and cancel their tour for later that year.

After a long convalescence, Robert was finally well enough to return to the road in 1977. But tragically, Led Zeppelin was playing in New Orleans when Plant’s five-year-old son Karac died suddenly of a stomach infection. Robert immediately retreated to his home in the Midlands and remained there for months. (He wrote the beautiful song “All My Love” that appears on Led Zeppelin’s final studio album, “In Through the Out Door”, in tribute to his son.)

In 1980, Plant’s chum John Bonham died of alcohol poisoning, another crushing personal blow. It also spelled the end of Led Zeppelin. For a time, Robert considered abandoning the music business to become a teacher. He was even accepted into a teacher training program.

But in the end, music won out. In the early 1980s Plant released several very successful albums, including “Pictures at Eleven” (1982) and “The Principle of Moments” (1983), which spawned the big hits “Big Log” and “In the Mood”.

He changed it up with “The Honeydrippers”, a one-off super-group he formed with Jeff Beck and Jimmy Page to record tunes with a Fifties vibe like “Sea of Love” and “Rockin’ at Midnite.”

Robert teamed up with his old bandmates quite often, playing on each other’s albums, doing the odd show here and there. He generally resisted playing any Led Zeppelin songs – until 1994 when Page and Plant reunited. They released the wildly successful “No Quarter” album, consisting of Led Zeppelin classics with new arrangements and some original tunes. Page and Plant embarked on an even more wildly successful tour the following year. An accompanying MTV Unplugged show was just the icing on the cake.

Plant continued to make great music, exploring folk with his band Strange Sensation and racking up four Grammy nominations and a Grammy Lifetime Achievement Award in 2005 as a member of Led Zeppelin. He toured with Strange Sensation through 2007 performing their music, his solo material, as well as classic Led Zeppelin jams.

Robert continues to make music, and indulging himself in his love of Welsh history and the Wolverhampton Wanderers football team (of which he is vice-president). He dances around any possible Led Zeppelin reunion, much to the frustration of Jimmy Page. But ultimately Robert sticks by his statement, “I know that bands that haven’t put out a record for 10 years are playing to 20,000 people a night. But that’s not the achievement.”