This Day in History: July 23rd- The Death of a Legend 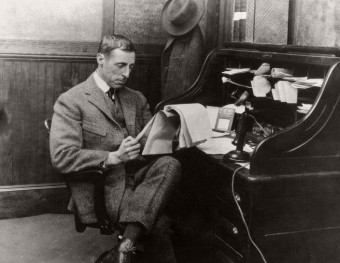 “To watch his work is like being witness to the beginning of melody, or the first conscious use of the lever or the wheel; the emergence, coordination, and first eloquence of language; the birth of an art: and to realize that this is all the work of one man.” – James Agee

David Wark Griffith is arguably the single most important individual in the development of film-making as an art-form. Charlie Chaplin, another film pioneer of incalculable importance, called Griffith “the teacher of us all.” Griffith was a visionary who recognized and exploited film not only as an expressive medium, but also as a catalyst for social change.

Born on January 22, 1875, in Crestwood, Kentucky, Griffith was the son of a Confederate Civil War veteran nicknamed “Roaring Jake.” His father died when he was ten, leaving the family in debt-stricken poverty. Griffith had little formal education but was a voracious reader and had his heart set on becoming a playwright. Towards this end, he left home to travel the country acting in minor productions. He was not only learning the actor’s craft but how to tell a story – and sell it to the masses.

In 1908, he joined the Biograph Company. He soon started directing and exploring the full capabilities of acting, editing and camera work. Before long, Griffith had introduced the long shot, fade-in, fade-out, close-up, full-shot, moving camera shot and flashback.

Inspired by the longer “spectacle” films being produced in Europe, Griffith left Biograph and made one of the first cinematic masterpieces, the Civil War epic “The Birth of a Nation” in 1915. Beautifully filmed and edited, the movie brought to life the events it depicted like no other before it. Unfortunately, it’s also surreally racist and even at the time was accused by many as contributing to the growth of the Ku Klux Klan.

Deeply stung by the criticisms of “The Birth of a Nation”, even though it was a monster success at the box office (adjusted for inflation bringing in almost $700 million), Griffith’s next film, the three and a half hour epic “Intolerance” (1916) was an indictment of racial prejudice throughout the ages. Unlike “Birth of a Nation,” however, “Intolerance” flopped.

“Broken Blossoms” was his first film release through United Artists, the production company he founded with Charlie Chaplin, Mary Pickford and Douglas Fairbanks in 1919. “Way Down East” came next in 1920 and by then Griffith’s reputation as America’s leading director was accepted by all.

But as the 1920s roared on, Griffith’s style became more old-fashioned in the era of the flapper. Although he had almost single-handedly invented the then modern cinema both artistically and technically, his Victorian sensibilities weren’t selling with the kiddies anymore. They were flocking to the polished and sophisticated pictures of Cecil B. DeMille starring woman-of-the-world Gloria Swanson. The sweet and innocent Lillian Gish had had her day. And so had D.W. Griffith.

The last 15 years of his life, Griffith was largely unable to find work in the industry he had helped create. He died in a Hollywood hotel room on July 23, 1948, almost forgotten by the masses.