This Day in History: July 21st- The “Destruction of All the World” 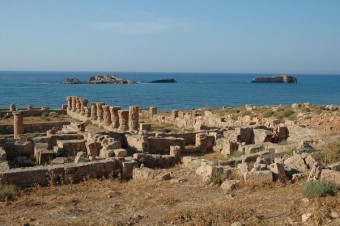 The impact of a catastrophic earthquake and mega-tsunami on July 21, 365 CE devastated Peloponnesus, the Greek Islands, Sicily, Cyprus, Libya, Palestine and Egypt. It completely leveled major cities and killed thousands of people. It also changed the topography of the Mediterranean region and, to some extent, the course of history.

The epicenter was located close to western Crete, along the Hellenic arc where the African tectonic plate pushes against the Aegean plate. This is near the Ionic Sea Islands – an area prone to strong, frequent earthquakes throughout recorded history. It is thought that this particular earthquake occurred as two tremors, the largest with a magnitude of an astounding 8.3.

Roman historian Ammianus Marcellinus was in Alexandria, Egypt and left this report of the event:

“Slightly after daybreak… the solidity of the whole earth was made to shake and shudder, and the sea was driven away, its waves were rolled back, and it disappeared, so that the abyss of the depths was uncovered and many-shaped varieties of sea-creatures were seen stuck in the slime; the great wastes of those valleys and mountains, which the very creation had dismissed beneath the vast whirlpools, at that moment, as it was given to be believed, looked up at the sun’s rays.

Many ships, then, were stranded as if on dry land, and people wandered at will about the paltry remains of the waters to collect fish and the like in their hands; then the roaring sea as if insulted by its repulse rises back in turn, and through the teeming shoals dashed itself violently on islands and extensive tracts of the mainland, and flattened innumerable buildings in towns or wherever they were found.

Thus in the raging conflict of the elements, the face of the earth was changed to reveal wondrous sights. For the mass of waters returning when least expected killed many thousands by drowning, and with the tides whipped up to a height as they rushed back, some ships, after the anger of the watery element had grown old, were seen to have sunk, and the bodies of people killed in shipwrecks lay there, faces up or down.

Other huge ships, thrust out by the mad blasts, perched on the roofs of houses, as happened at Alexandria, and others were hurled nearly two miles from the shore, like the Laconian vessel near the town of Methone which I saw when I passed by, yawning apart from long decay.”

He went on to describe the earthquake and tsunami as the “destruction of all the world.”

While that, perhaps, proves that sensationalizing catastrophic events isn’t limited to modern media, the devastation in the region was very real and was unleashed at a very critical juncture in the waning days of the Roman Empire. Riddled with war and political conflict, the incredible destruction wrought by the disaster was one of many key factors that is considered to have sped up the final division between the Eastern and Western Empires.