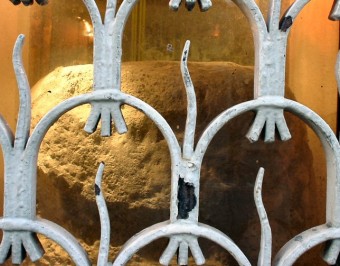 Sitting in the heart of London since long before anyone can remember, theories regarding the London Stone range from Roman ruin, to Druidic icon to a talisman of good fortune.

Although many point to John Stow’s Survey of London (1598), where he sets the 10th century as the first mention of the stone in print (he claims he found a mention of the stone in a document from the 900s AD), others feel more comfortable citing a list of Canterbury Cathedral’s properties from somewhere around the turn of the 12th centuries, where it lists Eadwaker æt lundene stane.

Regardless, by medieval times, the London Stone was a fixture in the city, so much so that residents even incorporated it into their names, such as Ailwin of London Stone. Clearly important, by the 15th century the landmark was seen as a symbol for London, and perhaps England; this helps explain why, when Jack Cade led a rebellion against Henry VI in 1450, he reportedly struck the London Stone with his sword in claiming the city for himself, as immortalized by Shakespeare in King Henry VI, Part II, Act IV, Scene VI.

In the 16th century, one popular theory for the stone’s origins was that it had been used by the Roman’s during their occupation (approximately 43 AD – 410 AD) as a millarium or central milestone from which all distances were measured. Charles Dickens even cited this explanation in his Dictionary of London (1879).

During the 18th century, some were speculating that the stone was used in worship by the Druids, although there is no evidence to support it.

In the 19th century, as interest in spiritualism became more widespread, some theorized that the London Stone was a Palladium or talisman dating back to Roman times and Britain’s legendary founder. It was during this time that the now well-known saying appeared: “So long as the Stone of Brutus is safe, so long shall London flourish.”

By the 20th century, serious archaeologists began digging into the London Stone’s origins, and some found that it is situated at the center, or at the gate, of where a large Roman structure, sometimes identified as a Governor’s palace or pretorium, had been.

Today, those who believe in ley lines, straight “lines” that connect sites of historical or geographical significance, claim that the London Stone is transected by several of these lines, while others have posited that the stone was set in the center of the old Roman city, in homage to Jupiter.