This Day in History: May 15th- Nothing Less 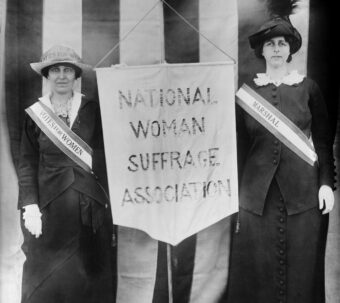 On May 15, 1869, The National Woman Suffrage Association was formed in New York City. The group was the result of ideological and political disagreements between two factions of the suffrage movement, one difference being whether to support the 15th amendment, which prohibited the government from denying citizens the right to vote, regardless of their “race, color, or previous condition of servitude.”

The first signs of dissension were evident as early as 1860, but for all intents and purposes the women’s suffrage movement took a hiatus during the Civil War. During the post-war era, the movement re-grouped as the American Equal Rights Association and set up a new platform.

The Association was divided on how to proceed when faced with the Reconstruction amendments which entailed the inclusion of the word “male” in the United States Constitution for the first time, with Susan B. Anthony and Elizabeth Cady Stanton, in an open letter to the 1868 Democratic National Convention, stating, “While the dominant party has with one hand lifted up two million black men and crowned them with the honor and dignity of citizenship, with the other it has dethroned fifteen million white women—their own mothers and sisters, their own wives and daughters—and cast them under the heel of the lowest orders of manhood.”

The American Equal Rights Association eventually split over this issue. One faction insisted that, as citizens, women already inherently had the right to vote if the 15th amendment were to pass and felt that close ties must be maintained to abolitionists and the Republican party. The other believed that it was imperative that a woman’s right to vote be established at the same time as a black man’s and that continuing strong ties with the abolitionist movement was unnecessary and potentially detrimental, given certain perceived previous betrayals, such as the aforementioned use of “male” in amendments.

Supporters of the latter perspective included women such as Susan B. Anthony and Elizabeth Cady Stanton, who went on to form the National Woman Suffrage Association, also known as “the National,” with Stanton serving as the organization’s first president.

Their weekly newsletter, The Revolution, although short-lived, packed quite a punch. Its purpose was to aid the working women of America, and reflected the agenda of the National. It was, however, not without controversy, even among other women’s suffragists. For instance, Stanton stated in The Revolution (in a not-so-subtle attempt to appeal to white Southerners and play on certain people’s fears that they’d soon be marginalized in government) “American women of wealth, education, virtue and refinement, if you do not wish the lower orders of Chinese, Africans, Germans and Irish, with their low ideas of womanhood to make laws for you and your daughters … demand that women too shall be represented in government.”

(Women’s suffragist supporter and husband to American Woman Suffrage Association leader Lucy Stone, Henry Blackwell, also made the argument to Southern legislatures that if they granted women the right to vote at the same time as black people, “the political supremacy of your white race will remain unchanged.”)

While these types of racist appeals may seem curious given that African Americans and women’s rights activists had previously often fought hand in hand for their rights, it should be noted that there were other reasons for making such statements, even beyond just common prejudices of the day.  The National suffragists, particularly, were afraid of what would happen if black people gained the right to vote first. You see, at the time there was a strong sentiment that black men, on the whole, would vote against the right for women to vote.

As to whether they were correct in their theory or not, it’s difficult to discern. The great Frederick Douglas, for one, strongly supported women’s suffrage and was a pivotal figure in convincing people at the first women’s rights convention in the U.S. (organized by Stanton and Lucretia Mott) that women must fight for the right to vote; this was something Stanton was heavily pushing for, but Mott thought “would make us ridiculous.” Douglas stated at that meeting, that if women could not vote, he could not in good conscience himself accept the right to vote.  And that

However, though Douglas was a strong supporter of a woman’s right to vote, he did imply that he believed the National suffragists were correct on the idea that black men would largely vote against them when given the right to vote, stating in the May 15, 1868 edition of the New York Tribune, “The race to which I belong have not generally taken the right ground on this question.”

Whatever the case, during the country’s Centennial celebration in Virginia in 1876, members of the National approached the stage after the Declaration of Independence was read. They presented the presiding officer with a document called the Declaration of Rights of the Women of the United States. The article listed the natural rights of women the government was infringing upon that were its duty to uphold as part of the social contract. It went on to state,

It was the boast of the founders of the republic, that the rights for which they contended, were the rights of human nature. If these rights are ignored in the case of one half the people, the nation is surely preparing for its own downfall… Woman has not been a heedless spectator of the events of this century, nor a dull listener to the grand arguments for the equal rights of humanity. From the earliest history of our country, woman has shown equal devotion with man to the cause of freedom, and has stood firmly by his side in its defence. Together, they have made this country what it is. Woman’s wealth, thought and labor have cemented the stones of every monument man has reared to liberty…

We ask of our rulers, at this hour, no special favors, no special privileges, no special legislation. We ask justice, we ask equality, we ask that all the civil and political rights that belong to citizens of the United States, be guaranteed to us and our daughters forever.

One hundred years after Abigail Adams implored her husband John to “remember the ladies” (“If particular care and attention is not paid to the ladies, we are determined to foment a rebellion, and will not hold ourselves bound by any laws in which we have no voice or representation.”), women were indeed fighting tooth and nail for their rights.

In the end, despite numerous federal amendments drafted after these events calling for women’s suffrage, it wasn’t until May of 1919 that it was finally put in place. That year, President Woodrow Wilson called for a special session of congress with the purpose of passing the suffrage bill. It passed with 42 more votes than necessary in the House.  It then passed 56 to 25 in the Senate.  The states themselves ratified it with Illinois, Wisconsin, and Michigan being the first and Tennessee the last of the needed 36 states to ratify the bill.  Thus, in the summer of 1920, the 19th Amendment to the Constitution was put in place, (finally) allowing women in all states the right to vote.