This Day in History: April 7th- The Great American Showman 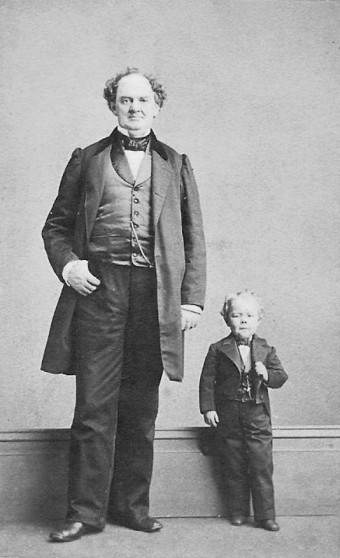 “Every crowd has a silver lining” – P.T. Barnum

“The Great American Showman”, P.T. Barnum, died on April 7, 1891. Considered one of the most important figures in America’s entertainment history, LIFE magazine also dubbed him “the patron saint of promoters.” Always the consummate businessman, it’s said that his last thoughts were about the “Barnum & Bailey Greatest Show On Earth.” The show was appearing at New York City’s Madison Square Garden, and Barnum requested that someone “ask Bailey what the box office was at the Garden last night.”

P.T. Barnum, born on July 5, 1810 in Bethel, Connecticut, was 61 years old before he started “The Greatest Show on Earth,” but began his very successful career peddling lottery tickets and rum at the tender age of 12. (Note: Colonel Sanders of KFC was also in his 60s before founding his chicken empire. In Sanders’ case, he was broke and living in his car at the time as well. See: Was Colonel Sanders Really a Colonel?)

In any event, long before the “Greatest Show”, in 1835, Barnum paid the sum of $1,000 (about $22.6K today) for an elderly slave named Joice Heth, who claimed she was 161 years old and had once served as George Washington’s nurse.  Given that Washington died in 1799, it’s not completely impossible that the woman really did serve as his nurse at some point, though of course the 161 years old part seems more than a little suspect. 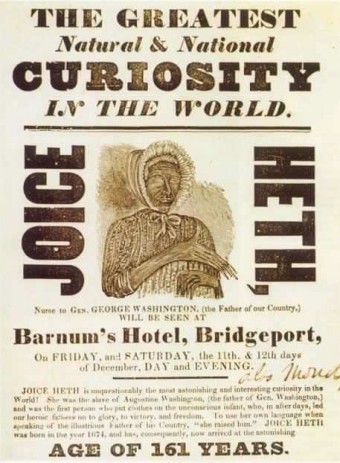 But the important thing here was that Heth certainly looked 161 years old, and had encyclopedic knowledge about Washington and his life and times. At her peak, Barnum managed to average about $1,500 a week off of the aged Joice Heth in NYC, and when interest began to wane, he hired a plate-spinning acrobat he named “Signor Vivalla”, promoted the heck out of him, and hit the road with both of his money makers- one a slave, the other a hired hand.

In late 1841, Barnum purchased Scudder’s American Museum in Manhattan and renamed it as Barnum’s American Museum, which he filled with hundreds of oddities of dubious merits. The following year, he met Charles Sherwood Stratton, a tiny four-year-old boy who weighed 15 pounds and stood 25 inches tall. Seeing dollar signs dancing all around the kid, Barnum taught the child to sing and dance and presented him to the public as “General Tom Thumb.” A tour of Europe and an audience with Queen Victoria was the icing on the cake.

Barnum’s fame had always centered on low-brow attractions, but that changed when he presented Swedish opera sensation Jenny Lind to the American public in 1850. After he heard the buzz about her sold-out gigs in Europe, Barnum signed Lind sight unseen (and unheard) for 150 shows in the US and Canada at $1000 a pop. In the end, he made about half a million dollars (about fourteen million dollars today) on the deal.

The American Museum burned down in 1868, but he gathered many of his old crew and opened P.T. Barnum’s Grand Traveling Museum, Menagerie, Caravan, and Circus. He found a permanent home for his “Greatest Show on Earth” at the New York Hippodrome in 1874 (which later became Madison Square Garden.) It was the largest circus in American history.

In 1881, Barnum entered into a partnership with circus managers James Bailey and James Hutchinson. The next year the Circus acquired Jumbo, an 11 1/2-foot, 6-1/2 ton elephant, “The Towering Monarch of His Mighty Race, Whose Like the World Will Never See Again.” Jumbo was a huge draw for the show until his tragic death three years later. (See: Where the Word “Jumbo” Came From for more on the mammoth elephant and his untimely demise.)

The living legend agreed to hand over everyday control of the circus in 1887. It was renamed Barnum & Bailey Greatest Show on Earth.

P.T Barnum had observed that the press says nice things about people after they die, so The New York Sun ran a mock obituary for Barnum several weeks before he died. The headline on their front page announced:

Great And Only Barnum — He Wanted To Read His Obituary — Here It Is.

P.T. Barnum died in his sleep on April 7, 1891, and was buried in Bridgeport, Connecticut.