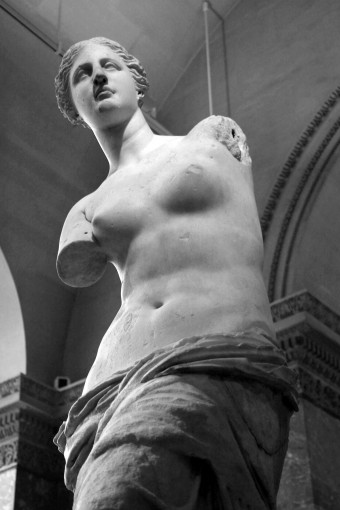 On April 8, 1820, Oliver Voutier was digging on the island of Milos in the Aegean Sea with two French soldiers under his command at the site of an ancient Greek theater. He happened to see local farmer Yorgos Kentrotas stop and stare in awe while out gathering stones. The officer followed the farmer’s gaze, spotting a part of a broken segment of a sculpture.

Voutier paid Kentrotas a small amount of money to continue excavating the remaining portions of the statue. As more fragments emerged, Voutier became more and more certain he had a bonafide masterpiece on his hands. Getting this treasure to France would require the involvement of the French government, which then had jurisdiction over Milos. Once the red tape was dealt with, the statue, none other than the Venus de Milo, was presented to King Louis XVIII, and then brought to the Louvre in 1821, where it resides today.

The Venus de Milo is believed to date from around 150 B.C., although soon after its discovery, experts erroneously claimed it originated from the much earlier Classical period. The sculpture’s plinth, however, proved it to be from the considerably later Hellenistic era, causing many “my bads” and much embarrassment by certain members of the archeological and artistic communities. It also raised a lot of eyebrows when the plinth suddenly went missing. They saved a bit of face, however, when everyone conceded that the statue was a Hellenistic work that drew heavily from the Classical era.

Along with the plinth, the Venus de Milo was also missing its arms and hands. It has been speculated that one hand may have been holding an apple, the symbol of the island of Minos.  Whatever the case, the goddess’s likeness, as captured in the Venus de Milo, is certainly one of the most recognizable works of art from antiquity.

The artwork’s fame is thanks not only to its undeniable beauty and historical relevance, but also due in part to France’s unremitting PR campaign to promote its prominence after the country lost the notable Venus de Medici to Florence, and the Apollo Belvedere to the Vatican. The Venus de Milo helped France and the Louvre hold its proverbial head high in the art world once more.