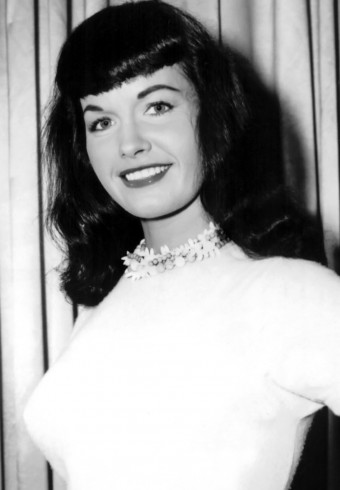 Bettie Page, legendary pin-up girl and pop culture icon, was born in Nashville, Tennessee on April 22, 1923. Gracing millions of garage walls and locker rooms, blued-eyed, raven-haired beauty Bettie Page was the most famous pin-up model of the 1950s. Although she disappeared from the public eye in 1957, she continues to influence female performers and fashion designers over half a century later. Rocking her trademark bangs, Bettie’s combination of smoldering sexuality and girl-next-door sweetness made her irresistible.

Bright, as well as beautiful, Bettie was voted “most likely to succeed” by her high school graduating class, and earned a B.A. in education. (Bettie said she had little success in the classroom as she had trouble dealing with male students – cue “Hot for Teacher”.) She was always interested in fashion as well and worked as a model while living in San Francisco with her first husband. By 1947, she was divorced and living in New York. A walk along Coney Island Beach three years later would change her life forever.

Bettie happened upon Jerry Tibbs, a cop and amateur photographer who put together her first portfolio. Her meeting with Tibbs led to contacts with other photographers, and within months Bettie’s career as a pin-up queen was well on its way.

Her photos appeared in countless magazines and she strutted her stuff in several leather and bondage fetish films. Bettie was the Playboy centerfold in January 1955, and Hugh Hefner became a forever fan. Her likeness was everywhere, and she was proclaimed “Miss Pinup Girl of the World.”

Bettie often did outdoor photo shoots in Florida, posing on boats and at the beach, which she loved. In 1957, she left New York and moved to Florida for good, sick and tired of a prudish United States Senate Committee investigation launched two years earlier against her harmless cheesecake pictures. Fifties America loved to be titillated – they just had to be complete hypocrites about it.

Two more failed marriages followed before a move to California in 1978. Bettie fell upon hard times, struggling with mental illness and living on the brink of poverty. When strangers would ask if she was Bettie Page, she would plead ignorance and ask, “Who’s that?”

She was rediscovered as a modeling icon in the ‘80s and ‘90s. Comic books featured characters resembling Bettie, and pop artists like Madonna were emulating her unique look and fetish films in music videos. With the help of Hugh Hefner, Bettie enjoyed a financial windfall from her name and image the second time around, and never had money problems again.

People were intrigued by her sudden disappearance back in 1957, and sought her out to see what became of her, as many thought she had died. She occasionally sat down for an interview, delighting the lucky recipient with a taste of her delicious southern drawl. She definitely would not, however, allow any photographs to be taken. She explained to the Los Angeles times in 2006: “I want to be remembered as a woman who changed people’s perspectives concerning nudity in its natural form.”

It was her right to be remembered as beautiful, bodacious Bettie from back in the day, after all.