This Day in History: April 16th- The Fall of Masada 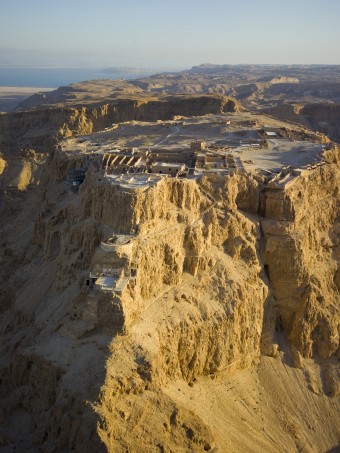 On a desolate mountaintop in Judea overlooking the Red Sea, a bitter battle of nerves was about to reach its conclusion. On April 16, 73 C.E., Jewish zealots finally succumbed to the Roman siege at Masada after at least three years of resistance; but they refused to be taken alive.

According to contemporary historian Josephus Flavius, the only source for the story, the fortress of Masada was constructed with all the mod cons for comfortable desert living by Herod the Great between 37 and 31 B.C.E. When the Jews began revolting against the Romans in 66 C.E., some of the rebels overpowered the Roman troops at Masada and overtook the fortress.

After the Destruction of the Temple and Fall of Jerusalem in 70 C.E., angry refugees from the city poured into Masada, joining the hold-outs hunkered down in the fortress. And there they stayed, staging surprise raids and harassing the Romans.

But three years later, Roman governor Flavius Silva showed up at Masada with the Tenth Legion, a few auxiliary units, and thousands of Jewish prisoners-of-war to strike some fear into the hearts of the rebels. They settled in for a nice long stay, making camps at the base of the fortress. Then they got to work constructing a circumvallation wall and a rampart made of tons of stone and dirt.

When they got out the battering ram, it was soon apparent that the Romans would be successful in breaching Masada’s walls.

While Josephus Flavius’ account has been contested by some archaeologists, according to Flavius, the Zealots’ leader, Elazar ben Yair, decided mass suicide was preferable to what the Romans no doubt had in store for them. Elazar assured his followers that “a glorious death is preferable to a life of infamy.”

Two women and several children reportedly survived the slaughter by hiding inside a cistern. The surviving women supposedly recounted the logistics of the events to Flavius. It began with each man killing his own family. Next, ten men were picked to kill those remaining. Then the surviving ten drew lots to choose who would kill the last nine. The last man standing was to kill himself.

Why the elaborate method of, essentially, suicide? Because suicide is prohibited in Judaism.  In the method chosen, only one man had to actually commit suicide. The rest were technically slaughtered.

Before the carnage, Elazar supposedly delivered a moving final speech:

Since we long ago resolved never to be servants to the Romans, nor to any other than to God Himself, Who alone is the true and just Lord of mankind, the time is now come that obliges us to make that resolution true in practice …We were the very first that revolted, and we are the last to fight against them; and I cannot but esteem it as a favor that God has granted us, that it is still in our power to die bravely, and in a state of freedom.

Although archaeological evidence disputes this, according to Flavius, those within the fortress did not destroy their ample stores of food, so it would be clear their motivation was pride and not desperation.

While Flavius’ account seems exaggerated, at least based on archaeological evidence, and some even contest that any mass suicide happened at all, for many, Masada is highly symbolic of the Jewish struggle for freedom within their homeland. When Israel gained independence as a nation in 1948, the saga of Masada was not forgotten. After basic training, Israeli troops took their oaths at the fortress, swearing, “Masada shall not fall again.”