The Origin of the Word Bimbo

March 3, 2015 Melissa
Jillian A. asks: Who invented the word bimbo? 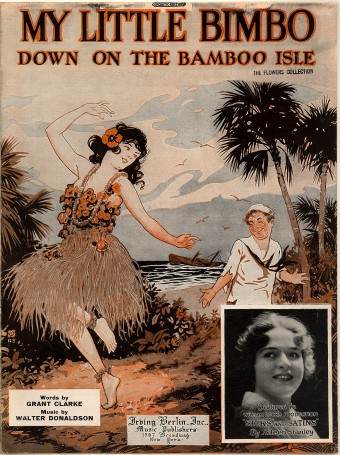 Depending on whom you ask, bimbo can be an insult or just a description. Usually implying a lack of intelligence, and often combined with physical attractiveness and promiscuity, today bimbo is often used to describe someone who isn’t that bright, and gets by on her (or his) looks (or wealth). And this meaning isn’t too far away from the word’s origins.

The Oxford English Dictionary credits the November issue of The American Magazine (page 69) as the first to put bimbo into print with the line: “Nothing but the most heroic measures will save the poor bimbo.”

Originally referring to a foolish or inconsequential man, and in particular in a contemptuous way, bimbo was derived from the Italian word bambino (baby), and it retained this meaning through the early part of the 20th century, as seen in P.G. Wodehouse’s Bill the Conqueror (1924) where he referred to an entitled doofus as “the bimbo Pyke.”

At this same time, bimbo was also applied to women. In 1920, Irving Berlin published a song by Grant Clarke (words) and Walter Donaldson (music) titled My Little Bimbo Down on the Bamboo Isle. Although not explicit, this use of bimbo incorporates the connotations of attractiveness and sexual promiscuity, as the illustrated cover of the sheet music depicts a carefree, pretty, dancing woman making eyes with a leering young sailor.

It was also being used to describe a voluptuous woman in 1920, as shown in Irving Zeiman’s The American Burlesque Show: “This Dix bimbo is a dangerous woman . . . a sassy girl with . . . more than a figure – a physique.”

Jack Conway of Vanity Fair is reputed to have popularized the word with the connotation of an unintelligent but sexually attractive woman in the late 1920s, and by 1937, it was being paired with blond hair, such as in Detective Fiction Weekly’s: “We found Durken and French LaSeur, seated at a table . . .with a pair of blond bimboes beside them.”

Going in and out of fashion for several decades, bimbo had a resurgence in the late 1980s, with 1987 being dubbed “The Year of the Bimbo” as a series of scandals that year all prominently featured beautiful young women right at the center of the controversies.

Although likely not a bimbo, just pretty, Fawn Hall, secretary to the man at the heart of the Iran-Contra Affair, Lt. Col. Oliver North, rose to prominence when she was called to testify to Congress over document shredding. Tall, shapely and beautiful, with a mane of blonde hair, while many assumed Ms. Hall was Colonel North’s bimbo, there has never been any evidence she was anything more than an employee.

Not stupid, but perhaps meeting some of the criteria of a bimbo was Donna Rice. In 1987, popular Senator Gary Hart was the leading contender for the Democratic nomination for President when rumors that he was having an extra-marital affair (a truly scandalous accusation then) began to surface. When questioned about them, Senator Hart actually challenged the media to put him under surveillance, they did, and they discovered Ms. Rice.

Blond and beautiful, Ms. Rice was observed by two Miami Herald reporters leaving Mr. Hart’s townhome in Washington, D.C. (presumably Mrs. Hart was not in the nation’s capital at the time). Although the two denied an affair, at about this time, a photograph of Donna Rice, showing a lot of leg and sitting on Senator Hart’s lap, on a yacht called (and I’m not making this up) Monkey Business was published. Hart’s campaign was (excuse the pun) sunk; he withdrew from the race, Massachusetts Governor Michael Dukakis got the nomination, and he lost to George H.W. Bush in the 1988 election. Donna Rice refused most media offers, including to do an interview with Playboy, but did become the face of No Excuses jeans for awhile.

Hands-down the bimbo-iest of the scandals of 1987, however, was the stir created around the PTL Club. Short for “praise the lord,” PTL was a hugely popular Christian television show led by evangelists Jim and Tammy Faye Bakker.

Tammy Faye was a remarkable character with dyed hair, a “baby-talk” voice and more eye makeup than a roomful of Kardashians; as such, she easily met the basic qualifications of a bimbo.

Her husband, the preacher, Jim, was also a bimbo but for a different reason. Revealed in 1987, Jim and another man were accused of drugging and raping a 21-year-old church secretary, Jessica Hahn, in 1980. Although the resulting scandal ruined Jim’s career, he proclaimed his innocence of any crime, but eventually admitted he had a consensual sexual relationship with the young lady.

Of all the bimbos that year, Jessica Hahn appears to have best met most of the criteria. Well-endowed with a voluptuous figure, big 80’s hair and lots of makeup, Jessica capitalized on her scandal by building a career centered around her sexuality, which included posing in Playboy, appearing in Sam Kinison’s video for “Wild Thing” and becoming a frequent guest on The Howard Stern Show. Perfectly capturing the bimbos dilemma, Ms. Hahn is quoted as saying, “people will always consider me a cartoon character, a bimbo. They will never give me credit,” but that “the scandal happened and I made the best of it.”