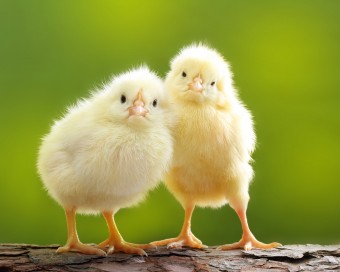 Unless you didn’t quite get enough info from the title- yes, it is entirely possible for a chicken to lay an egg that contains another fully developed egg, what we now officially dub an Xzibit Egg. A wonderfully bizarre Matryoshka doll made of protein and disgusting (when you think about it) deliciousness.

As you may or may not know, a chicken is capable of laying hundreds of eggs in a given year and the presence of a male isn’t needed or required for this to happen. It’s only necessary if you want to have the eggs fertilised. As such, hens can happily lay a near endless stream of eggs throughout their lives with no problem, assuming they don’t decide to start brooding. To make sure this doesn’t happen, one simply has to remove the laid eggs regularly.

What you might not know, though, is that a chicken can’t lay an egg without one key thing- light. It turns out, there is a photo-receptive gland in a chicken’s eye that, when exposed to sufficient light, ultimately triggers the release of the hormone that in turn spurs egg production.  Particularly in winter months in certain areas, depending on the type of chicken, this may mean that naturally the chicken will not get sufficient light in the winter to produce enough of the necessary hormone to spur egg production, conserving the resources of the chicken in times when food in nature is scarce.  Luckily for farmers and French Toast lovers everywhere, artificial light works just as well as natural in this case. (And, note: French Toast Most Definitely was Not Invented by the French)

Once the egg has been released into the chicken’s system, it is joined by a small disk of nutritional material better known as the yolk, all while the chicken’s uterus fills with albumen (egg white). Once this cocktail is done floating around in the chicken’s system, a thin, inner membrane from the inside of the chicken’s uterus forms around the egg. After this, a more sturdy, outer membrane mostly composed of calcium carbonate forms around the whole thing, creating a chicken egg as we know it. This ultimately gets expelled from the same orifice that the chicken poops out of. Yes, this is what you’re scrambling up and ingesting in the morning.

All that said, in juvenile chickens, this incredibly complex and remarkably efficient (considering a chicken can lay almost an egg per day) process can get muddled, and while a chicken is in the middle of forming one egg, their bodies can sometimes send the signal to create a second before the first is done forming. Eggs formed in this way are characterised by having two (or more) yolks. As such, they’re unimaginatively referred to as “double/triple/etc. yolk eggs”. We only say unimaginatively because eggs without a yolk are given a much more inventive name of “fart eggs”, or sometimes in polite company “wind eggs”.

This brings us back to the title of this post. Double shelled eggs are much more rare than multi-yolked eggs and, as explained in this New Scientist video, occur when abnormal contractions result in the egg getting pushed back up into the uterus. The egg can then potentially stick around for a second round of full egg development, before ultimately being expelled.

Though rare, documented cases, such as the one mentioned by the curator of the Natural History Museum’s egg collection in the aforelinked New Scientist video do, of course, exist. You can see a purported opening of one of these in this video. 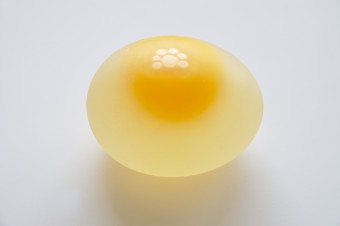