What Does “P.U.” (As in Something Smelly) Stand For?

February 3, 2015 Melissa
Mark C. asks: What does the letters in the stinky term P.U. stand for? 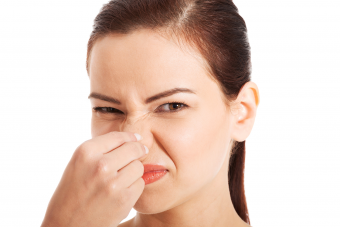 Often used to accuse someone of exceeding his allotted level of funk, P.U. is, surprisingly, not an acronym, but, rather, likely was derived simply from the pronunciation of its parent word.

Dating back to the early 17th century, a common exclamation of contempt for a foul odor was pyoo. As English spelling had yet to become standardized, this word was also written as pue, peugh, pew and pue. Although each variant was correctly pronounced pyü, often in practice, and particularly to express outrage, both syllables were stretched out with the pronunciation: pē-‘ū (pee-YOU), which, over the years, has been changed into P.U.

As for where the 17th century versions came from, this is anybody’s guess, with some linguists postulating that perhaps it came from the Latin “puteo,” meaning “stink, rotten, putrid.”

If you’re wondering about the origins of some of the other of the many words we have to describe things that smell bad, stink dates back to the mid-13th century, as does smell (although smelly is a relatively recent invention, first being seen in the mid-19th century).

Stench dates to the dawn of the 13th century and derives from Proto-Germanic, *stankwiz, and is related to the Old High German stanch, as well as the Old Saxon, stanc.

Fetid was a child of the Latin word fetidus, and dates back to the early 15th century, as does its cousin (now in disuse), fetor.

Reek, which originally was a verb meaning “to smoke,” took on the connotation of “to smell bad” in the 17th century.

Meaning just “a smell or scent,” odor entered the English language about 1300 and came from the Old French odor and the Anglo-French, odour, themselves children of the Latin word, odor, of the same meaning.

Redolent, also doesn’t necessarily mean a bad odor, and it dates back to the early 15th century and Old French, as well as the Latin word, redolentem.

Malodorous, was created in the 19th century by simply combining the common prefix, mal-, with odorous.

A word that is far older than I would’ve expected, funk, meaning “bad smell,” has been around since the early 17th century and is related to a French word, funkière, which means “to smoke.” It has been used to describe a particular style of music since 1959.